Here are embeds to my two most recent videos for Newsbud.  They pair together nicely as they track the evolving stories on Pakistan/Afghanistan and North Korea.  Trump may be sucking all the oxygen out of the mediasphere, but the usual suspects are still out there conducting the usual business of murder and mayhem.

The most recent video, While America Freaks Out, Asia Quietly Goes Crazy, also covers a couple stories that will achieve a higher profile in the news as the year goes on: Xinjiang and the Philippines.

In the earlier video, Asian States Play the Murder Card; Is the War Card Next? I have some fun in the closing bit with Asian monster movies in general—Pulgasari should be part of every kaiju fan’s cinematic vocabulary--and China’s The Great Wall in particular.

The Great Wall got slagged in the US as a piece of Chinese cinematic presumption.  Hollywood blockbusters are America’s soft power secret sauce, and woe to any Communist interloper that tries to steal the recipe.  Chinese audiences weren't quite nuts about it either, to be frank.

The interesting backstory to TGW is that China, via Wanda Group, has already mastered the exhibition end of the equation.  Wanda is the biggest deal in Chinese cinema, controlling about 14% of the market about half the screens .  It’s also embarked on an acquisition binge in the US, Europe, and Asia and expects to control 20% of global box office in a few years.

Wanda wants to be able to extort favorable distribution deals from the major studios (smart!) and its supremo, Wang Jianlin, has also expressed the desire to own a studio (nonononoNO!).  Apparently, in our brave new world of content creation and distribution this is not the anti-trust red flag it used to be.

The Great Wall was Wang’s first big-ticket foray into content creation, via Legendary Pictures, a Hollywood production outfit Wanda acquired a couple years ago.  Despite an anemic $36 million and change at the US box office, TGW pulled in $300 globally.

When one considers that maybe Wanda through its cinema operation was on both sides of that take in maybe one-third of the theaters (as opposed the share of receipts it gets as simply the content creator), I’m thinking The Great Wall maybe didn’t earn back all of its rumored $150 million production budget plus its apparently supersized promotional budget, but it’s not a gigantic debacle for Wang.

The movie itself: not as bad as people say, in my opinion.  Of course, my expectations were low since LA hated the film, and my generous impulses were also shaped by the wonder of an $8 movie ticket, which is the price of admission on Tuesdays at Regal Cinemas flagship cinemas down at Staples Center/LA Live.  By Grabthar’s hammer, what a savings!

The movie’s debt to World War Z is pretty unambiguous.  Well, Max Brooks, the guy who wrote World War Z apparently cooked up The Great Wall with Legendary’s ex-jefe (now canned) Thomas Tull, and got story credit.  The basic theme of hordes threatening civilization is quite World War Z esque, and the visuals of monsters climbing the Great Wall during the main attack is, shall I say, embarrassingly similar to that zombie assault on the Israeli wall in WWZ.

Once this movie got into the hands of Zhang Yimou, I think he visualized it as a wuxia spectacle.  Wuxia (martial hero movies) often involve badass bravos doing awesome sh*t in the riverlands, marshes, and mountains beyond the stultifying reach of Chinese state and society.

And in The Great World we are introduced into a wuxia environment of a secret martial order dedicated to garrisoning the Great Wall and, every sixty years, fighting off a herd of ravenous lizard monsters that basically just want to eat the world.

The Great Wall resists subtext, thereby frustrating cineastes, film buffs, and guys who post their opinions on the Internet.  Don’t try looking for metaphors of the Mongol threat or the Russian menace, in my opinion.  The monsters are there and the wall is there mainly so this band of brothers and sisters can do cool, crazy-heroic stuff together.  And they do it pretty nicely, in my opinion.

I didn’t have too much of a “Matt Damon white savior” problem, especially in what film people call “the second act” i.e. after everybody’s introduced and it’s time to demonstrate character through action.  Damon’s character is appealing, he meshes pretty well with the Chinese cast and, thankfully, there is no “older white guy getting it on with Asian ingénue” action between him and female lead Jing Tian. 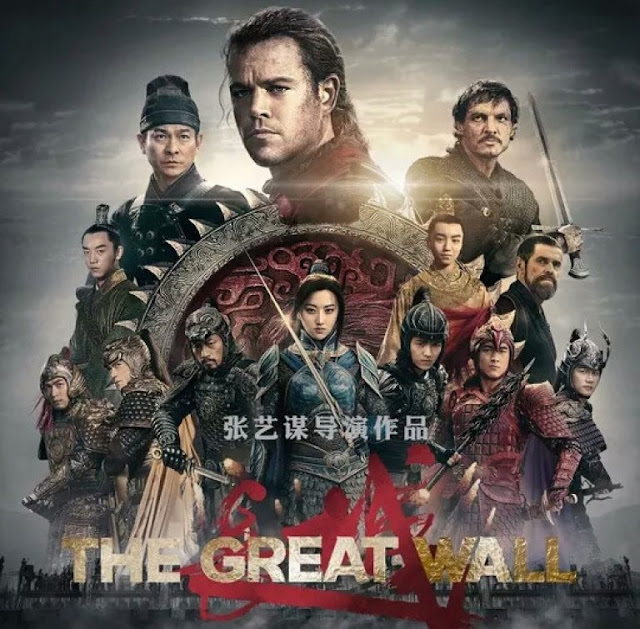 I suspect, however, that nobody getting it on with Jing Tian-- i.e. Matt Damon diverting the narrative from thumping-hearts kids-in-peril romantic exploration and emotional fulfillment for Jing and the other main characters--might have been part of the problem in the Chinese market.

My main difficulty with the film is the “third act” the “resolution” which I now call, in homage to the New Yorker’s David Denby (who first coined the phrase in describing the ending of the Edward Norton Hulk movie), “the CGI pukefest”.

Bowing to Hollywood’s need to up the stakes for the finale, The Great Wall leaves “The Great Wall” and shifts the action to Beijing.

The film’s most amusing, Chinese-y sequence occurs there, when the emperor is introduced to a captured lizard-monster by the usual crowd of sycophantic advisors.  But otherwise, the vibe is “we’ve just spent 80 minutes at the Great Wall and got to know it and like it now why do we have to move to Beijing??”  Well because, spoiler here, the lizards simply spent the entire second act tunneling through the Great Wall while mounting diversionary attacks, so all the cool heroic sacrifice stuff at the wall was useless bullsh*t.

So the gigantic lizard army is done in and the world saved by Matt Damon improvising doofus greenscreen crap at some rando location at the end.  But it would have been just as big a drag if some Chinese actor had done it.  The heroes and heroines of the borderlands should have been given the honor of ending the movie at the Great Wall with their mad skillz, courage, sacrifice, and devotion.

One last note: a fumbled grace note in the movie was the name given to the monsters: Tao Tei.

In Chinese, the name is spoken taotie, a kinda cool reference to the ubiquitous taotie monster masks incised on the most ancient of Chinese bronzes. 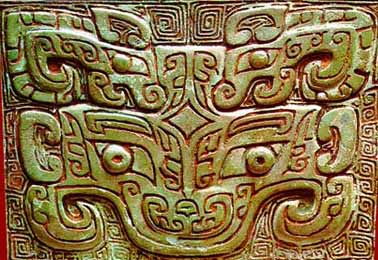 Nobody knows the origin of this iconography, so the movie is pretending it was a depiction of the real, fearsome lizard monsters that had ravaged northern China for millennia  (you can see the taotie insignia on the forehead of the beast displayed to the emperor; it’s also glimpsed in this still, though not too clearly). 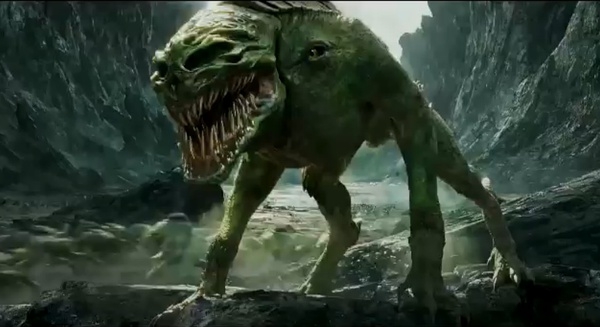 I guess tao tie was deemed too awkward for non-Chinese tongues, so it got simplified to tao tei.  Well anyway.  Almost pulled it off! Metaphor for the movie!

Maybe next time Zhang Yimou will insist on more creative control over the script and get a chance to achieve some emotional resonance in his supernatural wuxia story, the way Ang Lee did in Crouching Tiger Hidden Dragon.

Until then, a decent effort, and it certainly was striking to see a Chinese movie with the signature Hollywood credits that go on for 15 minutes of literally hundreds of people doing weird digital mega giga computer stuff that you can’t even figure out what it is.

The movie’s good enough to keep Wanda in the blockbuster business, and I expect they’ll find the right formula in some subsequent outing.