The March 13 LA Times article by Edmund Sanders, Darfur’s rebels pose latest threat to the displaced, isn’t going to give a lot of comfort to the Save Darfur forces.

By describing a state of affairs in which it is the Darfurese militias, and not the Khartoum-backed janjaweed, that are terrorizing the immense Gereida refugee camp, antagonizing the AU peacekeepers, and forcing the withdrawal of foreign aid workers, the Times is stripping away the robe of noble victimhood that enfolds Darfur.

In doing so, it also implies that, even if the Bush administration discovers a new kind of diplomacy beyond blundering, braindead opportunism; the Chinese acquire some moral backbone; the Sudanese government ceases its depredations against the Darfurese; and Bashir is packed off to The Hague for crimes against humanity, Darfur is still going to be a pretty screwed up and miserable place.

But what brought my grim reflections on Darfur’s future to a sudden halt was these grafs:

Many accuse the Arab-dominated Sudanese government of encouraging the rebel split by pursuing a divide and rule strategy, bribing some of the groups while bombing others.

In May, the government signed a peace agreement with one SLA faction led by rebel leader Minni Minnawi, who received a plum government job in exchange. Other rebel commanders rejected the deal, leading to further splits, power struggles and aggressive behavior.

(Insert sound of phonograph stylus voomping to a halt)

Fortunately, my obscure China blog is available to rebut this absurd piece of spin and remind its gentle readers that it was not the Sudan regime that foisted the peace agreement—and Minni Minnawi—upon the long-suffering people of Darfur.

Here is the incriminating photo of Minnawi meeting with the cynical, thoughtless ass who thought bribing and promoting this divisive and incapable gangster could advance his plans for Darfur: 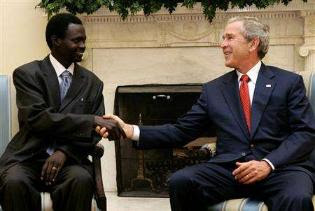 Courtesy of China Matters and through the magic of cut and paste, the backstory from September 2006:

In June of this year, Robert Zoellick of the U.S. State Department and Hilary Benn of the U.K. inserted themselves in African Union negotiations for two days and tried to solve Darfur with an agreement that can be described charitably as half-assed.

It was signed with only one of the rebel groups, Minni Minawi’s Sudanese Liberation Army, which took its (presumably generous) payday and disintegrated in a vortex of banditry; it made no provisions for restraining or disarming the Janjaweed; and indeed made virtually no demands on Khartoum while leaving the burden for security on the hapless AU force.

A negotiator for one of the rebel groups provides some insight into the Darfur Peace Agreement:

The US engineered peace for Darfur, commonly known as Darfur Peace Agreement (DPA) is both “fake and unsustainable”. Its prime engineer Mr Robert Zoelick and his arch Experts produced a document that turns out to be a mockery of international diplomacy. As Professor Reeves said, the DPA was borne dead right from day one. In addition to the government of Sudan, the only other signatory of the DPA was Minni Minnawi and his SLM fraction, erroneously and persistently promoted to be the biggest Darfur “rebel” group. Subsequent attempts to create a force out of Minnawi by the international community, the AU and the Government of Sudan came to naught. The US too was involved in this fiasco, culminating in Minnawi’s visit to the White House. The visit was by means ill-advised.


That the DPA is dead if not borne so is beyond doubt. Mr. Pronk, the UN Special Representative to Darfur described it as “severely paralysed, does not resonate with Darfur people and requires major rewriting”. Lashing Minnawi to sign the agreement, Mr Zoelick warned him: “I could be a very good friend but could also be a nasty enemy”. Well Mr, Minnawi chose “a very good friend”. Mr President, I trust you concur with us that any agreement that is an outcome of bullying cannot guarantee “lasting and sustainable peace”.

Mr. Minnawi has so far failed to sell the DPA to Darfur people.

Both of his public rallies in Alfashir and Khartoum had to be cancelled. But he is not the only one who failed to recommend the DPA in a public venue to Darfur People. Mr. Egeland, the Head of UN Humanitarian Operations had a tragic experience. His attempt to recommend the DPA to Darfur IDPs [internally displaced persons—ed.] ended up with his interpreter lynched in front of him. If the IDPs do not think that the DPA is good for them, who else does?


For “lynched” read “beaten and hacked to death”.


As reported above, President Bush even took the extraordinary step of meeting with Minni Minawi in July 2006, and made what sounds like a futile and humiliating attempt to cajole him into behaving like a genuine American client.


Bush told the rebel leader that his forces must refrain from violence and pressed him to forge an alliance with other factions in Darfur to broaden support for a peace agreement, [NSC spokesperson] Jones said.…Jones had no comment on how Minnawi responded.


When a policy’s success relies on inviting a powerless, semi-retired, and risk-adverse bandit to the White House for a dispirited jawboning session, you can say that policy is in trouble.


From the same article:


Minnawi faces rising opposition to his leadership among commanders in northern Darfur, including those from his Zaghawa tribe, according to the United Nations.


"He signed under incredible U.S. pressure and was probably given a lot of promises by the U.S. and the U.K.," said Jemera Rone, a Sudan specialist with the advocacy group Human Rights Watch. "I'm sure he feels that the U.S. government now owes him and the people of Darfur quite a lot."


A report issued earlier this month by the U.N. mission in Sudan cited allegations by displaced Sudanese that Minnawi's faction "was indiscriminately killing, raping women and abducting" civilians.


"That agreement is not working, and one of the many reasons is Minni Minnawi," Kenneth H. Bacon, president of the advocacy group Refugees International, wrote last week in a letter to Bush.


Refugees International said yesterday that Minnawi's forces have conducted a "reign of terror" in North Darfur by beating and raping women, killing young men and displacing thousands of people. Bacon asked Bush to "please stress" to Minnawi that the rebel leader "must honor the terms of the Darfur Peace Agreement and stop fighting."

It took the LA Times seventh months to catch up, and they still screwed up the story.