Hamid Karzai, Najibullah’s Ghost, and the Gold of Bactria 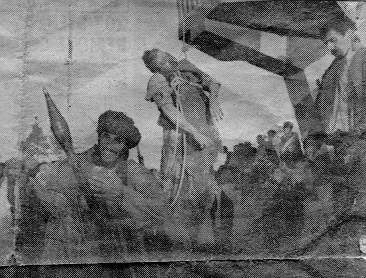 Do not be naïve about what you are facing. They will bring a destruction you cannot imagine.

In the opinion of America’s counterinsurgency boffins, there are no bad doctrines—only bad clients.

Unsurprisingly, the Obama administration’s response to the rather dire situation in Afghanistan is to blame ineffectual and corrupt governance, rather than NATO’s hitherto halfassed and under-manned campaign against the ferocious Taliban.

The United States’ desire to give Hamid Karzai the boot has been unambiguously conveyed and much will no doubt be made of the electoral shenanigans Karzai apparently committed in the recent presidential elections.

Whether the United States really believes that its favored candidate, Abdullah Abdullah, a Tajik, will emerge as savior of the NATO enterprise, or Karzai is simply being eased out so Gulbuddin Hekmatyar or someone like him can be lured out of the insurgency and into the central government as the indispensable Pashtun strongman remains to be seen.

In any case, I don’t share the easy contempt and condescension so many observers express for Hamid Karzai, the “mayor of Kabul”.

Karzai’s father, a leading Pashtun political figure, was murdered by Taliban assassins when he started to organize opposition to Taliban rule. After 9/11, Karzai recklessly entered Afghanistan with a handful of followers; instead of being welcomed with flowers, collecting a swelling train of followers, and leading a triumphal procession into Kabul a la Napoleon's 100 days, he became the target of a Taliban manhunt and barely and ignominiously escaped back into Pakistan.

On his second trip in, Karzai was under direct U.S. sponsorship. In a moment of what he probably considers bizarre symbolism, Karzai narrowly escaped death from a misdirected American airstrike while talking face to face with his CIA liaison.

As president, Karzai’s continual efforts to slip the U.S. leash, build alliances with warlords and tribes outside the core of the Taliban, and ignore the diktats of the ever-infallible Zalmay Khalilzad—the Afghan-borne supremo of America's Central Asian foreign policy who midwifed the creation of compromised, unpopular bourgeois pro-U.S. regimes from Baghdad to Islamabad and reportedly covets the presidency of Afghanistan for himself—seemed to reflect an understanding that a regime that relied on U.S. backing rather than local power had no future.

As he stands revealed as a superfluous great power client and embodiment of unpalatable on-the-ground realities, Karzai probably also remembers the fate of Muhammad Najibullah, who was the last president of the Soviet-backed Republic of Afghanistan.

When the Taliban entered Kabul in 1996, they dragged Najibullah from UNICEF compound where he had taken refuge three years before when a deal to extract him from Kabul collapsed, tortured him for hours with the special ingenuity that Afghani warlords apparently can always bring to bear on such situations, and hung his castrated corpse from a lamppost.

The secularist Najibullah was probably responsible for saving the “Bactrian Hoard”-- a collection of 20,000 gold artifacts from Afghanistan's pre-Islamic past that dated to before the Common Era and symbolized the country's traditional role as the crossroads of Central Asia--from looters and the Taliban.

The trove was discovered by Soviet archaeologists in six burial mounds of Bactrian nomads in northern Afghanistan.

When the Taliban approached and Afghanistan fell into chaos, Najibullah apparently arranged for the treasures to be removed from the Kabul Museum and hidden in the vaults of the National Bank of Afghanistan. Hamid Karzai eventually assisted in effecting their rediscovery. 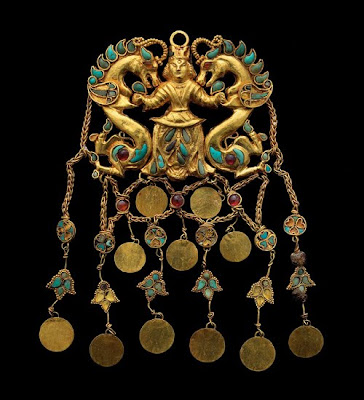 The doors of the vault were locked with seven keys which were distributed to trusted individuals who were based abroad. The vault, which could only be opened if all the keys were available, provided security to the Bactrian Hoard, protecting it on numerous occasions from attempts by the Taliban to steal it. During the invasion of Afghanistan by American forces, the Taliban, who were unaware that all seven keys were needed in order to open the vault, made one last attempt to get their hands on the treasure by planting bombs on the vault door. Before they could detonate the bombs, American troops arrived at the central bank and the militants were forced to flee…

In 2003, after the Taliban was successfully defeated, the new government wanted to open the vault, but the keyholders (called "tawadars") could not be summoned because their names were purposefully unknown. Hamid Karzai had to issue a decree authorizing the attorney general to go ahead with safecracking. But in time, the seven key-holders were successfully assembled and the vault opened.

An exhibition of the Bactrian artifacts is currently touring the United States. It will finish up at the Metropolitan Museum of Art in New York on September 20, 2009.

National Geographic’s website has further information and a photo gallery of some of the artifacts.

As Karzai is surrounded by his American advisers and Afghan enemies, I expect he also reflects on the fate of Afghanistan’s previous secular ruler, the pervasive violence, destruction, and intolerance that seem impossible to escape, worries about the non-stop battering that his nation and the Afghan people and society are enduring, and wonders what kind of legacy he might leave his country.

Image of Bactrian artifact from website of Embassy of Afghanistan, Washington
Posted by China Hand at 10:49 AM 13 comments: