Democratic Pakistan Stares Into the Abyss 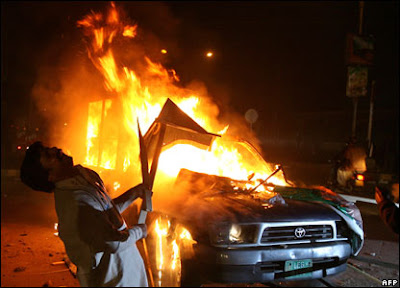 Beyond the immediate tragedy of Benazir Bhutto’s death by violence in Rawalpindi, the greater tragedy for Pakistan is that the opportunity for a peaceful transfer of power—one that did not involve assassination, judicial murder, or legal vendetta—has been lost.

What was going to happen after January 8 parliamentary elections was probably not going to be fair, democratic, or ungrudging, but the consensual shoehorning of some combination of Bhutto and elements of Sharif’s PML-N into Pakistan’s governing arrangement seemed imminent.

Now these hopes have been dashed, brutally and seemingly totally.

And at a stroke, the assassination has revealed how rickety the U.S. brokered deal to elevate her into the prime ministership was, and, more importantly, displayed frailties and fissures at the heart of Pakistan’s political institutions and civil society.

Bhutto’s PPP was a one-woman show and her violent removal from Pakistan’s political scene was a contingency that the United States apparently failed to plan for. Bhutto left no obvious successor.

Now her supporters, with their expectations and anger, have been cut adrift.

Intense violence was reported from all parts of Sindh, especially Karachi and Larkana, Ms Bhutto’s hometown.

Fear and chaos ruled Karachi after news spread about Ms Bhutto’s death. The ensuing violence in the Sindh metropolis claimed at least five lives while more than 150 vehicles, some petrol pumps and a hospital were set ablaze.

The city descended into anarchy as armed mobs came out in the streets, to be joined later by gangsters, holding up panicked people stuck in traffic jams on major roads.

The traffic came to a standstill after hundreds of thousands of people, anticipating violence, fled their offices and sought to reach their homes. Law-enforcers were nowhere to be seen.

As fearful citizens made calls to inquire about the safety of their friends and family and learn about the traffic situation, the telecommunications networks jammed because of overloading.

This sparked off rumours, further fuelling panic and the sense of insecurity.

Bereft of their leader, the commitment of the foot soldiers of the PPP to Pakistani democracy is now open to question. Beneath the anguished rioting is also a disturbing undercurrent of Sindh separatism (the province of Sindh was Bhutto’s homeland and her political stronghold).

The fatal deficiencies of ability and/or will displayed by Musharraf’s military-backed government in protecting the democratic parties, their leaders, and the process itself are now a matter of dismayed speculation.

And beneath it all is the horrified realization that Pakistan’s fragile democratic processes are nakedly vulnerable to attack not only by extremist Islamist forces.

That weakness is not only fueling Islamist extremism. It’s also fueling radicalism and separatism. And disillusionment with democracy.

That, I think, accounts for the deep dismay, indeed fear, expressed in the English-language Pakistani media even by people who were no fans of Benazir Bhutto.

I, like most Pakistanis, am still too numb with shock and grief to think coherently about what has happened or what the implications of this are for teh country and for the world. But this I know, whether you agreed with her political positions or not you cannot but be in shock. Even as I type these lines I am literally shaking.

Aftab Khan Sherpao, who broke with Bhutto to set up his own political faction, was quoted by Dawn as follows:

Asked if elections would be possible in such circumstances, the former two-time chief minister of the NWFP said, “I don’t think so. This (Ms Bhutto’s death) will lead to more violence and beneficiaries of destabilisation would join in.”

Pakistan was expecting that an unconstitutional backroom deal brokered by the United States with the acquiescence of a politically crippled president would somehow survive its way through the sausage grinder of opposition by the secular judiciary, the intelligence services, and Islamist forces, wind its way through an opaque, rigged parliamentary process, survive whatever street demonstrations got thrown at it, and emerge as a new, viable Pakistani polity.

Maybe that was hoping for too much. Maybe Pakistan’s democrats realize that now.

But its democratic aspirations may not be so lucky.

People have been eager to point the finger at Musharraf and/or the intelligence services for conniving in Bhutto’s assassination.

I’m more inclined toward General Zinni’s take, which is that extremist Islamist elements wanted to put paid both to an American client and to Pakistani secular democracy, and create a crisis which would boost the strategic fortunes of groups like al Qaeda.

For Musharraf personally, the assassination looks like a disaster. At best he looks like a mug, at worst a murderer, in any case a like a lousy president in a country grappling with a national crisis.

Nawaz Sharif, now Pakistan’s leading opposition politician, has already called on Musharraf to resign and that could easily turn into the price that Pakistan’s military is willing to pay to ratchet down the domestic crisis.

It’s impossible to divine what calculations go on in the black heart of Pakistan’s intelligence services, and they are doubtless not shedding any tears over the death of Bhutto. But their future actions may provide some clues as to their complicity—and their commitment to Pakistan’s civil society and willingness to engage with and accommodate democratic forces.

In the coming days, an important indicator will be whether the intelligence services and the army decide to take seriously this affront to their pretensions as stewards of Pakistan’s security.

Also, if they do decide to do more than incarcerate some symbolic offenders in an attempt to appease domestic and international opinion, it will be interesting to see whether Pakistan’s soldiers and spooks can exploit their close relationship with Islamist groups to punish the offenders against Pakistan’s law, order, and society, and at the same time thread the needle between law enforcement, suppression, and oppression more successfully than the United States has done in that part of the world.

As for Nawaz Sharif, with his main rival, Benazir Bhutto, out of the way, it remains to be seen if he can successfully negotiate the now-empty tightrope of Pakistan’s opposition politics to political—and personal—survival.

He’d better not stare down at the abyss beneath his feet.

It seems the US money has been used by the ISI to rig the elections.

ISI was directly involved in rigging the coming parliamentary elections – and was using American money to do it. The United States has given Pakistan at least $10 billion in military aid since President Musharraf agreed to back the War on Terror after the September 11 attacks.

Thank you for sharing your information with me. I find your blog very interesting. I learned a great deal from it. I also have a blog title How to play Play CSGO like a pro. Professional players pay close attention to the radar more than ordinary players. Minimaps and sounds are important CSGO game mechanics.