Does the Obama Administration Have Any Clue About North Korea? 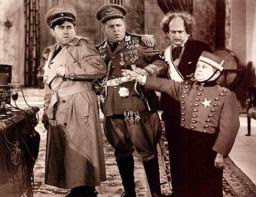 The Bush administration refuses to deal with Kim Jung Il 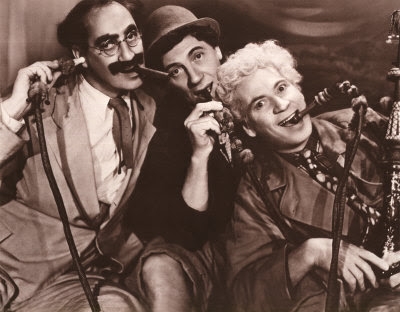 
Ah, for the good old days of the Bush administration.

So simple, so easy to predict and analyze.

One always knew that it would make the stupidest, most violent, and most vehement response to any policy irritant.

Like Curly of the Three Stooges banging himself on the head with a two-by-four to rout a pesky fly.

I am willing to give the Obama foreign policy team more credit.

But maybe we’ve only upgraded from the Three Stooges to the Marx Brothers.

I find the willful bewilderment of the U.S. foreign policy apparatus on the issue of North Korea’s recent nuclear and missile tests utterly baffling.

The explanation, to me at least, is rather simple.

North Korea is facing hostility from the right wing government in South Korea. It is dealing with calculated indifference from China, which is more interested in links with Seoul than Pyongyang.

North Korea is begging for one of those (I’m sorry, but it has to be said) “Nixon goes to China” moments from the Obama administration, so it can improve its economic and geopolitical 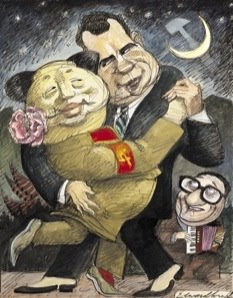 position (and secure the survival of the current set of characters running things in Pyongyang) without worrying about the US taking advantage of the regime destabilization opportunities that will be created by any attempt to open up an profoundly impoverished society sandwiched between three very prosperous states: China, South Korea, and Japan.

Kim Jung Il wants to shuffle the geopolitical deck in North Asia by closing the books on the Six Party talks (mediated by China and a necessary evil when Pyongyang faced the concentrated hostility of the Bush administration) and negotiating directly with the United States.

Banging off nuclear tests and firing missiles don’t look like the best way to attract Washington’s attention, but Kim Jung Il is doing the best with the meager hand he’s got.

When the tired old tropes about insane dictators are trotted out, I hope someone realizes that it’s a matter of survival for small states disliked by the U.S. to be careful, rational, and calculating; it’s only superpowers like the United States that can afford occasional spasms of insanity like the Bush administration’s plan to democratize the Middle East through invasion.

Kim has a plan and he’s currently considering what kind of provocation will force the United States to deal with him, without endangering the survival of his regime.

Therefore, earnest calls on China from the United States to handle the unpleasant, grinding chore of restraining and cleaning up after the North Korean pit bull are unlikely to yield positive results because

a) the North Koreans are trying to break away from Chinese influence and will fight U.S. efforts to force them back into the framework of the Six Party talks;

b) as long as North Korea is politically and diplomatically isolated from the rest of the world and hopelessly dependent on Chinese assistance and diplomatic good offices, it’s in China’s interest simply to let the matter fester without a resolution of the nuclear and missile issues that worry Japan and the western powers.

The analogy isn’t perfect, but we’re basically telling the wife who’s screaming out the window that she’s getting battered by her spouse to go back and work things out with her husband.

The way the current policy is evolving, it will simply increase China’s leverage on North Korea without achieving significant improvements in the regime’s behavior.

One would like to think this point is clear to the Obama administration.

Maybe they’ve got the whole situation scoped out, have decided that the North Korean problem will be solved in Obama’s second term (i.e. never) and have consciously made the call to let Kim stew in his dysfunctional relationship with the Chinese.

But in either case, for the sake of the long-suffering North Korean people, I hope the Obama administration has more in mind than malign neglect.


Nixon-Mao image from The New Yorker
Posted by China Hand at 1:52 PM

anime cosplay follows Comic-Figures or and also your ideas and desires for cheap cosplay.Our cosplay costumes are not made in the same measurement, but are made with our cosplay special attention to your request.naruto cosplay or cosplay naruto is hot sale now. Furthermore, we will still send you the product Japanese School Uniform after our detailed further check.Yyou'll be surprised at the plentiful varieties such as Kingdom Hearts Cosplay, Bleach Cosplay, Final Fantasy Cosplayand you are sure to find the special anime cosplay costumes you've been looking for wholesale costume in our store.

Turn around cellular phone lookup internet pages similar to this single resolve give you each kinds of cell phone search details so so when to you can sooner or later unearth away beginning home their name, address, where they be there, reverse phone lookup their current age as well as much other. So once you call for with the purpose of exhaust a cell phone number search now, merely perform convinced to facilitate pay out this accommodating tool so what time to stumble on away every kinds of quash mobile phone lookup information trailing to facilitate part at present.