Brad Bird Has Your Squid!

Watchmen, created by Alan Moore and David Gibbons and issued in twelve installments in 1986-87, is acknowledged to be one of the apex achievements of the graphic novel. An intoxicating combination of detective noir, science fiction, alternate history, and political critique, it was selected in 2005 by Time Magazine as “One of the hundred best English-language novels” (from 1923 -- when Luce-time began—to “the present”).

The property finally received its big-screen/mega-budget due in 2008, courtesy of director and uberfan Zack Snyder, after decades in development hell (and Moore’s refusal to participate in or endorse any filmed version or even accept an on-screen credit). The movie achieved $180 million in box office and awaits its entry into the Valhalla of celluloid profitability upon the release of the 186-minute Blu-Ray/DVD director’s cut on July 21. 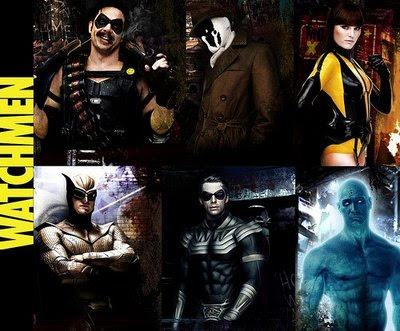 In one of the book’s sliest moves, the only character with genuine superpowers—the accidentally irradiated time-and-space-shifting immortal blue giant Dr. Manhattan—becomes increasingly alienated both from humanity...and his government-issued costume.

First Dr. Manhattan sheds his headgear, then his trim black uniform—he wins the Vietnam War while swanking around in a Speedo-esque pair of skintight shorts—and finally, in a move that caused the faithful Zack Snyder a certain amount of R-rated heartburn—abandons clothing and modesty altogether for the rest of the book.

Aside from the fate of the universe, Doc Manhattan’s main preoccupation is his love life, a perpetual cycle of abandonment of inexorably aging girlfriends for new, nubile partners to his eternal and eternally on-display full-frontal azure perfection.

On the other hand, the all-too-mortal Nite Owl, his insecurities writhing beneath the ineffectual shield of a middle-aged pot-belly, discovers to his embarrassment that he can only overcome his sexual dysfunction while wearing his borderline-absurd bird costume.

The Snyder movie version eschews this kind of subtlety for a straight reading of the story from the point of view of the book’s narrator, Rorschach, a virtuous psychopath dealing out street justice from beneath a mask made from a swirling swatch of textile that had belonged to the martyred Kitty Genovese (!).

Snyder’s amped-up Mickey-Spillane-goes-to-Toontown approach contains enough violence and sadism (further elevated in the Director’s Cut) to gratify the all-important and hypercritical fanboy base.

However, discriminating viewers may decide that the definitive Watchmen movie, one that captures the subversive essence of the book, was already made in 2004: Brad Bird’s Oscar-winning animated feature The Incredibles.

Perhaps because of a dread Pixar/Disney code of omerta, the only detailed examination of The Incredibles’ debt to Watchmen that I could find in mainstream media outlets was one article by the Baltimore Sun’s movie critic, Michael Sragow.

However, the parallels have been noted and discussed on message boards for years, and acknowledged, albeit very briefly and gingerly, by Watchmen’s co-creator and artist, David Gibbons.

· Forcible retirement of superheroes by government edict
· A mysterious campaign of extermination against said superheroes
· A plot to wreak an enormous calamity under false pretenses when the superheroes are out of the way
· A lot of asides about moonlighting superheroes, the dangers of capes, etc.
· The squid

I read Watchmen blithely oblivious to the plot similarities between Moore’s remorselessly dark and adult superhero fantasy and Bird’s hit movie (which, in the company of a junior family member, I have watched a gazillion times but also commend to adults as one of the finest pieces of mass entertainment unleashed by Hollywood in the last twenty years), until one image in Chapter 12 of the book triggered a Proustian flood of associations.

Chapter 12, the finale of Watchmen is, quite frankly, a train wreck.

Constrained by a pre-determined 12-issue format, Moore and Gibbons abandon the highly effective and mysterious noir atmospherics of the previous chapters for a blizzard of exposition, advanced by the villain blabbering unchecked at his superhero captives--a fatal breach of the fourth wall infamously mocked in The Incredibles as the dreaded “monologuing”.

The action is capped by a deus ex machina or, more accurately, the corpse of a genetically-engineered mind-melting supersquid barfed into New York at the villain’s behest in order to persuade humanity—for plot purposes that don’t withstand very close examination--of the imminent threat of invasion from an alien dimension. 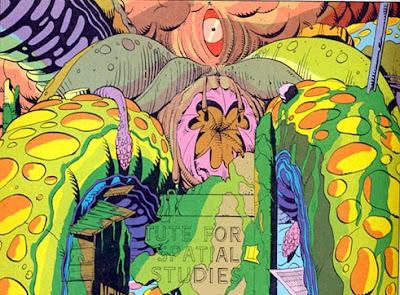 This bizarrely unsatisfying out-of-left-field apparition was abandoned decisively and early on in Watchmen’s twenty-year hegira through the Hollywood development process and replaced with a plain-vanilla last-act hazard that made less onerous demands on the audience’s credulity: a simultaneous nuclear attack on the world’s capitals.

Only the most ardent fans mourned the banishment of the squid from the silver screen.

Only the fans…and Brad Bird.

When I viewed the deceased supersquid’s despondent tenticular mass in Chapter 12 of Watchmen, I had my epiphany: involuntarily, I recalled the strikingly similar attitude of the overthrown Omnidroid at the conclusion of The Incredibles.

Brad Bird had figured out a way to integrate the problematic squid into the film when the rest of Hollywood had given up on the challenge.

The Squid Stays in the Picture!

With the release of the Watchmen film on home video, viewers have the opportunity to discover and dissect the parallels between three remarkably complementary and rewarding works—the triptych of the original novel, Zack Snyder’s film, and The Incredibles--at their leisure…


(If you don't see the links below to Amazon for the various works cited in this post, click the Refresh button)

The Squid stays in the Picture...Brilliant!

that's so cool!
This is an informative blog
taiwan
網頁設計

The Squid stays in the Picture...Brilliant!Jadwal pertandingan liga inggris

This is an amazing blog for future warts.brad pitt fight club coat

I bought a Mask from www.morphonite.com which is really great. I just love it.

It is great fun and experience in shop www.morphonite.com because they have lot of good quality product and many types.