The Maldives are perhaps not the best Global Warming Poster Child

The textbook image of the threat from global warming and rising sea levels is the precarious city/island of Male, capital of the Maldives island nation in the Indian Ocean. 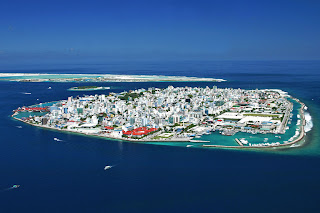 Despite the dazzling images of its tourist resorts, the Maldives is not an unspoiled Eden with underwater cabinet meetings.

As a  fascinating photoessay by Francesco Zizola on the Maldives revealed to me, the Malidives is in many ways an artificial human construct.  The capital city, Male, is one of the most densely populated cities in the world.

In a quest for lebensraum, the island was expanded by filling in the surrounding sea floor to the encircling coral atoll and beyond.  A 3.5 meter high, six kilometer sea wall was constructed with Japanese aid to protect the island (mostly 1 meter above sea level).  Another atoll a few miles away, Hulhumale, was filled in to a height of 2 meters above sea level to serve as a new home if Male becomes unviable.

The least edifying piece of geoengineering in the Maldives is Thilafushi Island.  Zizola writes:

Thilafushi island, also known as a rubbish island, was originally a vast lagoon. It was reclaimed in 1992 using waste as the filling material to solve Male's unmanageable refuse problem. Few Bengali immigrants work at the waste disposal centre in Thilafushi. Their job basically consists of indicating to the numerous dump trucks where to unload the waste. They then incinerate part of the waste or bury the majority of it in landfill sites. No recycling is carried out and hazardous wastes are not sorted from common rubbish. 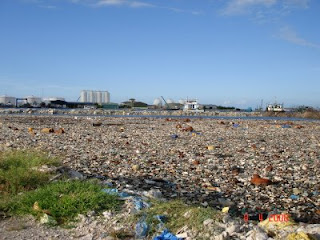 Maldives Live reports that 330 tons of rubbish make it to Thilafushi each day, some generated by the thousands of tourists visiting the Maldives, the rest coming from Male.

There are many good reasons for a concerted global effort to mitigate global warming.  However, enabling the Maldives to continue its high population density/atoll-filling/trash-dumping/tourism-based lifestyle one meter above sea level is perhaps not one of them.
Posted by China Hand at 9:36 PM

I can only express a word of thanks. Because with the content on this blog I can add knowledge I, thank has been sharing this information. Do not forget to visit our website to share information and knowledge about health.|
cara menghilangkan Payudara gatal |
obat luka basah herbal |
Cara Mengobati sinus |

All my life just wants to be with you at all times. Throughout my life, I begged you to leave me