In the Valley of the Clueless

I have an article up at Asia Times, US Internet Declaration Bugs China, about Secretary Clinton’s “freedom to connect” speech and its implications for China.

In this context, it is interesting to recall how middle class priorities can get repackaged as legal rights and essential human freedoms.

Back in 1996, when dinosaurs roamed the earth, AOL rolled out its $19.95 per month “all you can eat” dial-up service. It was quickly overwhelmed by users who dialed up and never hung up, tying up AOL’s modems and exposing other AOL customers to the dreaded busy signal for hours on end. For newbs out there, I feel compelled to point out that in 1996 there was no broadband; virtually all connectivity relied on copper phone lines, and connections were made at 56Kbaud by “modems”—analog chirp machine on the user's and AOL's end of the line.

America felt the agony of AOL’s 8 million subscribers (less than 4% of the population, skewed toward the better-off computer owners, for those keeping score), and lawsuits were filed in New York, Wisconsin, and other states, not only by customers but by state attorney generals, bringing the wrath down on AOL (then yclept “Always Off Line”; now “Arianna’s Overpriced Lemon”).

I wonder if state AGs were equally swift in filing lawsuits on behalf of poor neighborhoods that couldn’t get a patrol car on site an hour after a 911 call. For that matter, I wonder how quickly “freedom to connect” will translate into the provision of universal broadband to America’s poorest neighborhoods today.

Anyway, “freedom to connect” is now a universal right to be extended to Chinese citizens through the efforts of the United States.

Funding of Internet circumvention technology has turned into a political football. The Republicans apparently feel Psiphon and Tor (proxy networks that allow Chinese users to surf blocked sites and access forbidden keyword searches) are key to knocking down the evil empire(s), and they blame the State Department for excess timidity in funding and deploying the servers that enable them.

In this context, I was interested to learn that the U.S. Internet censorship circumvention portfolio is in the reliable hands of the spiritual sect i.e. religious cult Falun Gong, which received $1.5 million dollars from the State Department last year to fund its open Internet initiatives.

I draw on Evgeny Mozorov’s The Net Delusion to argue that the U.S. strategy is essentially flawed: it is too heavily skewed toward censorship circumvention and doesn’t pay enough attention to a major focus of authoritarian regimes in their sophisticated Internet strategies: using the Internet for surveillance, and flooding it with pro-government propaganda.

[I put a buy button for The Net Delusion at the end of the post.  The best deal is to load the free Kindle application onto your PC and buy the e-book for $9.99, instead of spending $18.45 and cluttering up your bookshelf with the hardcover of a book that, though excellent, is already teetering on the brink of events-driven obsolescence.]

Mozorov also argues that the Internet is perfectly equipped to implement a key authoritarian countermeasure—distraction through mass media.

He tells us that the seductive, corrosive effects of Western culture on the communist ethic (what Chinese communists call the West’s “sugar coated bullets”) may be overrated.

Mozorov cites the interesting case of East Germany. Under communism, most of the GDR was exposed to an incessant barrage of Dallas and Dynasty and other subversive US programming via West German TV. However, there was one part of East Germany, out by the Polish border, that was out of range of the broadcasts. It was mockingly called “Tal der Ahnunglosen”: the Valley of the Clueless.

...those East German youth who could receive Western television were, overall, more satisfied and content with the regime; the ones who could not...-those in the Valley of the Clueless—were much more politicized, more critical of the regime, and, interestingly, more likely to apply for exit visas...Western television made life in the East more bearable...it was in the Valley of the Clueless that dissent began brewing; its residents were clearly more dissatisfied with life in the country than those who found a refuge in the exciting world of The Denver Clan [as Dynasty was known in Germany].

Apparently the Russian government has studied the lessons of East Germany and is big on supporting the rollout of Internet sites that offer largely apolitical entertainment for young people to keep their minds off Color Revolution-style hijinks.

The Kremlin’s youth wing is heavily involved in a well-financed media site russia.ru. According to Mozorov, it has some light political content, but its signature video offerings are gun/military/video game/movie/car guyfotainment and something called “The Tits Show” a.k.a. Сиськи Шоу.

Сиськи Шоу is an interesting window on that mysterious commodity, the Russian soul. It follows fitness-challenged host, Dennis Ch., on an alcohol-soaked stumble through Moscow’s skank-rich nightclubs in search of girls who will show him their Сиськи. It plays more like a Dostoevskian howl into the existential void of sweaty desperation, self-loathing, and exhaustion than sexy romp.

On the “freedom to connect” issue, beyond the hypocrisy of the US government on the issue (see Wikileaks) and the overall trend toward Internet monitoring and control by democratic as well as authoritarian regimes, I’m not a big fan of the U.S. habit of clothing its foreign policy priorities in the dazzling raiment of universal values, core principles, and global norms.

The Chinese have been trying without success to switch the terms of US-China debate away from unilaterally declared “universal core principles” to potentially conflicting but practically sustainable “national core interests” (a framing that allows for compromise in consideration of Chinese priorities).

However, US rollout of “freedom to connect” reinforces the “US arbiter of orthodoxy vs. Chinese pariah” narrative that makes negotiation unnecessarily difficult (unless you feel that “freedom to connect” is a magic bullet for regime change that renders engagement irrelevant, which Mozorov argues is unrealistic).

One topic I didn’t go into in the Asia Times article was the slippery slope from “freedom to connect” to US government funding of Internet circumvention technology to cyberwar.

On a range of cyberissues from employing Stuxnet to sabotage the Iranian centrifuge array at Natanz to using Falun Gong to pierce the Great Firewall, the U.S. attitude seems to be Fair Game: it’s “good guys vs. bad guys”, “freedom vs. oppression”, “core principles trumping core interests” and a studied obliviousness to the issues of sovereignty, international law, national interest, and blowback.

I don’t think it’s prudent to in effect establish unrestricted cyberwar against China’s Internet infrastructure as an American right, instead of trying to establish some mutually-agreed ground rules.

Laura Rozen linked to an interesting article at Financial Times by Roula Khalaf and James Blitz , The Sabotaging of Iran, that addresses the same concern in the context of the Western campaign against the Iranian nuclear program.

It’s a good article, though it includes some rather asinine speculation that the Iranian govenment might have murdered its own top nuclear scientists (using bombs delivered by motorcycle riders!) in order to remove security threats. I’m assuming this charade is meant to innoculate the Financial Times from the dangerous charge of humanizing the Iranian bogeyman.

Indeed, when you read about scientists being blow up in their cars next to their wives, or a country’s infrastructure being subjected to an undeclared, extralegal sabotage, one might feel a twinge of sympathy. 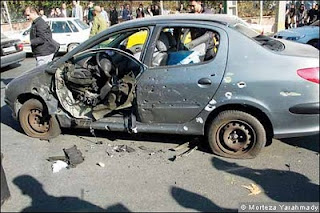 I would think there is a good possibility that Iran is allowing Chinese scientists to participate in the Stuxnet forensics, which means that China is familiarizing itself with the characteristics and capabilities of this kind of weapon for offensive as well as defensive purposes.

For some experts, moreover, the sabotage campaign comes at a cost. Stuxnet may have concentrated its efforts on Natanz but it has also proved expensive for many industrial companies. And should Iran choose to respond, it could prove just the beginning of a dangerous cyberwar, to which neither the US nor Israel are immune. US civilian and military officials have noted that America’s key infrastructure – such as power and water plants – is frighteningly vulnerable to cyberattack. “It’s a dangerous technology,” says Frantz, the expert on the CIA’s sabotage efforts, referring to Stuxnet. “Releasing it does two things: it spreads the danger but it also opens the door for retaliation. And I think that cyberwarfare is the next big front.”


The new type of covert war that has ensnared scientists, unleashed dangerous viruses and sought novel ways of exporting faulty equipment takes the nuclear stand-off into uncharted territory. If effective, it buys the US and its partners time, postponing the day when they might have to decide between a conventional strike against Iranian nuclear facilities, with all the risks that it engenders for the Middle East, or acceptance of Iran becoming a nuclear-capable state. But every war has a cost, and in this mysterious world of intrigue and sabotage, no one knows yet what the real price will be. “There’s too much happening behind the scenes with black programmes, assassinations, sabotage of equipment, cyberattacks,” says Albright of Isis. “There’s a loss of accountability … There’s a sense that a green light has been given on hitting the Iranian nuclear programme. But who is going to take the lead on establishing ground rules on what is too much? Where does it end?”

Picture of Iranian nuclear scientist Majid Shahriyari's car after he was assassinated in November 2010.  Photograph by Morteza Yarahmady.

If you want your ex-girlfriend or ex-boyfriend to come crawling back to you on their knees (even if they're dating somebody else now) you need to watch this video
right away...