These could have been the best of times for China.

China's probity, sobriety, and responsibility during the financial crisis made for a highly favorable contrast with the United States.

The U.S. has compounded the irresponsible behavior of the Bush years, both militarily and financially, with a significant abdication of its obligations as the world's only superpower and custodian of the world's reserve currency.  In this context, America's harping on the shortcomings of China are little more than a self-delusive attempt to recapture the glories of past decades, while distracting American citizens from the epic, serial failures of America's elites.

While the economy cries out for more stimulus, U.S. Republicans have seized control of the political discourse by shifting the focus from the profound challenges of regulating international markets in derivatives that seem virtually unregulatable.  To please their political (and contributor) base, they have reframed American economic anxieties in terms of the straw man of federal and state budget deficits.  Instead of advocating policies of political and fiscal forbearance, they are promoting ruinous but politically expedient deflationary policies, insisting that governments balance their budgets and turn their backs on the deficit spending measures that offer the best chance of escape from the economic morass.

It also rather amazing that, as the indigenous revolutionary wave across the Arab world repudiates the "democracy from abroad" formulation that lured the United States into the Iraq quagmire, Western politicians are proposing the same nostrums for Libya--sanctions, no fly zones, sanctions, the threat of humanitarian intervention, creation of a secessionist haven, and using Saudi Arabia as a front for US regional petroleum, diplomatic, and military priorities--that teed up the Iraq invasion.

America, it seems, has learned nothing, wants to learn nothing, and perhaps even thinks that trying to learn something from the events of the last ten years would be profoundly dangerous to America's self-esteem as the world's political, economic, and moral leader.

China had some reason to gloat.  And it was prepared to gloat.

However, in the words of my most recent piece in Asia Times, thanks to events in the Middle East, China is not in the position of being able to watch in bemusement as America drove its political and economic Hoovermobile off a cliff while flipping off China with the twin fingers of Freedom and Democracy.

As its response to the Arab revolutions reveals, China's authoritarian model is also not well-equipped to deal with the reality of dissent and dissatisfaction that are not neatly and reliably sterilized by economic growth.

There's a ghost in the machine, a craving for human dignity that can only be assuaged by a sense of political agency.

In a piece I wrote for Asia Times last week, Smelling salts for China's Jasmine dream, I propose that China has probably overestimated the popular toleration for authoritarianism, especially when it comes in the highly unpopular form of princeling rule that appears to be a dangerously unavoidable adjunct of authoritarianism.

In this week's piece, Denial also flows through China, I address the limits of a "growth is good" strategy that assumes that satisfaction with economic gains will trump political dissatisfaction.

I posit that China is whistling past the graveyard, counting on a show of official concern to paper over popular dissatisfaction with the government while it continues to place its bets on economic growth as the wellspring of its legitimacy.

The next step for the CCP could be straight out of the authoritarian-rule cookbook: managed multi-party democracy along the lines of the Russian model.

That means power concentrated in the executive branch, multi-party elections for an emasculated legislature, and cultivation of well-financed, conservative, pro-nationalist parties to contest the democratic space with dissenting political forces.

But for the time being, the ideal of a harmonious social model based on national progress under the unitary leadership of a beloved government is too seductive for the Chinese to discard in favor of the sordid realities of Western-style democratic bickering.

Here's an example of old-fashioned patriotic propaganda from Xinhua that may soon become an exercise in nostalgia.  It also describes the rather impressive execution of a large-scale evacuation. 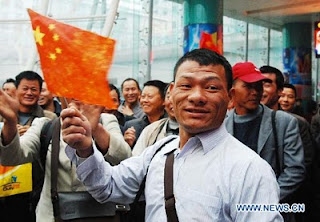 BEIJING, March 3 (Xinhua) -- After nine days of emergency evacuations and with no thought for the expense, China had plucked more than 35,000 citizens from the chaos in Libya by Wednesday.

The effort has proven to be a decisive success in China's largest-scale overseas evacuation since the birth of new China in 1949.

The massive, orderly and extraordinarily efficient evacuation is widely regarded as a vivid reflection of the Chinese government's motto of "putting people first and running the government in the interest of the people."

Thanks to the swift action of the Chinese government and timely orders issued by President Hu Jintao and Premier Wen Jiabao, the evacuation has been conducted in such a way that all-out efforts were mobilized to complete the mission.

That effort became especially important after thousands of Chinese nationals in the troubled North African country were robbed and a dozen were wounded as they tried to flee the violence.

The swift evacuation also benefited from China's growing national power and equally important, the advantage of the socialist system enabling the whole country to mobilize all of the necessary resources needed for an arduous mission.

The evacuation of more than 35,000 people from Libya is undoubtedly a huge and complex mission. From government organs to the Navy and Air Force, to overseas embassies and civil aviation authorities, the Chinese government mobilized all that was needed to withdraw its citizens from the volatile country by air, sea and land.

The evacuation shows that the Chinese government has paid more and more attention to the safety and interests of the grassroots Chinese.

Since the evacuation from the riots in East Timor in 2006, the Chinese government has rolled out dozens of overseas evacuation operations, extending timely rescues to tens of thousands Chinese nationals trapped in danger.

The current operation pursues the same course, but its scale, difficulty and efficiency are so outstanding that it can serve as a new milestone in China's overseas rescue history.

The success cannot be achieved without hard efforts made by the government at various levels, without solidarity or the strong will of the evacuees, or without the self-giving help offered by numerous Chinese compatriots.

The success in evacuation, which displays the traditional Chinese merits of solidarity, unwavering will and self-courage, also strengthened the rallying force of the whole country and the national pride of overseas Chinese.

"Welcome home!" When hearing the greeting from You Quan, deputy secretary-general of the State Council, upon their arrival at the airport in Beijing, many evacuees burst into tears.

At this very minute, all the overseas Chinese would keep in mind: though thousands of miles apart, China -- a prosperous, stable and strong homeland -- is always their safe haven linking them by hearts.
Posted by China Hand at 8:57 AM

eToro is the #1 forex broker for newbie and established traders.

There is SHOCKING news in the sports betting industry.

It's been said that every bettor must watch this,

Watch this now or stop betting on sports...