Palestine, “Preventive Diplomacy”, and Bashar al-Assad’s Annoying Attempt to Climb Out of the Grave Pre-Dug for Him in Syria 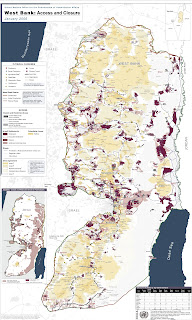 I have a piece up at Asia Times today about the Palestinian application for full state recognition at the UN, Palestine: Mission Accomplished for China.

The affair is a big black eye for President Obama, who gets to look like Israel’s rent boy.

The Chinese government is rather happy, since the Palestinian bid has shifted the focus away from the US as an international champion of democracy and human rights.

My reference to the West Bank  access map issued by the UN Office for Coordination of Humanitarian Affairs—which shows the extent of Israel’s physical encroachment on the territory—got mangled in the article.  I’m including it in this post.  It's a nice, big image full-size, and well worth the click.  However, it's still hard to read.  The biggest, bestest image is available at Wikipedia.

I make a couple of points in the article that I don’t see very often in coverage of the Middle East.

First, manufactured hysterics and an atmosphere of crisis are baked into Israel’s Middle East strategy.  The last thing the Netanyahu government wants is for Israel’s actions to be judged by the usual standards of national behavior, or allow the United States weigh its own interests in the scales against Israeli priorities.

Therefore, with a big assist from the right-wing megaphone in US politics, every issue is reduced to a litmus test: is the US with Israel, or against it?

PM Netanyahu could have boosted Israel’s image on the West Bank (thereby discomfiting Hamas) and allowed the United States to gain some sorely-needed cred with the Muslim world by not making a big deal out of what is actually a rather meaningless vote at the UN.

Instead, of course, the Israeli government apparently regarded Abbas’s bid as a heaven-sent opportunity to advance the narrative of Israel victimized at the UN and facing betrayal by its only ally.  Existential crisis!

Of course, humiliating and discrediting US President Barack Obama as a respected and effective interlocutor with the Muslim world was a delicious side-benefit.

The other point I make is that Palestine is pretty much a side issue.

The ghost at the UN banquet is Syria.

Almost everybody’s got the knives out for Bashar Assad, including the Gulf States, Turkey, the EU, the US...

I think it may be missing the point to regard dropping the hammer on Syria as a method to weaken Iran by depriving it of its only meaningful state ally in the region.

Assad is worthless as an ally from now on, and no good to anyone.  It seems unlikely that Assad can do anything effectively vis a vis Hezbollah and Hamas in the straits he’s in, or provide any other useful favors to Iran as ally or proxy.

It might be argued that the best way to deny Iran an effective Syrian ally is to let the totally isolated, sanctioned Assad regime remain in power.

But everybody wants Assad out—because they want in.

Turkey sees an opportunity to assert its credentials as an emerging power in the eastern Mediterranean by midwifing regime change in Damascus.

The West, I have a feeling, hopes for the creation of a New Syria that is too broke, too reliant on the IMF, too infatuated with Western-style democracy, and too deregulated and penetrated by Western corporations to ever cause trouble with non-aligned fantasies or an independent foreign policy.

The irony is that, as the various powers dig Assad’s grave, it looks like he’s climbing out of it.

The mass anti-government demonstrations have apparently faltered, with protesters switching to smaller hit and run demonstrations as the government has detained most of the opposition leader.

From the Saudi/Western point of view, it looks like the Syrian project might need a bit of help.

The awkward fact that Assad’s oppressive tactics may be working found a rather interesting echo in a Security Council debate yesterday on “preventive diplomacy”.

“Preventive diplomacy” was raised by UN Secretary General Ban Ki-moon in a report for the SC.  Judging from the enthusiastic response, the report represents another milestone in Ban’s labors to fashion himself and the UN into the perfect, compliant tool of Western diplomacy.

Ambassador Susan Rice , the eager architect of the Libyan intervention, was there to put rhetorical meat on the bones.

I think an extended quote from Foreign Policy’s Josh Rogin is in order here:

For the United States, preventive diplomacy means combining all the tools of international leverage -- including the use of force -- to prevent conflicts from breaking out or preventing hot conflicts from getting out of hand. It also means building sustainable economies and functioning democracies, with the goal of creating societies that can manage disputes on the national and regional levels.

"Peace, prosperity, and democracy cannot endure if imposed from the outside," U.S. Ambassador to the United Nations Susan Rice said at the session. She covered a lot of ground in her speech, not explicitly defending armed intervention but arguing for its use in some cases. "We should cease to make false distinctions between peacekeeping and prevention; they are in fact inextricably linked," she said.

She also argued that the use of sanctions under Chapter VII of the U.N. charter can be a tool of conflict prevention, a position council members such as China and Russian don't support.

Some other countries used the meeting to explicitly defend the U.N.-sanctioned international military intervention in Libya and called for harsher U.N. measures against the Syrian regime.

"When conflict looms, the world looks to the U.N. for a decisive response," said British Foreign Minister William Hague. "In Libya... our swift action prevented a human catastrophe and saved the lives of thousands of civilians."

Hague went on to say that the British government viewed U.N. Security Council action as "long overdue" on Syria. "The consequences of inaction would weigh heavily upon us if we turn a blind eye to murder and oppression," he said.

German Foreign Minister Guido Westerwelle called on the Security Council to "send a strong message to the government in Damascus to stop the killing of its people."

The sound you hear is the Treaty of Westphalia—the principle that sovereign states get to do basically what they want as long as it stays inside their borders—getting another trip through the neo-colonial meat grinder.

The doctrine has an unnerving side, one that Ambassador Rice and other enthusiastic proponents will undoubtedly disregard.

It opens the door to armed intervention on behalf of unsuccessful democratic movements, not just successful ones.

It asserts the principle that local democratic movements can be nudged along by outside forces, even when they aren’t doing particularly well.

Which means it’s a blank check.

And, of course, it’s tailor-made for Syria.