“Israel to attack Iran” is a hardy if never-blooming perennial.  I rerun this post (originally written on the occasion of Israel’s bombing of an alleged nuclear facility in Syria in 2007) every year as a reminder of the rather daunting technical issues involved in flying from Israel to Iran and blowing things up in a truly convincing fashion, even as the same threats are put forward again and again.
Blowing things up in a truly convincing fashion involves a) flying there b) getting refueled in mid-air c) getting rearmed d) going back and do it again and again against Iran’s dispersed and hardened nuclear facilities.
So it won’t be an orgasmic one-off like the Osiraq reactor strike against Iraq, a nice quasi-surgical demonstration of civilized Israeli warfare.  It would be a grinding, prolonged assault, presumably with plenty of Iranian casualties, and with the unmistakable, sustained assistance of a local ally to keep the planes in the air.
Iran’s nuclear facilities are beyond the combat range of Israel’s fighter bombers.  So Israeli planes would not only need to overfly Iraq or Saudi Arabia and/or Turkey with or without permission; they would have need to get refueled over Iraq or Saudi Arabia as well on the return trip.
It doesn’t look like the US is going to provide refueling facilities, leaving it up to local partners (unlikely/infeasible) or Israel itself.
This year, the presence of a pro-Iranian government in Iraq would make it necessary for Israel to cross Iraqi airspace without permission, and defy the Iraqi government in prolonged fashion by having Israel’s tankers hovering over Iraq for multiple bouts of mid-air refueling.
And I don’t think Turkey’s going to be keen about permitting overflight, since they aren’t even signing on to the proposed bilateral sanctions against Iran.
That leaves the Saudis.  Saudi Arabia is in the midst of an aggressive rollback against Iran in particular and Shi’ites in general, and the London Times quoted an anonymous Saudi source as saying Israeli jets attacking Iran would be waved through Saudi airspace.
Doesn’t quite pass the smell test for me, though.  I don’t think the Saudi government is happy to harass the Iranians, but I don’t think they have the stomach for taking the Israeli side in a full-blown war.
On the record comments in December from Turki al-Faisal, Saudi Arabia’s top security honcho, will undoubtedly be dismissed as disinformation by Western observers because he’s calling for a nuclear-free Middle East (a slap at Israel!), but I think his statement more closely reflect Saudi reality:
Replying to a question about the possibility of an attack on Iran to force it to roll back its nuclear program and the impact of such an action, Prince Turki reiterated that the impact will be “calamitous … cataclysmic, not just catastrophic.”


He said that Iranian actions have provoked worldwide opposition but at the same time suggests that Iran's nuclear program is being singled out, while Israel is being given a clean chit. Any unilateral decision to launch a military attack aimed at halting the nuclear program of Iran could have huge consequences, he warned.
As to the technical issues of refueling, the IDF has made a big deal of demonstrating that it does not need US refueling services, as this report indicates:
In the last days of May and first week of June, 2008, Israel staged an impressive and well-reported exercise over Crete with the participation of the Greek air force. More than 100 Israeli F-16 and F-15 fighter jets, as well as Israeli rescue helicopters and mid-air refueling planes flew a massive number of mock strikes. Israeli planes reportedly never landed but were continuously refueled from airborne platforms. Israel demonstrated that a 1400 km distance could be negotiated with Israeli aircraft remaining aloft and effective. Iran’s Natanz nuclear enrichment facility is 1400 km from Israel.
Early in 2011, the Jersusalem Post reported Israel took delivery of a 707 for conversion into a tanker for refueling its F15-I fighter bombers coming back for Iran.  How many additional tankers Israel has is “classified”, but an unsourced thread puts the total number of converted 707s to eight.
The JPost article went on to say:
The air force has conducted a major upgrade of its tanker fleet in recent years and now plans to wait for the US Air Force to choose its future tanker before buying additional aircraft.
Reading between the lines, maybe the United States is not particularly keen on delivering tankers and enhancing Israel’s capability to conduct unilateral air operations against Iran.
Accordingto Karl Vick at Time magazine, Israel doesn’t have the tanker capacity or, for that matter the ordnance, to devastate Iran for weeks:
What everyone agrees, however, is that as formidable as the Israeli Air Force is, it simply lacks the capacity to mount the kind of sustained, weeks-long aerial bombardment required to knock down Iran’s nuclear program, with the requisite pauses for damage assessments followed by fresh waves of bombing.  Without forward platforms like air craft carriers, Israel’s air armada must rely on mid-air refueling to reach targets more than 1,000 miles away, and anyone who reads Israel’s order of battle sees it simply doesn’t have but a half dozen or so.  Another drawback noted by analysts is Israel’s inventory of bunker-busting bombs, the sort that penetrate deep into concrete or rock that shield the centrifuge arrays at Natanz and now Fordow, near Qum.  Israel has loads of GBU-28s, which might penetrate Natanz. But only the U.S. Air Force has the 30,000-pound Massive Ordnance Penetrator that could take on Fordow, the mountainside redoubt where critics suspect Iran would enrich uranium to military levels.
So, why do we keep talking about Israel’s threats to attack Iran?
I’ve frequently commented that the main purpose of the attack-Iran threat is to yank America’s chain, and forestall possible rapprochement between the United States and Iran.
The Obama administration knows this, I think, and I find its politically-motivated willingness to continue with the sanctions charade, and the low level but cruel and destabilizing program of assassination, sabotage, and economic warfare against Iran rather shameful.
Friday, October 05, 2007
The Mystery of the Dropped Fuel Tanks 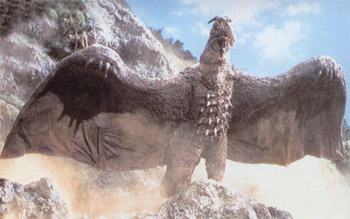 An e-mail from a reader concerning the Israeli raid on a purported North-Korea-linked military facility in Syria stated:

The F-15E is a big, fat hog of a plane, sometimes nicknamed the Flying Tennis Court, or Rodan for its resemblance to the ungainly but murderous superpterodactyl featured in the Godzilla movies.

To achieve this radius, it needs its internal fuel plus external fuel.

So: War with Iran—it’s up to us. Don’t know whether that’s reassuring or disturbing.
Posted by China Hand at 2:25 PM

If you want your ex-girlfriend or ex-boyfriend to come crawling back to you on their knees (even if they're dating somebody else now) you gotta watch this video
right away...