If Assad loses control of his armed forces and the regime loses its legitimacy as the expression of Syrian nationalism, the ingredients don’t seem there for a Lebanon-style civil war with local proxies armed by regional or global actors.

That’s because I don’t think that Russia, China, or even Iran see any upside in arming some Ba’ath regime generals of primarily Alawite backgrounds trying to beat back an insurrection powered largely by Syria’s dominant Sunni majority.

Alawites are estimated at 12% of Syria’s largely Sunni population and don’t look to do well if the Syrian uprising transforms into an explicitly sectarian confrontation.

Lebanon, on the other hand, is split between Christians, Sunnis, and Shi’ites with no one group holding a clear demographic advantage (especially since there hasn’t been an official census in Lebanon for decades), providing multiple opportunities for regional and global patrons to make mischief through their durable local proxies.

If regime collapse occurs in Syria, a disorganized triumph by various armed Sunni Arab groups, some with a significant Islamist tinge, and a messy clean-up operation by the West, Turkey, and the Gulf States appears to be in the offing.

I don’t think anybody is terribly interested in that kind of outcome.

The whole Sunni-Shi’a/spillover into Lebanon scenario is bandied about a lot, but I think the ghost at the regime change banquet, as it were, is not another round of misery for little Lebanon; it is the prospect of more Kurd-related heartburn for rising regional power Turkey.

A sign of Turkish sensitivities is this banned map showing the distribution of ethnic Kurdish populations across northeastern Syria, eastern Turkey, northern Iraq, and parts of Iran. 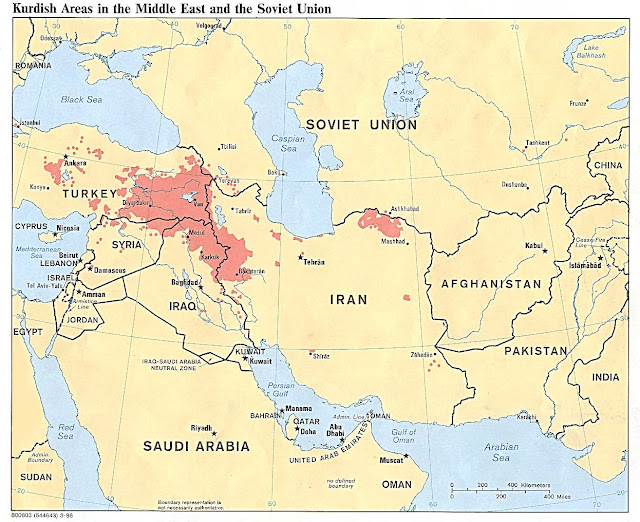 As a disgruntled content screener/whistleblower revealed , this map is banned on Facebook in Turkey (together with “blatant (obvious) depiction of camel toes and moose knuckles”):

As the Syrian conflict has militarized and the armed opposition has acquired a Sunni sectarian tinge accentuated by its Gulf backing, Syrian Kurds (who make up perhaps 9% of the population) have for the most part sat on the fence.

The Syrian National Council, a bastion of Arab chauvinism thanks to its domination by the Muslim Brotherhood (Kurds are of Iranian, not Arab ethnicity) has put down its marker:

Samir Nashar, now a member of the seven person General Secretariat of the SNC was even more explicit, in August 2011 saying “We accuse the Kurdish parties of not effectively participating in the Syrian revolution.  It seems that these parties continue to bet on a dialogue with the regime. This stance will certainly have consequences after the fall of the regime.”

As the struggle has militarized, Kurds probably find even less reasons for reassurance.  The anti-government armed groups competing for Gulf emirate support have displayed a certain Arab Islamist fervor admixed with the anti-Iranian xenophobia that is de rigeur these days.

If a Sunni majority regime takes power in Damascus, it will probably find itself wrangling with its Kurdish population, with the possibility that the struggles of energized and/or threatened Syrian Kurds will find an echo in eastern Turkey.

It would appear that Turkey’s reluctance to push forward with overthrowing the Assad regime and midwifing the creation of a friendly new Syrian government reflects its concern that a pickup in Damascus will be offset by headaches in Kurdistan.

nice idea.. thanks for sharing.