So You Say You Want a Pussy Riot?

[I tweaked, expanded, and improved this post as Church, Party, State, Girdles and Pussy Riot in Russia]

The Pussy Riot sentences (and the original prosecution) were misguided and excessive.

Putin undoubtedly found the band’s 90-second escapade of punk calisthenics in the Church of the Savior offensive and a personal insult.  The Russian Orthodox Church is a major political prop for Putin and he probably thought he could reassure the church of his steadfastness as defender of the faith as well as score political points with conservative Russians with a heavy-handed slapdown.

In an interesting blurring of the line between journalistic objectivity and human-rights agitprop, the armchair revolutionaries at the Guardian chose to create a video for the band’s latest release showing the women looking at turns gorgeous, defiant, and adorable.

That, combined with criticism of the sentence from the Obama administration and other human rights worthies, may be enough to convince Putin to keep the women in the can to serve their full term.

After all, if the sentences were commuted in response to the Russian Orthodox Church’s expressions of “foregiveness” and Putin’s own political calculations, it will be seen as a victory for the band—and inspiration for copycats and excuse for foreign meddling-- and not a welcome display of mercy by the administration.

However, it remains to be seen if shifting the terms of debate to the free-speech rights of punk rock provocateurs and away from Putin’s close and unhealthy ties to the Russian Orthodox Church (which the Pussy Riot outrage was designed to highlight) will accelerate the erosion of his power.

Here’s something I wrote last November on Putin’s religious strategy on the occasion of the visit of a treasured relic, the Girdle of St. Mary, to Russia.  The massive turnout to adore the relic implies that there is more political capital for Putin in championing the church than appeasing the followers of Pussy Riot:

One thing that’s pretty clear is that religious movements are, for the most part, conservative and have served as bulwarks of authoritarianism (and a shield against challenges to the wealth and power of the privileged) at least since the days of the Social Democrats.

Authoritarian atheism, after a brief, 20th century heyday under Hitler, Mao, and Stalin, is perhaps headed for the dustbin of history.

Religion is too good for business, billionaires, and bosses, both in liberal democracies and post-Communist states.

Modern plutocracies have rediscovered the fact that there’s nothing like appeals to religious identity to split the electorate and marginalize those obstreperous liberal activists whose political views usually combine irreligious sentiments with enthusiasm for democracy and a nasty penchant for economic justice.

I think the Russians under Putin have broken the code.  Via  RIA Novosti: 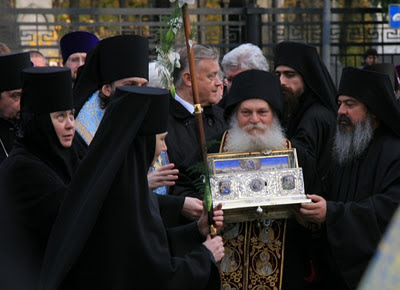 A remarkable procession is currently taking place in Russia…

The Belt of the Virgin Mary, otherwise referred to as the Precious Sash, or Cincture, of Our Most Holy Lady Theotokos – the holy treasure of the Vatopedi Monastery on Mount Athos in Greece, is travelling abroad for the first time. The Belt is travelling in style. It flies in a private jet, chartered by the tour’s organizer – the influential St. Andrew Foundation, and is accompanied by six Vatopedi monks. In St. Petersburg, it was welcomed by none other than Prime Minister Vladimir Putin. In Yekaterinburg, Russia's fourth largest city, Governor Alexander Misharin and the region’s bishop, Metropolitan Kirill, met the relic with the guard of honor before a procession of some 15,000 people took it to the cathedral.

The numbers are stunning indeed. In St. Petersburg, estimated one million people came to venerate the Belt in three days and nights, according to the local media. People stood in line for twelve to fourteen hours to be able to kiss the silver box containing the piece of camel wool fabric believed to have been woven and worn by the Virgin Mary, and take a small band blessed on the relic. In Yekaterinburg it was 300,000, in Krasnoyarsk – 100,000.  The relic has already been to the country’s Far East – in Vladivostok, and the Far North – in Norilsk, beyond the Arctic Circle. Volgograd and Stavropol in the South are in the days to come. And it is hard to imagine what kind of crowds will gather in Moscow when, by the end of November, the relic arrives in the capital before leaving Russia for good.

According to the Vatopedi Monastery, the Virgin Mary dropped the belt from heaven for St.Thomas:

According to the Sacred Tradition and the history of our Church, the Most Holy Theotokos [Virgin Mary] three days after she fell asleep she rose from the dead and ascended in body to the heavens. During her ascension, she gave her Holy Belt to the Apostle Thomas.  Thomas, along with the rest of the holy Apostles, opened up her grave and didn't find the body of the Theotokos. In this way the Holy Belt is proof for our Church of her Resurrection and bodily ascension to the heavens, and, in a word, at her metastasis.

From AFP, the socio-political angle:

“This event is of huge significance especially when it comes to strengthening people’s faith,” Father Kirill, a spokesman for the Saint Petersburg diocese, told AFP.

“And the fact that this is such a singular relic helping women is especially important for our city and our country, where the demographic situation leaves much to be desired.”

Russian leaders have called the shrinking population a matter of national security.

The country’s latest census released earlier this year showed that the country’s population had shrunk by 2.2 million people since 2002 and now stands at 142.9 million.


There are also photos of Putin and Medvedev solemnly observing the reliquary.   Putin chose to appear in his Action Man uniform (no tie, unbuttoned collar), inviting the question of whether his expression is one of stunned reverence or sullen challenge to a potential rival. 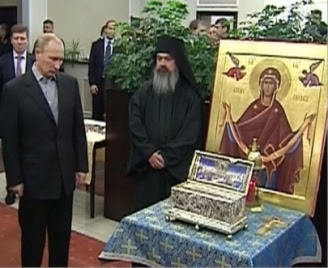 All joking aside, Vladimir Putin  has jettisoned the official atheism of the KGB and has established the Russian state as a vigorous promoter of the Russian Orthodox Church--and vice versa, as Michael Binyon wrote for The Humanist in 2008:

Putin … is fervently and ostentatiously observant in his religious beliefs. As a result, the Russian Orthodox Church, now richer and more powerful than at any time for almost a century, has been at the centre of all state ceremonies, is a strong supporter of Putin’s policies and has resumed its traditional role as the spiritual arm of the Russian state. Restored churches can be seen everywhere. There are now some 28,000 parish churches in Russia, 732 monasteries and convents and thousands of priests training in seminaries. Putin delivers speeches at major religious festivals; in return the Patriarch acts as his agent in extending his control over all sectors of society. Church and Communist Party have become almost interchangeable.

As reported by Ministry Values in 2010, President Medvedev  is equally forthright about playing the religious card:

An icon of Jesus hidden in a Kremlin gate used by Soviet leaders but bricked over in the 1930s during communist times was restored on Saturday to public view.

Russian President Medvedev,  on the day that marks the Virgin Mary being taken into heaven, said the "Saviour Smolensky" icon, which depicts Jesus holding open the New Testament, with Russian saints below him, will provide moral support to Russia.

"Now that we've got the icon back, our country secures an additional defense."

The “influential St. Andrew Foundation” cited in the Novosti report—the outfit that sent the private jet to pick up the belt—is a religious foundation run by Vladimir Yakunin, a member of Putin’s inner circle and reputedly a veteran of the KGB’s First Directorate.  He is also president of the gigantic state-owned Russian Railways.

Presumably, Yakunin is there to lock up the support of the Russian Orthodox hierarchy for Putin and whatever subsequent strongman craves well-financed, pervasive, and activist backing from the conservative church.

In 2010, European CEO breathlessly pegged him as “the man to watch” as a potential successor to Putin:

This ex-KBG spook is discreet, bright and endowed with a potentially huge powerbase. Vladimir Yakunin has a neighbouring lake-side dacha with prime minister (and former president) Putin. He’s often mentioned in the same breath as other successors to his all-powerful boss…

He’s patently bright and has certainly proved himself able and willing to move with the times. After the Soviet Union collapsed he moved into banking and business before being appointed as deputy transport minister in 2000. Many ex-KGB personnel were able to take advantage of new industry licences and Yakunin, along with some physicist friends, were no exception. In time they established Bank Russia, which later financed Putin’s re-election campaign in 2004.

Yet it would be a mistake to label this discreetly influential man as just another power-hungry party apparatchik or ex-KGB “siloviki”, the unflattering term given to describe the network of ex and current state-security officers. He has a fascination with Russia’s religious legacy and has helped launch a foundation that encourages reconciliation of the Russian Orthodox Church.

Yakunin’s “fascination with Russia’s religious legacy”, and his evolution from amoral KGB apparatchik to creepy, "values"-promoting bigot is reflected in remarks like this:

The head of the Council of Trustees of the St. Andrew the First-Called Foundation and JSC Russian Railways, Vladimir Yakunin, believes tolerance to homosexuality is harmful.

"I think traditional family values and childbearing should not be substituted with some notorious imitations invented by the homosexual propaganda which could be only arbitrarily called attributes of a democratic society," he said at the opening ceremony of the 15th World Russian People's Council held on Wednesday in Moscow.

Yakunin told that he wanted to address this issue in his speech delivered at the Berlin forum last year, but he was warned that "this country will hardly understand you; and you may have troubles here."

"Nothing of the kind. There was not a single protest made and not a single person left the room because I mentioned that the propaganda of homosexuality was the same pollutant for the social environment as other pollutants were for the natural one," he said.

Getting back to the Cincture of the Virgin Mary, another version of the relic is held by the Jacobite Syrian Church in Homs—yes, Homs, ground zero of the anti-Assad rebellion-- under considerably less glamorous conditions. The reliquary, and a history of Syria’s girdle and religious art showing its bestowal on St. Thomas, can be viewed on a very interesting Flickr feed by Rhoneil Victor de Leon.

On its website, the Cathedral of St. Mary in Homs claims its belt is the one that Mary dropped to St. Thomas from heaven, was brought to Syria in  476 and hidden in the church, and was rediscovered in 1953.

Remarkably, a piece of the Homs belt resides in Jacksonville, Florida at the Mother of God Zunoro Syrian Orthodox Church.  The Patriarch of Damascus arranged to bestow a section of the belt on the new church.  The relic was first adored at a sister church in Paramus, NJ, before taking up permanent residence in Florida in 1998.

Any competing claim for the Homs belt is not addressed on the Mt. Athos website, which plausibly traces the provenance of its belt back to the Byzantine Empire in the 12th century and its donation to Mt. Athos by Emperor John the 6th Katakouzinos (1347-1355).