…The Battle of Algiers

As the moving finger of chaos hovered over Mali and Algeria last week, I took another look at Gillo Pontecorvo’s 1966 masterpiece, The Battle of Algiers.

I am somewhat puzzled that this movie is not at the heart of the Zero Dark Thirty debate.

Because in many ways, perhaps intentionally, ZDT is the mirror-image doppelganger of Algiers.

Both of them effectively employ an objective documentary style to depict a brutal, successful exercise in counter-terrorism.

And both of them deal with torture.

In The Battle of Algiers, torture works!  Right away! In the very first scene!  Short-circuiting any need for liberal handwringing or right-wing defensiveness for the next two hours of the film! 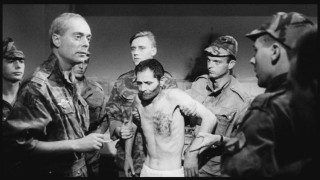 The film opens with Colonel Mathieu, the supremely able, intelligent, and ruthless commander of the French counter-terror effort in Algiers against the Algerian National Liberation Front or FLN, striding in to confront a scrawny, scraggly, beaten little man surrounded by a crowd of sturdy, confident French soldiers in crisp camo (in an interesting irony, Pontecorvo revealed that the “soldiers” were cast from students from Kabilye—an Algerian district known for its light-skinned Berbers-- at the local university).

“He’s come clean,” a soldier tells the general and, sure enough, in the very next scene the troops are outside the refuge of FLN leader Ali la Pointe, setting in motion the final confrontation that will 1) serve as the framing for a movie-length flashback depicting the FLN’s struggle in Algiers against the French and 2) signal the virtual annihilation of the FLN as a significant force inside the city.

The big difference, between the two films, of course, is perspective.

In Algiers, we are immersed in the perspective of the Algerian revolutionaries.  Even in the first scene, before anyone is introduced or anything explained, we witness the misery and anguish of the distraught informant, his chest disfigured by the flame of a blowtorch, who, as he is clad in French camo to serve as Judas goat by the cheery soldiers, runs to the window and cries out in despair before knuckling under to a soldier’s matter-of-fact persuasion: “Do you really want another round?”

In Zero Dark Thirty, the emphasis is on the determination, forbearance, and the frustration of the torturers, especially Jason Clarke, as they struggle to crack the Bin Laden case.

Here I must thank ZDT director Karen Bigelow for seconding my previous assertion that she has a fascination with torture as a transgressive test of heroism (for the torturer), not as a police tactic.  In a statement she gave to the LA Times as part of her effort to repair and advance the prospects of ZDT as best-picture Oscar bait, Ms. Bigelow stated:

I think Osama bin Laden was found due to ingenious detective work. Torture was, however, as we all know, employed in the early years of the hunt. That doesn't mean it was the key to finding Bin Laden. It means it is a part of the story we couldn't ignore. …
Bin Laden wasn't defeated by superheroes zooming down from the sky; he was defeated by ordinary Americans who fought bravely even as they sometimes crossed moral lines, who labored greatly and intently, who gave all of themselves in both victory and defeat, in life and in death, for the defense of this nation.

Unfortunately for Ms. Bigelow and ZDT, I think that most people—including most Oscar voters—reflexively sympathize with the torturee, rather than the torturer.

And that is what gives Pontecorvo’s film a great deal of its power.  It immerses us in a world—and shows us the faces and motivations--of people who do things that can and do get them tortured.  (One can only thank the movie gods that the filmmakers did not—or could not—follow through with their original plan of parachuting Paul Newman into the script as a western journalist in order to give Western audience somebody to identify with.)

Given America’s foreign policy obsession with the Muslim world and Arab politics over the last decade, it is surprising that The Battle of Algiers doesn’t come up more often.

There was a mini-boomlet of interest in 2003, when the Pentagon announced a screening to educate officers on the dynamics of urban counterinsurgency during the difficulties in Iraq.  And there was a flurry of showings on the 50th anniversary of Algerian independence last year.  But the film is pretty much MIA.

I guess it has something to do with the Marxist politics of Pontecorvo.

But it certainly made modern neo-liberals uncomfortable that the Black Panthers and the Weather  Underground reportedly screened TBOA as a training film (presumably skipping over the parts where the militant organization is totally destroyed by The Man) and, perhaps, inspired efforts to consign the film to the end-of-history rubbish heap as a piece of naïve agitprop.

Therefore, I detect certain anxious efforts to disparage the film’s impact and its relevance with derisive sneering along the lines of “Well, your precious people’s revolution didn’t turn out so great in the end, now did it?”

Certainly, the Algerian revolution turned to sh*t with the usual alacrity—even during the period depicted in the film there were apparently some factional rubouts and after independence there was a great deal of unpleasant fighting between rival armed groups and a quick resort to authoritarian rule, punctuated with the suspension of the second round of democratic elections in 1991 to prevent a victory by the Islamist Party, the FIS.

However, the hope and enthusiasm depicted at the close of the movie—when, in 1962, two years after the French win the “Battle of Algiers”, the French occupation crumbled before a wave of national unrest and insurrection originating beyond the capital—was real.

And Pontecorvo does not shy away from showing the bloody dynamics of the struggle from the FLN side as well as the French side.  French torture practices are shown in a brief montage including hanging, electric shock, burning, and our old friend, waterboarding (for a devastating, in-depth look at how the torture regime in Algeria worked, and didn't work, read Dr. Darius Rejali's 2004 piece in Salon).  But the centerpiece of the film is the horrific simultaneous terror bombing of a bar, a milk bar filled with teenagers and a baby, and the downtown Air France office in Algiers by the FLN, using Arab women in European disguises to place the explosives.

The Battle of Algiers paints a convincing picture of the collapse of Western colonial rule, a process that even a no-holds-barred commitment to torture and the triumphant dynamiting of Ali la Pointe in his lair cannot forestall.

Zero Dark Thirty, on the other hand, puts us inside the national security bureaucracy instead of out on the Arab street, and depicts the devotion of all this torture, anger, and effort toward the destruction of a single man—Osama bin Laden—perhaps in the vain hope that the forces that obsess and threaten the United States will die with him.

Pontecorvo demonstrated a perspective that was more Marxist-objective than Leninist-doctrinaire or Maoist-groupie in a film he made for Italian television, Return to Algiers, in 1992.

Fortunately, the film with English subtitles has been posted on Youtube  and you can join the five hundred or so people who have already seen it there.  It is well worth digging out the six clips (takes a bit of doing) and watching.

Pontecorvo records the rancor and frustration following the suspension of the 1991 elections.  When he tries to return to his old haunts with his film crew, he is harassed and harangued by bearded Islamists.  In the Casbah, housewives point out the general decrepitude and neglect of their homes, making Pontecorvo draw the conclusion that the revolutionaries have taken the place of the French—both as privileged insiders, and as targets for the revolutionary resentment of the insulted and injured poor of Algeria.

He reports on the fear and anger of educated women at the threat of the threat of Islamic anti-feminism; he also interviews some giggling girls who would prefer that their school institute sex segregation.

After a lot of miserable contention, the government media informs the public that the visiting European is the filmmaker responsible for The Battle of Algiers, and Pontecorvo and his crew finally get some love from the crowds on the street in Algiers.  And he films a probing interview with Mohamed Boudiaf, the exiled FLN warhorse installed in the presidency by the military after the election fiasco, just before the old man was assassinated.

As far as Pontecorvo is concerned, you get the image of a filmmaker prepared to look reality in the face, both in 1966 and in 1992.

Kathryn Bigelow also wants to look reality in the face.  Too bad it’s the face of a torturer.


P.S. Criterion did their usual magnificent job on The Battle of Algiers, with a three-disc package of film and documentaries.  For me, not steeped in the lore of TBOA, it was a genuine shock and surprise to learn about the background of the actor who played FLN leader El-hadi Jafar.  He is interviewed on one of the disc 3 documentaries.

P.P.S.  Screengrab from Todd Alcott's blog, which has a very interesting discussion of the cinematic merits of TBOA.

Thank you for writing such a cogent analysis of "perspectives". I watched 'Algiers' back when the Pentagon made me aware of it and I still remember it now nearly a decade later. That says a lot as most movies or pieces of art are instantly forgotten.

And another thanks for sharing the 1992 documentary which I was unaware of. Not only its age but its whole format seems unusual and foreign today. Though his sympathies are clear he is not out to bash their culture as inferior or in need of a lesson or two from the west. They're learning their lessons in that chaos we all inhabit. Indeed he is "prepared to look reality in the face," and may I add, not be afraid to tell it how he sees it.

Searching for the Ultimate Dating Site? Join and find your perfect date.

I watched a lot of good movies being broadcast on the online TV channels of the new Mobdro and Brasil tv apps. Readers can download these two applications at the link I share here:
https://mobdroportugal.net/
https://apkrapido.com/

I used to watch this movie in mobdro app - the world's most popular free TV and movie viewer in 2020. Download the mobdro app.

Gomovies.re - Watch all of your favorite movies/TV-shows in HD from one place for free online. Watch HD Movies Online For Free and Download the latest movies without Registration at GoMovies. watch free HD movies

Thank you for sharing you can download Listas IPTV safest quality https://coimobile.com/listas-iptv/

I like your article, I would like to know if anyone downloads Minecraft at:https://modcombo.com/id/minecraft.html . Let's play Minecraft with me.

Sona Mina said...
This comment has been removed by the author.
8:04 PM

TechUpNew said...
This comment has been removed by the author.
7:54 PM

Your blog is awesome. Classic game site with emulator here

The article you have share is just amazing. It will help the viewers to get the latest knowledge. If someone has soft corner for games, he/she can play an amazing game Carrom Pool.

I like your article, I would like to know if anyone downloads the games at modilimitado Let's play games with me.

Do you like apk mod games or go to https://techloky.com/ to experience everything the best