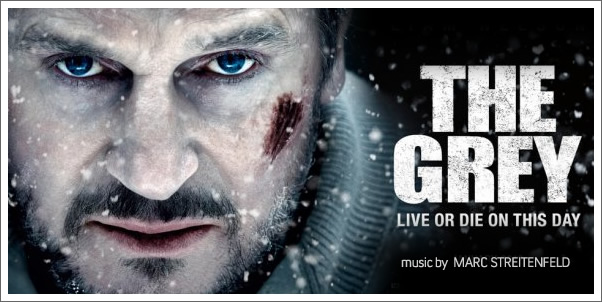 By a creepy coincidence, I watched the man vs. wolf in the Arctic thriller The Grey the same week that Roger Ebert died.

Creepy because The Grey is a relentless meditation on death and Roger Ebert, who had already experienced his first, traumatic bout of cancer when the film came out in 2012, had this to say about the effect that the movie had on him:

I was…stunned with despair. It so happened that there were two movies scheduled that day in the Lake Street Screening Room (where we local critics see many new releases). After "The Grey" was over, I watched the second film for 30 minutes and then got up and walked out of the theater. It was the first time I've ever walked out of a film because of the previous film. The way I was feeling in my gut, it just wouldn't have been fair to the next film.

Caution: non-stop spoilers from here on in.

In The Grey everybody dies.  Literally everybody, and I mean “literally” literally.  After a plane crash strands them in the Arctic at the mercy of a wolfpack, all humans die.  The crazy guy dies, the cool black guy dies, the bragging ex-con dies, the religious guy dies, the together young guy dies…and Liam Neeson dies…after cursing god and mourning life’s utter lack of meaning. 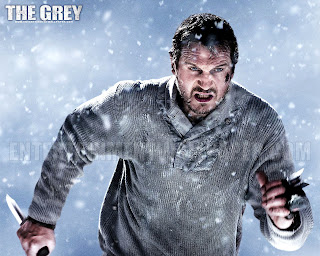 Don’t be fooled by the “thriller” peg that the marketing team tried to hang on the movie.  When Liam Neeson pulls out his hunting knife and straps glass shards on his fists to go mano a lobo, he’s not headed for victory, a trip on a rescue helicopter, and a tearfully happy family reunion.  It’s his last step into annihilation.

The Grey eschews feel-good kick-ass/triumph of the spirit clichés for nihilistic/atheistic/existentialist European art-house inspired angst.  Pretty amazing that a US studio gave it the green light, and that the film makers weren’t flayed by the Christian/family values crowd for the no god/no afterlife pessimism.

Understandably, given the film’s interest in tackling the big questions head-on, The Grey appeared on several ten-best lists.

Aside from Roger Ebert’s passing, the movie gains additional pathos from the depiction of Liam Neeson (whose wife, Natasha Richardson, had perished in a skiing accident) as experiencing suicidal despair after the death of his wife.  The co-producer of the film, Tony Scott—who urged the director, Jay Carnahan, not to change a thing, presumably after the studios balked at the film’s unmarketable howl of despair-- committed suicide in 2012 by jumping off the Vincent Thomas Bridge in Long Beach for reasons that are not publicly known (initial reports that he killed himself over an inoperable brain tumor were apparently incorrect).

The only people that really gave The Grey a hard time were wolf defenders, who took umbrage at the depiction of the pack as death-dealing psychos instead of supremely adaptive kingpins of a complex and unforgiving arctic ecosystem.

I had my problems with the movie’s depiction of wolf-related human mortality incidents.    The wolves are allegorical stand-ins for Death with a capital D and display little of the intelligence, patience, coordination, and endurance I imagine a real-life pack could have brought to bear if it decided to harvest the vulnerable, meat-heavy crowd of humans that foolishly abandoned the crash site to seek “safety” in the woods (in the final irony, just before dying, Neeson understands that, instead of leading the group to deliverance, he has brought them straight to the wolves’ den where, according to the movie, the pack is utterly dedicated to exterminating any interlopers).

Another problem springs from the depiction of death as “something that slides over you”.  In one of the film’s most moving scenes, Neeson’s character coaxes a mortally wounded crash survivor into confronting, accepting, and even welcoming his own death.  This comforting—and, in the case of somebody experiencing rapid and fatal exsanguination thanks to uncontrollable bleeding from a major artery, perhaps relatively realistic--scenario is overused in the subsequent demise of several characters.

Not speaking from personal experience, I nevertheless am pretty sure that dismemberment at the paws and jaws of even an efficient carnivore like a wolf (and I’m not even talking about the ad hoc mayhem inflicted by a bear that has decided to exercise its prerogative as an opportunistic omnivore to add human flesh to its diet) is terrifying and painful.

Ironically for this profoundly skeptical film, the idea that it isn’t sprang from 19th-century religion’s rear-guard battle against Darwinism.

Attempting to offer an alternative to the overarching Darwinist order shaped by struggle, mortality, extinction, and natural selection, religious figures tried to construct an alternative model of the natural world in which god’s wisdom and benevolence was manifest in every aspect of nature.

The evidence of savagery in carnivore operations proved a hard religious sell, since it was difficult to understand why god would allow a big cat to rip open Bambi’s abdomen and devour her steaming guts before her horrified, dying eyes.

One proposed solution was to claim that the victims were spared excessive pain and suffering.  The noted African missionary, David Livingstone (as in, “Dr. Livingstone, I presume…”), gave credence to this view with a famous account—which I remember vividly from reading it as a child—of the state of dreamy, painless acceptance he drifted into as he was being mauled by a lion during one of his African sojourns:

...looking half round I saw the lion in the act of springing upon me. He caught me by the shoulder and we both came to the ground together. Growling horribly he shook me as a terrier dog does a rat. The shock produced a stupor similar to that which seems to be felt by a mouse after the first gripe of the cat. It caused a sort of dreaminess in which there was no sense of pain nor feeling of terror though I was quite conscious of all that was happening. It was like what patients partially under the influence of chloroform describe: they see the operation but do not feel the knife. This placidity is probably produced in all animals killed by the carnivora and if so is a merciful provision of Creator for lessening the pain of death.

As a counter-example, the Darwinists rummaged through natural history to come up with the hideous story of the wasp that lays eggs on a living, perambulating caterpillar; the larva hatch and eat their host alive.  Apparently, this is accompanied by the agonized writhing of the caterpillar, which nobody tried to spin into evidence of an ecstatic acceptance of god’s will...but was good enough to inspire Ridley Scott's Alien.

However, in a famous 1982 essay, evolutionist/atheist Stephen Gould turned the tables and took Darwinists to task for anthropomorphizing caterpillar suffering, instead of simply accepting with cool detachment the crude, unconquerable power of biological adaptation.  Indeed, it's recently been discovered that a symbiotic virus injected by the wasp invades the caterpillar's brain, exciting it to active cooperation to assure the success of its parastic brood.

But even if the caterpillar is not hating the whole eaten-alive-from-inside thing too much, the scenario still doesn't look like god's master plan.

Death sucks and if, as The Grey believes, that’s all there is, I don’t blame the filmmakers too much for trying to sugarcoat it a bit.

As Roger Ebert would have said, I give it two thumbs up.

Start following our trades NOW & gain up to 270% per day.

New Diet Taps into Revolutionary Concept to Help Dieters Get Rid Of 20 Pounds in Just 21 Days!