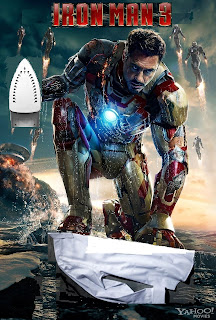 Interestingly (though from the point of Western media outlets, somewhat understandably), the unique suckitude of the Chinese version of Iron Man 3 (to the right is my proposed rendering for the China market one sheet, with the tag line When China said it needed Iron Man, I had no idea they meant...Man with Iron) is being blamed on the Chinese bureaucracy, despite the fact that IM3 is a Disney production, and not a Chinese co-production.

Why Disney did not take the co-production route for Iron Man 3 is something of a mystery; co-production would have entitled Disney to a bigger share of the Chinese box office—25%, according to the Hollywood Reporter.

Since Iron Man 3 is doing record box office in the PRC, a certain chunk of change has been left on the table by Disney.

Apparently the upcoming China angle was presaged in the first Iron Man movie  with a reference—that I missed—to Mandarin’s insidious organization, the Ten Rings, and director Shane Black would be expected to deal with the China theme in this movie, before the franchise ran out of steam.

The Mandarin, the purportedly Chinese supervillain, is the slice of Orientalizing, Fu Manchu style bullshit one would expect from a comic book.  Emphasis on bullshit, from what I can see in Wikipedia (which is a treasure trove of Iron Man information, including a separate entry for the diabolical dragon Fin Fang Foom):

The Mandarin's late father was one of the wealthiest men in pre-revolutionary mainland China (and a descendant of Genghis Khan), while his late mother was an English noblewoman. Their son was born in an unnamed village in mainland China before the Communist revolution. The boy's parents died soon after his birth, and he was raised by his (paternal) aunt, who was embittered against the world and raised him with much the same attitude. Every last bit of the family fortune was spent obsessively training the Mandarin in science and combat, with the result that he was completely broke upon reaching adulthood. Unable to pay the taxes on his ancestral home, the Mandarin was evicted by the government. 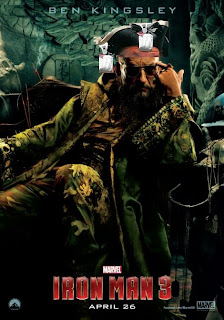 So that’s why US anti-big government activists call themselves the Tea Party.  It’s all because the gummint took that tea-loving Chinaman’s house!  Just because his aunty forgot to file her income taxes for 18 years!

To be honest, I suspect the co-production issue was not a matter of Yellow Peril stereotyping.

Apparently, Mandarin is one of your nobler supervillains, maybe not up there in the 70% right/30% wrong decile occupied by Mao Zedong, but all in all a wise, mighty, honorable, and--in contrast to his aunty--financially astute authoritarian who is perhaps the Communist Party’s secret beau ideal of the perfect Chinese strongman.

And, after all, Marvel, as part of its world-conquering (film) strategy, inserted the Chinese theme several years ago, and in Iron Man 3 came up with a movie the Chinese censors were happy to release to a mainland audience.

No, judging from the description of the comic book Mandarin: The Story of My Life, I suspect that the whole Mandarin/Oriental stereotyping/no co-production angle was viewed as a complex meta exercise by Shane Black, a sort of superhero Being John Malkovich :

In Invincible Iron Man Annual #1 by Matt Fraction, a new updated origin of the Mandarin is offered. Here, the Mandarin kidnaps a young up and coming film producer to tell his life's story. He relates the same story he once told Iron Man in Tales of Suspense of his English noblewoman mother and his schooling at the finest boarding schools in the land.

The director begins to learn that much of what the Mandarin says is contradictory and false with photos from this time staged (it is hinted that the Mandarin had used one of his own rings to make himself believe this tapestry of half truths) and discovers a different tale of the Mandarin's origins: The Mandarin was the son of a opium den prostitute who went on to become a powerful underworld figure before discovering the Ten Rings of Power in an alien craft …

Angered at the Mandarin holding his wife hostage, the director shoots the movie as he wishes not as the Mandarin dictates. The Mandarin denounces this telling of his past as lies and angrily destroys the cinema in which it was being shown, before having the director killed.

Later he regrets murdering the director, noting that he really did love his films.

Good luck trying to explain that to the China Film Bureau.

Better just forgo the co-production bennies, but show the Chinese there’s no hard feelings by helping them cash in on the can’t-miss Iron Man 3 boom with a hacktackular Chinese version.

According to reports, the much-touted Chinese version is actually four minutes of awkward and awkwardly inserted product placement footage, including the Chinese doctor guy awkwardly guzzling some Yili milk.  Perhaps Yili will get better traction from this appearance than it did in Transformers 3 (Chinese engineer guy awkwardly guzzles Yili milk just before he gets killed).

Just to make sure consumers get the message (and Yili gets a decent return on the gigantic chunk of change it presumably threw at Disney and/or the Chinese), there’s an Yili commercial shown prior to the film in Chinese theaters.

Apparently, in the main feature, Yili milk is still only suitable for second-string Oriental talent, not Occidental stars, let alone spandex (or iron)-clad superheroes.  Elsewhere, Yili gets some facetime with the above-the-line talent:

As far as I can tell, the copy reads "It fills one out so one can fight for righteousness!", presumably addressing Yili's target market: anxious mothers who would feed their kids fortified Yili milk so that they are the proper size, either to fight for righteousness or join China's growing ranks of obese children.

Maybe that's why the Avengers seem to be fighting with Yili milk, instead of drinking it.

Order a Sparkling White Smiles Custom Teeth Whitening System online and enjoy BIG SAVINGS!
* 10 shades whiter in days!
* Professional Results Guaranteed.
* As good as your dentist, for a fraction of the cost.
* Same as dentists use.