[Edited this post lightly for clarity/typos after I sent out the e-mail notice.  Be warned!]

My answer: Because he’s a spook.

There has been no end of sniggering from the liberal Colonel Blimps that Snowden chose to reveal his identity in Hong Kong.

As in (from the Twitter feed of a journalist who relentlessly works the "unfree China" side of the street):

Here’s what I think:

Snowden, in addition to his career as an IT grunt, had worked on the covert operations side in Geneva.

He wants to control the circumstances of his exposure and obtain maximum press exposure to shape international perceptions of him and rally support before the legal hammer comes down.

He doesn’t want to take the risk of getting quickly jacked up by the legal system of a nation allied to the United States on any charge, trumped up, plausible, or genuine.

He doesn’t want the local authorities and local spooks working enthusiastically with the US spooks to surveil him, harass him, help make a case against him, and button him up.  He doesn’t want to get rendered.  He would like not to get bumped off.

What countries would a CIA analyst believe to have the lowest level of cooperation with the CIA and the most pervasive counterintelligence capabilities?  Russia maybe.  China maybe.

So he looks at a jurisdiction that a) has a liberal legal system with good protections and process and b) keeps its US spooks on a short leash.

In other words, Hong Kong.

Second, were his revelations timed to coincide with the Sunnylands summit?

I guess so, for maximum hypocrisy exposure (Snowden) and media heat (Greenwald).  My personal feeling is that it is not going to affect US-China cyberbitchslapping too much.  Both sides already have a pretty good idea of each other’s capabilities.  In fact, I would think it would be better for Xi Jinping not to take the Snowden embarrassment as an excuse to take lightly President Obama’s demands.  This is just the sort of situation in which the United States drops the hammer in order to demonstrate that it’s still the biggest bully on the block.

Third, will the PRC arrange for Snowden to be extradited to the United States?

Probably, though I think their inclination will be to let the Hong Kong legal system grind ahead with all deliberate speed, perhaps with a few discrete shoves from behind the scenes, in order to preserve Hong Kong’s reputation for judicial independence.  If President Obama can bring himself to ask really, really nicely, the PRC might resort to some sort of extraordinary intervention.

Fourth, why are Snowden, Greenwald, and the Washington Post receiving anything other than the thanks of a grateful nation for revealing, not the details of individual covert operations, but information on US surveillance capabilities which are known or suspected by most insiders but unknown only to the public at large?

I have no answer for that.

It is a rather disturbing fact that the evolution of 21st century society is driving us into a deeper awareness and appreciation of the work of that famous and famously difficult to understand French philosopher, Michel Foucault.

I will outsource this observation to the excellent Bernard over at Moon of Alabama:

Edward Snowden points to a different danger of such secret data accumulation:

[Snowden] said the [analysts and governments] labored under a false premise that “if a surveillance program produces information of value, it legitimizes it. . . . In one step, we’ve managed to justify the operation of the Panopticon.”

The Panopticon is a architectural concept for a prison where the guards can watch, unseen by the inmates, from a tower in the middle into all cells build in a circle around the tower. It leaves the inmates in a perceived state of permanent surveillance. The French philosopher Michel Foucault described the effect:


Hence the major effect of the Panopticon: to induce in the inmate a state of conscious and permanent visibility that assures the automatic functioning of power. So to arrange things that the surveillance is permanent in its effects, even if it is discontinuous in its action; that the perfection of power should tend to render its actual exercise unnecessary; that this architectural apparatus should be a machine for creating and sustaining a power relation independent of the person who exercises it; in short, that the inmates should be caught up in a power situation of which they are themselves the bearers.

The original Panopticon, like the digital version the NSA is building, takes away all feeling of privacy. Even when one is not watched, knowing that the possibility of being watched is always there, creates uncertainty and leads to self disciplining and self censorship. It is certainly a state the powers that be would like everyone, except themselves, to be in.

Well, I'll add this.  For those of you unfamiliar with concepts of penal architecture, the Panopticon was a proposal by the 18th century philosopher Jeremy Bentham.  No true Panopticons were ever constructed for reasons of technical difficulty.  The nearest thing to a true Panopticon was built in Cuba in the 1920s: 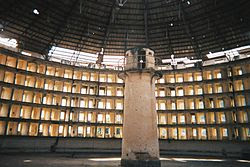 Here is the requisite ironic postscript from Wikipedia:

This objective was extremely difficult to achieve within the constraints of the available technology, which is why Bentham spent so many years reworking his plans. Subsequent 19th-century prison designs enabled the custodians to keep the doors of cells and the outsides of buildings under observation, but not to see the prisoners in their cells. Something close to a realization of Bentham's vision only became possible through 20th-century technological developments – notably closed-circuit television (CCTV) – but these eliminated the need for a specific architectural framework.

What I find interesting is the comparison-contrast with the PRC version of the "Panopticon" surveillance. They've been at it longer and with much more vigor, which has obviously made even the concept of whistle blowing impossible. Ironically, PRC folks seem to feel more free on Weibo and other media which are certainly just as watched. It seems to fly in the face of Bentham's attempts because the inmates (i.e. the PRC citizens) just don't care whether they are observed or not. They seem to adopt a "I won't be the one carted off to jail" mindset.