I owe Paul McCartney an apology

When McCartney’s second solo album, Ram (credited to Paul and Linda McCartney), came out in 1971 I ignored it.

The single that hit big in America, Uncle Albert/Admiral Halsey came across as a lazy pastiche, a collection of bits that McCartney apparently couldn’t resolve into individual songs, or blend into a compelling whole, as he had been able to do with the long medley on Abbey Road.

The song played like a piece of catchy nonsense that, in addition to the inanity of its music-hall tribute Admiral Halsey section, also misappropriated the signature John Lennon echo-y funny-toff voice from Yellow Submarine.

I was also influenced by the campaign of vituperation orchestrated by Rolling Stone magazine (yes, it is amazing to recall that Rolling Stone actually possessed pop/rock cred back in the previous century).


Upon its release, Ram was poorly received by music critics. McCartney was particularly hurt by the harsh reviews − especially as he had attempted to address the points raised in criticism of his earlier album, McCartney, by adopting a more professional approach this time around. In his review for Rolling Stone, Jon Landau called Ram "incredibly inconsequential" and "monumentally irrelevant", and criticised its lack of intensity and energy. He added that it exposes McCartney as having "benefited immensely from collaboration" with the Beatles, particularly John Lennon, who "held the reins in on McCartney's cutsie-pie, florid attempts at pure rock muzak" and kept him from "going off the deep end that leads to an album as emotionally vacuous as Ram".   Playboy accused McCartney of "substituting facility for any real substance", and compared it to "watching someone juggle five guitars: It's fairly impressive, but you keep wondering why he bothers." Robert Christgau, writing in The Village Voice, called it "a bad record, a classic form/content mismatch", and felt that McCartney succumbed to "conspicuous consumption" by overworking himself and obscenely producing a style of music meant to be soft and whimsical. Writing some four years later, Roy Carr and Tony Tyler from NME suggested that "it would be naive to have expected the McCartneys to produce anything other than a mediocre record ... Grisly though this was, McCartney was to sink lower before rescuing his credibility late in 1973."

His fellow ex-Beatles, all of whom were riding high in the critics' favour with their recent releases,were likewise vocal in their negativity. Lennon famously hated the album, dismissing his former songwriting partner's efforts as "muzak to my ears" in his song "How Do You Sleep?". Even the affable Starr told Britain's Melody Maker: "I feel sad about Paul's albums ... I don't think there's one [good] tune on the last one, Ram ... he seems to be going strange."

Lennon and the other Beatles apparently found much to offend them in Ram.  Given the breakup 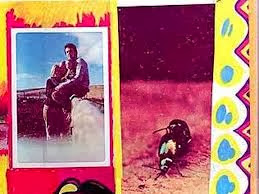 related acrimony (McCartney had sued to officially dissolve the Beatles, destroying the band in order to save it, as he saw it, from the depredations of Allan Klein) and McCartney’s barely suppressed bitterness (the cover art for Ram shows two copulating beetles, indicating how McCartney felt he was being treated by the rest of the band), it is understandable that Lennon camp was totally uninterested in cutting McCartney any slack for some of the oblique jabs that careful and hostile listening detected on the album.

Even so, the disproportionate vitriol over McCartney’s purported anti-Beatle jibes in Ram reminds me of those communist show trials in which the accused’s desperate and disingenuous professions of innocence are never sufficiently abject, and provoke even more bitter condemnation than the original transgression.

Actually, Ram is a profoundly musical and inventive album that, in my opinion, goes interesting and worthwhile places and takes the listener along.

Here’s one of the songs, Dear Boy.  Paul McCartney persuasively claimed that it was written largely as a rebuke to Linda Eastman’s first husband for his blindness in not appreciating what he had in Ms. Eastman.  However, aggrieved Lennonists chose to interpret the song as an assertion of McCartney's supposed musical supremacy in the Beatles.  Modern listeners may be less interested in the supposed triteness (or condescending viciousness) of the sentiment than the awareness that McCartney has his Brian Wilson on and is intent on out-smiling Smile in two minutes and sixteen seconds of impeccable composition, arrangement, and performance.


Once again, my apologies to Paul McCartney, who is undoubtedly languishing in undeserved obscurity and poverty thanks to my failure to give Ram the attention it deserved upon its release.

I posted a comment on this thread which did not appear so I will attempt it again.

I made this comment on youtube on a Ram album discussion and I think it bears repeating so here goes.

The Trash and Bash McCartney brigade led by Jann Wenner and like minded(or weak minded flunkies he employed, followed by other Lennon biased critics in the music press, who bowed at the feet of John Lennon, sided with Lennon in his feud with Paul McCartney after The Beatles break-up, sought to ingratiate themselves with him, by trashing anything and everything McCartney did post break-up, by creating a false narrative and talking points that Paul wrote shit, sang shit, was shit, and that we should always expect shit from Paul...and that John was deep, innovative, creative,artistic, transcendent, genius...pretty much what angry John was spewing in all of his interviews back in 1970,1971. This hurt Paul very deeply and it damaged his career (somewhat) and his reputation for decades,(even to this day in some quarters). Now why would they do this, one has to ask? I'll tell you why.
The break up of The Beatles came as quite a shock, to everybody. And since it was announced publically by McCartney in an innocous promotion of his debut solo album, headlines screamed Paul McCartney Quits The Beatles! He became the face of the break up, he was the villian. Music press was shocked, then angry, and instead of doing their journalistic jobs and digging for information on what actually happened, they sought to blame, degrade and ruin the reputation and career of Paul, based on the drug induced, paranoid rantings of an angry John without even attempting to balance their screed with a Paul's side until months later, and then with a shrill chorus of "LIAR!" as a response to McCartney's point of view. Rancid, amateur, hack journalism at worst.
As for RAM, the music speaks for itself. It is a masterpiece, it was then and it is now. Fans that listened to it back then have always known. It's a newly discovered gem by young fans of today and old Beatles/McCartney fans that were influenced by the music critics back then and skipped it. The music of Ram has stood the test of time. The album was so innovative it sounds just as fresh today as it did back in the day. Music critics of today often wonder what in the hell was going on with then young, supposedly hip, cool music critics back then, to hate McCartney and RAM so much? I'll tell you what was going on.
They, 1970s music critics became the New Establishment. Young men with bitter hearts, with the same agenda they hated the Old Establishment for. They were the gatekeepers, bent on keeping out someone they blamed for killing their religion, The Beatles, and they didn't want Paul McCartney in their snooty, pissy little heaven because their god, John Lennon was mad at Paul, and THAT, for them, was reason enough.