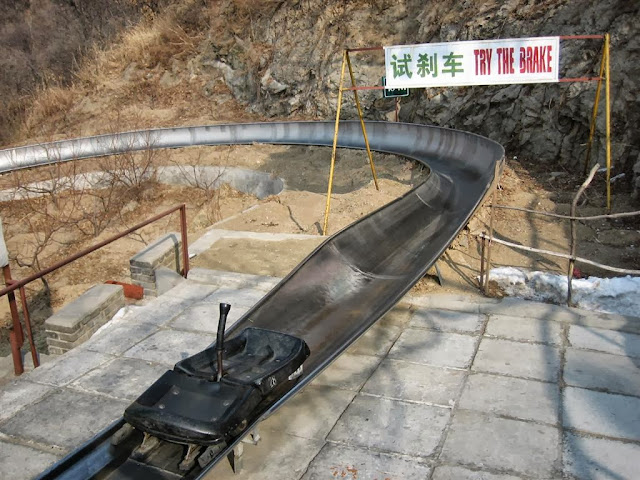 My hometown hoopsters, in Beijing for a series of exhibition games, have been victimized by the “dry toboggan” at Mutianyu Great Wall.  Chris Kaman, whom the Lakers will hope will make Los Angeles forget previous center Dwayne Howard, or at least forgive the local fan and media hostiles who convince Howard to take his talent elsewhere, mushed his finger in a pile-up:

His sled, essentially a wheeled cart with a brake, was rammed from behind by teammate Shawne Williams. Kaman instinctively put out his hand as he saw Williams careening toward him and, well, ouch.
…
"I didn't hit the brake the whole time. Guys on the edge were yelling 'Slow down' and I just kept going," Kaman said. "All of a sudden I catch up to this guy close to the bottom, so now I have to brake. Shawne Williams comes behind me without hitting his brake at all and just smashed right into me."

Per my personal experience, the toboggans at Mutianyu are, from the point of view of physics and momentum and center of gravity, optimized for a human physique more petite than that of an NBA basketball player.

Or, to put it in the words of a lawsuit against an Austrian resort:

Plaintiff, a man of about 110 kilogramme took a dry toboggan ride with his daughter. Even though the toboggan run complied with technical standards and relevant laws, braking efficiency was poor at steep parts if total weight exceeded 120 kilogramme. When arriving at such steep part, plaintiff tried to slow down the toboggan by using the brakes. As he saw no effect he paniced and screamed. The man at the toboggan in front heard the scream and stopped. Few moments later plaintiff's toboggan drove against the one of the man in front and plaintiff was injured severely.

Austrian Supreme Court (OGH) held that even though plaintiff could have had a safe ride despite low braking efficiency, the operating company was liable for the injury caused by plaintiff's panic reaction and improper attempt to assistance by the man in front because of not having warned of limited braking efficiency.

As for me, I found myself exiting my toboggan ahead of schedule, much as Laker Nick Young apparently did per the video available at this link.

I also remember the toboggan concessionaires had positioned personnel on folding chairs at the blind curves of the run.  I don’t think they were able to contribute materially to the safety of the ride.  I do, however, recall their kind solicitude in making sure that I did not remain crumpled in a heap after being thrown from the car, and helping me complete my journey down the hill.  Judging from this recent video, there is a lot more admonitory signage on the attraction these days.


The “dry toboggan” was invented in Europe in order to give ski resorts a summer thrill attraction that might bring tourists onto the mountain for the snowless months.  The  Mutianyu installation was provided by Wiegand of Germany.  China has been very good to Wiegand; they have two dozen installations in China, dating back to the 1990s.  Here’s their website, for those with the interest and cavalier attitude toward physical harm and altitude drop suitable to this sort of installation.
Posted by China Hand at 5:10 PM

I like to visit here for see this wall really this wall is so fantastic.
Great Wall of China

Looking for the Ultimate Dating Website? Join and find your perfect date.