I’m ready to call bullsh*t on the notorious “Red Star of David” anti-Trump meme that has swept the Intertubes. 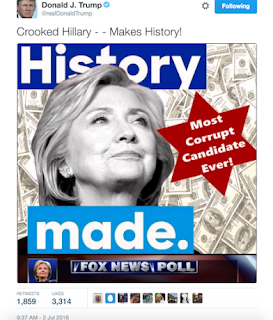 Stars of David are not red (blue border on white field); ghetto stars used by the Nazis were yellow; and the red star, among other things, is the shoulder badge of the US Army’s 6th Infantry Division.  The six-sided star is part of the library of shapes in Microsoft Word and Paint, and it provides a nice big field to insert some derogatory phrasing.

In my version of Word, by the way, the default fill color is blue—Israel blue!—and I had undo the blue and put in the red fill.  Hmmm. 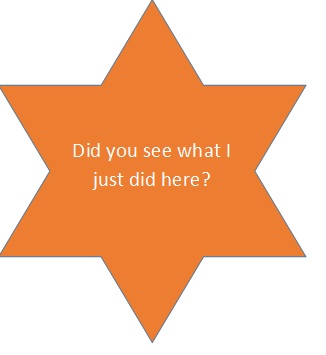 And one really has to wonder if Trump—who presumably has the white nationalist vote sewed up, has a Jewish son-in-law, and is determinedly trying to get into Sheldon Adelson’s wallet with pro-Israel rhetoric at the moment—really decided this was the occasion to make a derogatory anti-Semitic association with Hillary Clinton and her affinity for large helping of cash from corporate and, via the Clinton Foundation, foreign sources, many of which are from the unpopular Gulf/Muslim quadrant.

A VC-funded media operation, Mic, won the Internets on July 3 by finding a cache of /pol/, an “anti-PC” 8chan operation with the offending image.  It subsequently traced the post back to the twitter feed of @FishBoneHead1.  I was not particularly impressed by Mic’s attribution of anti-Semitism along the lines of “Of note is the file name of the photo, HillHistory.jpg, potentially a nod to the Neo-Nazi code HH…”

By the time I got to it, the @FishBoneHead account had been deleted and all I could do was scroll through the mentions for a sense of the milieu.   As far as I could tell, virulently anti-Clinton with a side order of “Obama betraying America to the Muslims”.

No More Mister Nice Blog was able to see @FishBoneHead1 before it disappeared, and his conclusions appear to be similar to mine (with the caveat that some of the anti-Semitic imagery was reportedly scrubbed from the TL prior to deletion):

FishBoneHead1 is a jerk, but he doesn't appear to be a Jew-hating jerk. He just likes making dumb images out of simpleminded right-wing memes, using the most obvious graphic techniques. He probably thought a six-pointed star would accommodate the words better -- if he'd wanted to dog-whistle, the star would have been yellow.

I concur.  So I doubt either @FishBoneHead or Trump were engaged in anti-Semitic dogwhistling with the red star.

I do not agree with the assessment, in other words, of Sam Stein and Sam Levine of the Huffington Post, as summarized in their headline: Donald Trump Launches Blatantly Anti-Semitic Attack Against Hillary Clinton: This is not a dog whistle.  It’s not subtle.

Excuse me.  If it was meant as a dog whistle, Trump would have kept it up, denied the truth, reveled in the publicity, in other words dog whistled as he worked raking in the cash.  Instead he hastily took down the star tweet in a fug of embarrassment, replacing it with a red meatball whose offense to the sensibilities of the Japanese royal family was miraculously ignored. 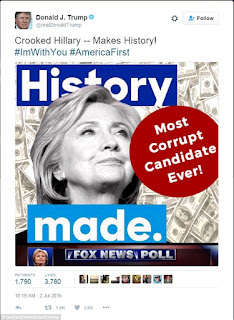 On July 3, Trump also tweeted an encomium to Elie Wiesel, which did not earn him much love with the /pol/ set.

My anti-Semito-skepticism is also fueled by the fact that accusations of anti-Semitism have become the lingua franca of liberal political agitation at home as well as abroad.  The Blairites in the UK’s Labour Party—who have worked hand-in-glove with political consultants in the United States since the Bill Clinton days—mounted a ferocious attack on the purported anti-Semitism of Jeremy Corbyn over a period of months, presumably as part of their “Corbyn coup” scheme.  It recently climaxed with the Guardian bigfooting Corbyn’s report on anti-Semitism in the Labour Party by spuriously claiming that Corbyn had analogized Israel to ISIS.

As to how the pack attack on the red star began, I direct you to this quote from the New York Times on the kerfuffle:

Before the post came down, Josh Schwerin, a spokesman for Mrs. Clinton’s campaign, asked on his personal Twitter account, “Why is there a Star of David?”

Allies of the Clinton campaign “saw their opportunities and they took ‘em” in other words, creating a media firestorm over unlucky clipart choices and, I expect, to their relief managing to distract somewhat from the fact that their candidate had just spent several hours with the FBI discussing her dodgy e-mail server.

Is Trump the active impresario of an anti-Semitic movement?

The evidence seems to indicate otherwise.

The Alt Right movement of deliberately offensive transgressive provocateurs who gave us Gamergate has adopted Trump as its mascot thanks to his cultivation of disgruntled white conservative males, and their web-centric followers provide much of the torrent of on-line anti-Semitic invective unleashed against Jews who, in their estimation, offend against “Daddy Trump”.

But Trump himself relies on xenophobia against Hispanics and Muslims and racially-inflected smears against President Obama to fire up his base.  That’s enough.  He doesn’t need to play the anti-Semite card.

Quite the opposite, I think.

I doubt Trump is particularly grateful to Alt Right for adding “anti-Semite” to his portfolio of epithets, given the historical/Israel/fundraising/media headaches it brings along.  The section of electorate for whom “he’s going down the path of Hitler” is a matter of fear and execration is pretty big…as is the benefit to Clinton of successfully associating Trump with the ultimate political taboo of Fascism.

To serious proponents of Fascism and white supremacy who key on the alleged Jewish menace, Trump is not Hitler but he’ll have to do until a real Hitler comes along, as Dylan Matthews wrote for Vox:

The leading actual neoreactionaries are not fans of Donald Trump. "Trump appears to have no ideology at all and very little historical/intellectual awareness of his context," Moldbug — who now just goes by his birth name, Curtis Yarvin — writes in an email.

Yarvin apparently would like to see Elon Musk or Jeff Bezos take the reins, by the way.  Looking forward to the Washington Post coverage of that particular movement.

And reporters have yet to find the Holy Grail—Trump making explicitly bigoted remarks about Jews.

However, Trumpland is a particularly hostile space for Jewish intellectuals and journalists if they criticize Trump.  In fact, members of the Alt Right crowd (who also congregate on the 8chan message boards that posted the offending red star graphic) delight in threatening and intimidating targeted Jewish journalists, to the point they fear for their lives, as WNYC reported:

Mandel [a journalist critical of Trump who writes for the Forward & other publications] estimates she has faced thousands of anti-Semitic messages online, mostly from self-identified white nationalists who are passionate Trump supporters -- as made clear by their exhortations to "make America great again" and the Trump imagery in their user profiles. The messages she has received ("Die, you deserve to be in an oven," for example) are tame compared to the pictures (Mandel's face superimposed on that of a Holocaust victim).
…
Mandel estimated that she has blocked 1,000 users on Twitter who have gone after her.
…
So a couple of months ago Mandel packed up the kids and went to the gun shop. "...And I'm like, 'I need a gun because people are mean to me on the Internet,'" Mandel remembered. "And like, yes, that's true, but people are publishing my phone number and address and I've written for some of the most prominent places on the Internet this election season, and that sort of makes you a target."
Mandel got her gun and alerted local police, who now monitor her home. Mandel also wrote a piece for the Jewish Forward: "My Trump Tweets Earned Me So Many Anti-Semitic Haters That I Bought A Gun." It went viral.


Julia Ioffe and Jonathan Weisman of the NY Times got similar attention from pro-Trump anti-Semites.  Felix Salmon also got the treatment for his criticisms of Brexit (a Trump fave), as I recall.  There are others.

Don’t try to discount the impact by parsing the authenticity of the threats.  The fear is real.  So is the anger.

NY Magazine ran a very useful piece by Jesse Singal on the association of Trumpism with racial bigotry.  It focused on Ben Shapiro, a right wing media figure who left Breitbart, a major platform for Trump, and endured the full range of anti-Semitic castigation as a result.

Shapiro doesn’t spend much time parsing the distinction between “real” and “trolling” online anti-Semitism. “[Yiannopoulos’s—the media star of the Alt Right] argument seems to be that an alt-right person tweeting a gas chamber at me in a way that’s indistinguishable from David Duke tweeting a gas chamber at me, or an alt-right person calling me a cuck Jewish supremacist, versus David Duke doing the same thing — it’s my responsibility to attempt to distinguish between the two and read into their mind a distinction that simply doesn’t exist in objective reality.”

Awareness of popular anti-Semitism constellating around Trump—and the unnerving litany of abuse and threats unleashed against Jewish journalists with Trump not making any serious effort to acknowledge and disavow it—permeates coverage of his campaign, in my opinion.

The Clinton campaign obviously regards the allegations of Trump anti-Semitism as campaign gold, accusations that place Trump beyond the moral pale, stop him in his tracks, and force him to respond. Since Trump is persona non grata among many mainstream conservative as well as liberal journalists (it’s also a fact that some of the most conspicuous victims of the Alt Right jihad have been conservative Jewish journalists), the media appears happy to oblige, even when innuendo, extrapolation, speculation, and association have to bear an inordinate share of the evidentiary burden.

So the red star story, despite its dubious circumstances and context, gets the four-alarm-fire treatment.

I’m in the minority, I’m sure, but I don’t think bad journalism in a good cause is a good thing.

Looking for the Ultimate Dating Site? Join and find your perfect match.

Get professional trading signals delivered to your mobile phone every day.

Follow our signals right now & profit up to 270% per day.

Ever wanted to get free Google+ Circles?
Did you know you can get these ON AUTO-PILOT & ABSOLUTELY FOR FREE by getting an account on Like 4 Like?

BlueHost is definitely the best hosting company with plans for any hosting needs.