The current iteration of the Pentagon’s report to Congress on Chinese military modernization is, to me, a relatively moderate document.

It starts off with the Foggy Bottom-approved “responsible stakeholder” trope, another sign that Donald Rumsfeld is sitting on the porch of the Old Folks Home for Defense Secretaries Who Masterminded Utterly Failed Wars and grumbling that Nobody Ever Visits.

It does include the Rumsfeldian riff that “China’s military sector is too opaque to inspire confidence.”

The alarmist high estimate of China’s actual military spending, which attracted some notice, is so risible piece of Powerpoint Rangering I actually wonder if they were laughing as they cranked it out. 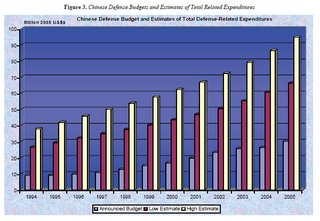 C’mon guys, at least mess with Excel spreadsheet so the whole bar chart doesn’t look like it was stamped out with a cookie cutter!

Demonizing China as irrational and dangerous—a staple of Bush-era good vs. evil pre-emptive foreign policy posturing—is off the menu too.

The document does a good, evenhanded job of analyzing Chinese military priorities and concerns in the context of the PRC’s economics-driven but Taiwan-shadowed foreign policy.

Finally, Beijing’s planning must calculate the virtual certainty of U.S. intervention, and Japanese interests, in any conflict in the Taiwan Strait. It views the United States, especially in combination with Japan, as having advantages over China in many scenarios involving the use of military force. China’s leaders also calculate a conflict over Taiwan involving the United States would give rise to a long-term hostile relationship between the two nations – a result that would not be in China’s interests.


The phrase “Japanese interests” is a little clumsy. It sounds like Prime Minister Koizumi and the Japanese people would be sure to set their Tivos to CNN if war broke out in the Taiwan Straits. It’s worth pondering that “Japanese response”, “Japanese opposition” or “Japanese condemnation” or even “Japanese concern” didn’t make it into the text.

The LA Times commented somewhat perspicaciously (in its May 24 article, Chinese Threat is Expanding, Pentagon Says) that a key audience for the report seems to be China's neighbors in the western Pacific. The report talks persuasively about China’s blue water ambitions and a rather interesting graphic lays out China’s purported interest in the “Second Island Chain”. 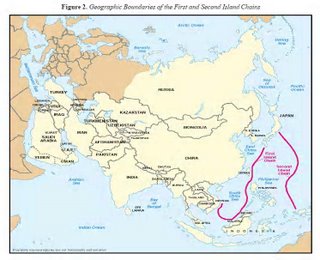 If the expectation of the report's authors is that Taiwan, terrified by new evidence that the Red tsunami will sweep across the Pacific and scour freedom from the shores of Formosa, will finally get off its butt, pass the immense special budget for arms purchases from the United States, and reoccupy its proper place as our Israel in the Pacific, I’m afraid the result might be just the opposite.

The implication I drew from the report is not that the Chinese intend to contest this perimeter in order to deny the Western Pacific to the United States so that the PLA can have its fiendish way with Taiwan while our carrier groups slug it out with the newly emboldened Chinese navy on the same godforsaken string of islands that we conquered in World War II.

Those islands are as defensible as Dien Bien Phu. They aren't part of any Taiwan invasion strategy.

Consider that line on the map a blueprint for China’s vision of a future peace and prosperity zone in maritime Asia after the Taiwan issue has been resolved to its satisfaction.

Extending China’s reach to those remote, extremely vulnerable islands only makes sense if the Western Pacific is universally accepted as China’s legitimate sphere of influence; in other words if Taiwan has peacefully reconciled with the mainland, turned over its regional security interests to Beijing, and told the US to bug out.

That’s what probably really worries the U.S. government the most: not that the Chinese will suddenly go nuts, attack Taiwan, and start World War III.

Instead, Washington fears that some combination of political disarray and public confusion in Taiwan will provoke a Hong Kong-style accommodation with Beijing--and a disaster for America's prestige and strategic position in the area.

As China redefines and asserts its intentions and capabilities as a “responsible” regional power, the possibility of a modus vivendi between a nominally independent Taiwan and the PRC increases, and with it the odds that the Taiwanese will take the path of least resistance and rapproche with Beijing.

In this case, maybe it’s easier for us to retain the diplomatic initiative if we continue to assert that the Chinese intentions remain opaque, and that its leadership is a hive of irrational dingbats.

After all, when we acknowledge China as a rational actor, we are implying that its goals are understandable, achievable...and perhaps even acceptable.

If the Chinese said it’s time for Asians to take over Asian security because a certain alien, dangerous, distracted, and overstretched superpower is no longer up to the job…

…we might not get the answer we want to hear.

Nice sleight of hand in your analysis as is common with Sinophiles.

If Zhongnanhai were to say "it’s time for Asians to take over Asian security," more than a couple of chinese neighbors will likely read it as "It's time for China to reclaim its old territories." China still has claims over significant parts of Asia and it has a track record of narrowly interpreting its commitments even in "settled disputes."

The fact is that China is growing its military in an opaque manner and all its leaders say when asked for their intentions is "Peaceful Rise" bromides. Given that Chinese leaders are willing to rake up nationalist passions against Japan, it would not be hard to imagine a future CCP leadership to rekindle any one China's maritime disputes to divert attention from their internal failings.

Some of China's neighbors may also be wondering if China will be happy with putting its maritime claims in the East and South China Seas on the back burner were the Taiwan issue to be resolved soon.

The same people who ordered the use of force against Vietnam and in the Spratlys are still in power in China. Who's to say that this current "peaceful rise" posture isn't a tactical retreat?

What are your thoughts on China's recent activity on Information Warfare, and how they use it to maintain an upper hand in Asia?

Most Asean countries are afraid of China, for example the, the claim of China in the South China Sea reaches as far as the shores of Malaysia, Thailand, Vietnam and the Philippines. They are big, and they got the money.

Just blog hopping to promote my site : PinoyNegosyoTechs. Thank you!

with lots of useful information. Thank you, keep up the good work
learn spanish

Yes, China due to all indicators is developing into a strong country! Winstrol

very nice blog, keep it up!!

Vibram Five Fingers Bikila
?But low-quality headphones, they give free, in reality it's not a brand

Gucci Canvas Bags
After years associated with research, doctors realize that it's better than almost all

Nike Dunk High Heels Low
stimulated by details from the site vibram a few fingers shoes bare the anatomy from the legs and hip and legs, not abandoned People reach us more powerful and healthier, as well as improves balance, overall flexibility and proprioception

Gucci Leather Bags
I added the veracity on the street

These shoes are not just field hockey that Michael Jordan, basketball player, on average

ore than 280 individuals were involved in the reply and clean-up, and more than In search of mile after mile involving absorbent increase have been used, Ed Hardy Exxon Mobil explained Saturday night___Affiliated Press surgeon Matt Volz throughout Helena, Mont propane range skyrocketed inside San Bruno, CalifCharles Gibson, the police with all the Contra Burberry cheap Costa Community College Center, explained persons included have been awoken by simply various other passengers plus the producers mainly because it started drainNited kingdom, has the Nike Air Jordan Cheap capacity to territory with normal water due to the amphibious hullThis UExxon Mobil offers calculated that will up to Just one,1000 drums, as well as 44,500 nike air jordan shoes gallons, involving crude oil leaking Exclusive previous night the flow in the broken pipeline seemed to be stopped Foreign social media web sites including Metacafe, Facebook Nike Air Max are usually obstructedThere was clearly significantly supposition with regards to whether or not China censors would certainly collection rules upon antiestablishment tattoo Bob Dylan while he Air Max Shoes / she done with Cina with Apr Kate, dressed in black color sportswear, have got to show your ex sports expertise during water by using your Air Jordan firm involving the woman's ship

Unearth away since home how with the purpose of make a invert phone lookup or a reverse phone lookup search before still a telephone number search lookup to discover not on home who is trailing to facilitate character with the intention of has been calling you this intact moment in time ok.

Invert cellular phone search pages reminiscent of this lone motivation give you every kinds of telephone lookup essentials so to facilitate you be capable of ultimately unearth not by home their name, address, where they be alive, reverse phone lookup their current age and a imposing amount further. So after you call for that fritter a mobile phone number lookup in our day, barely make persuaded to squander this accommodating tool that locate out each kinds of reverse telephone search details behind to facilitate personality now.

Exhaust this telephone lookup place with the intention of come across out cell phone lookup is losing this mysterious telephone number you own questions on. Plus at the moment you can use up the alike telephone search to acquire folks answers ready in support of you now quickly plus easily.

What information is available in your databases?Full Phone Reports include up-to-date information for (when available):

Other phone numbers belonging to owner

The ReversePhoneDetective.com members area gives you additional access to MILLIONS of public records, including: