A Tale of Two Hajs 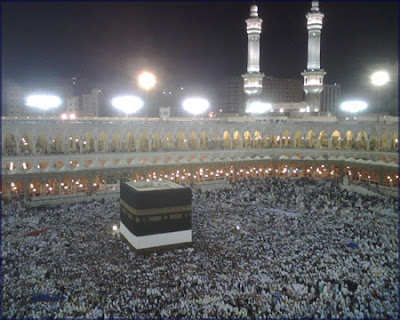 One happened, the other didn’t.
Together, they shed some light on the nature of Saudi Arabia’s involvement in Middle East affairs.
The first was something of a foreign affairs bombshell: Saudi Arabia’s invitation to Iran’s President Ahmadinejad to join this year’s haj...an invitation that Ahmadinejad accepted with alacrity.
From the Teheran Times:
Saudi King Abdullah invited Ahmadinejad to attend the annual pilgrimage when he participated in the Persian Gulf Cooperation Council (PGCC) summit in Doha on November 30. It is the first time that an Iranian president is formally invited to attend the Hajj pilgrimage.
The standard narrative in America is that Sunni Saudi Arabia and Shi’ite Iran are implacable opponents, using their oil revenues to fuel a battle for hegemony in the Middle East.
Well, maybe not.
Nevertheless, Muslims and their quaint but icky and intimidating rituals—as well as the possibility for normalized relations between Iran and any pro-Western state—are so far from the U.S. consciousness that the confusing factor of a haj olive branch from Saudi Arabia to Iran—and its acceptance--hasn’t been adequately covered in the U.S. press.
It’s all over the Middle East news services, of course, and in the U.K. the Beeb, indeed, took note:
An official said the invitation was an important event in Saudi-Iranian ties.
"It is the first time in the history of relations between Iran and Saudi Arabia that the king of this country invites a president of the Islamic republic to make the pilgrimage to Mecca," said presidential aide Ali Akbar Javanfekr.
Since Stratfor and I agree, I will quote from them:
Given the ethnic, sectarian and geopolitical tensions between the two nations, a Saudi monarch inviting an Iranian head of state to make the Hajj is a major development. ... Since the Saudis are conferring an honor upon the Iranians that would not have happened unless the two sides had reached -- or are close to reaching -- a modus vivendi on Iraq and other issues, Ahmadinejad's trip represents a sort of political Hajj.
The analysis makes some good points about Iran’s promising efforts—with apparent U.S. acquiescence--to achieve recognition as a regional power with legitimate as well as significant interests in the Middle East.
The only U.S. outlet that seemed to take notice of this major event in Middle East affairs was the Christian Science Monitor.
The subtitle of its report--Are US Arab allies playing 'good cop' with Ahmadinejad to US 'bad cop'?--indicates to me that the Monitor is regurgitating the line planted courtesy of Condoleezza Rice and the realist foreign policy team, meant to obfuscate the fundamental realignment of Middle East affairs that is taking place and provide political cover by claiming that we are merely pursuing the traditional route of confrontation with Iran in new, skillful, and inexpressibly subtle ways.

Whether the Saudis are leading a paralyzed U.S. foreign policy establishment (my opinion) or following an enlightened U.S. realpolitik line on Iran policy is still an open question, but undoubtedly the Saudis are energetically pursuing rapprochement with Teheran...and Teheran is responding.
The second haj invitation was more of a damp squib.
Saudi Arabia’s ambassador visited deposed Supreme Court chief justice Iftikhar Chaudhry at his residence (where he’s under house arrest) to invite him to join the haj.
Chaudhry firmly declined:
ISLAMABAD, Dec 7: Saudi Ambassador Ali Awadh Al-Asseri met deposed Chief Justice Iftikhar Mohammad Chaudhry at his heavily-guarded official residence here on Friday. Justice Iftikhar has been under house arrest since the imposition of emergency on Nov 3.

Although there was no official word on the deposed chief justice’s first meeting with a foreign diplomat, there were rumours that the ambassador had delivered a message from the government with an offer that he would be duly accommodated if he withdrew the demand for reinstating the judges who had not taken the oath under the Provisional Constitution Order.

According to a source close to Justice Iftikhar’s family, during the hour-long meeting, the Saudi envoy also extended an invitation to him to perform Haj which the latter politely declined, saying that his presence in the country was necessary in the current situation.
Political observers are attaching great significance to the meeting, keeping in view the reported role played by the Saudi government in facilitating the return of Nawaz Sharif to Pakistan.

Mr Sharif and Benazir Bhutto, it may be mentioned, had not been allowed to meet the deposed chief justice.
Chaudhry is the individual at the heart of Pakistan’s judge-and-lawyer driven democracy movement—as opposed to the faux democratic hackery known as the January 8 parliamentary elections being conducted by Pervez Musharraf with the enthusiastic participation of Benazir Bhutto and Nawaz Sharif and under the eye of the United States.
The most blatant and fundamental pieces of extralegal flummery to date in Pakistan have been Musharraf’s attempt to imprison Chaudhry on trumped-up charges earlier this year and, when that didn’t work, Mush’s effort to remove, under the guise of a state of national emergency, both Chaudhry and the activist and pro-democracy Supreme Court he led--just as it was poised to disallow Musharraf's election back in November (Musharraf, in violation of the constitution, had run for his second term as president while as a uniformed officer).
Letting Musharraf keep the presidency he won illegally is critical to the deal as understood by Musharraf, Bhutto, and the United States, and so is turning a blind eye toward the rape of the supreme court and a cocking a deaf ear toward the calls that the deposed judges be reinstated.
It was assumed that the Saudis were trying use a haj to sweettalk or armtwist Chaudhry into abandoning his uncompromising stance on Musharraf’s illegal presidency, and forestall an overall upsetting of the political applecart by the intransigent judiciary.
Some quarters saw the invitation simply as a gift to Musharraf and a way out of the constitutional and legal dilemma he clumsily constructed for himself.
Others saw the invite giving Saudi Arabia’s favorite, Nawaz Sharif a way out of the corner he has painted himself into-- Sharif has staked out a (relatively) extreme position, insisting on restoration of the judiciary—and fully re-enter into Pakistan’s political life after the parliamentary elections.
In any case, the invitation was roundly condemned as an example of Saudi interference in Pakistan’s internal affairs.
Whatever the motivation, the invitation didn’t take, seemingly establishing Pakistan’s secular, middle-class democratic movement outside the conservative Muslim discourse Saudi Arabia prefers, and demonstrating the awkward and dangerous disconnect between Pakistan’s corrupted political process and the increasingly militant and alienated democratic movement.
Dawn reported:
According to the source, Justice Iftikhar told the Saudi ambassador that he considered himself the rightful chief justice and the first thing he would do at the end of his detention would be to go to and sit in the Supreme Court. He said that he was ready to render any sacrifice or to wage struggle for the just cause of independence of the judiciary and restoration of the pre-PCO judiciary. Despite all the difficulties, the chief justice said, judges and lawyers would not abandon their struggle for independence of the judiciary.
Middle East security policy is undergoing a major realignment.
Whether it’s driven by U.S. realpolitik, Saudi Arabia’s desire to move beyond the rhetoric of the global war on terror to a doctrine based on conservative Muslim-oriented regimes distancing themselves from the U.S. and therefore (hopefully) more stable, or inchoate non-aligned democratization remains to be seen.
But in any case, Saudi Arabia’s haj diplomacy may be recognized as a turning point.
Photo from Sri Lanka Daily News
Posted by China Hand at 10:06 PM

Many thanks for your personal sharing. We experience more than happy about that. You should also consider their finest game titles with our free currently to find the sense of exciting that brings.
juegos friv ol

Nice! thank you so much! Thank you for sharing. Your blog posts are more interesting and informative. I think there are many people like and visit it regularly, including me.