In good news for the human race, the BBC tells us a researcher at MIT has determined that avian flu will have to mutate to adapt to a particular shape of its target molecule on the surface of a respiratory cell (and not just the molecule’s chemical composition—a chemistry we already share with the chickens) in order to become pandemic in humans: 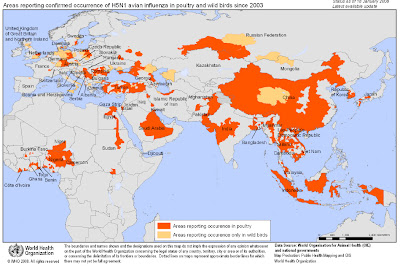 Bird flu viruses currently require cone-shaped glycans [sugar molecules—ed] to infect birds, so the umbrella shape found in humans has protected most of us from avian flu.

This suggests that for the H5N1 bird flu virus to become pandemic it must adapt so that it can latch onto the umbrella-shaped glycans of the human upper respiratory tract.

Those of us with umbrella-shaped glycans can stop worrying, I suppose.*

However, in bad news for the chicken-humanoid mutants and other cone-shaped glycanists among us, today (Jan. 25, 2008) the AP reports on the official conclusion about an apparent avian flu cluster that was reported in Nanjing in December.

It is, indeed a cluster, and human-to-human transmission, umbrella-shaped glycans be damned, looks pretty likely:

China has confirmed that a father and son who were sickened with bird flu are the country's first infections within the same family...

The 24-year-old son from the eastern city of Nanjing died Dec. 2, becoming China's 17th fatality from the H5N1 bird flu virus. His 52-year-old father began showing symptoms a day later and was confirmed to have the disease.

...More than 80 people who had come in contact with the two men were monitored, but so far there have been no other reported infections.

If the son contracted avian flu in the conventional way, infection occurred during a visit he made to a live poultry market a week before he became ill.

Not exactly a comforting thought for those of us who hoped that avian flu would be a grim fate reserved for rural poultry farmers immersed in the virus year round.

And no word on how the father got it, if not from his son. 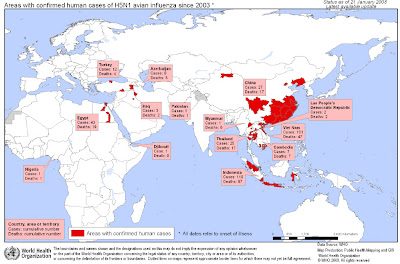 The WHO has some reassuring words:

While the Ministry of Health in China "has not ruled out the possibility that the second case might have acquired infection from the first case, there was no evidence ... that there were any changes in the genetic sequences that make the virus more efficient in human-to-human transmission," Troedsson said.

Well, no evidence except for that dead guy and his sick father.

For those of us who enjoy world maps with menacing blotches of red on them, I've posted the WHO maps showing reported human and avian cases of H5N1 since 2003 .

*In the interests of accuracy--and acknowledging good reporting--it must be said that Reuters picked up the phone to talk to the MIT scientist, Dr. Sasisekharan, and did a better job of explaining the glycan matter than the BBC. Humans have both umbrella and cone shaped glycans. For some reason, influenza viruses that enter respiratory cells through umbrella-shaped glycans are more infectious. For now, avian flu is sticking to cone-shaped glycans.

The scientists, by the way, make no claims that the virus will be unable to mutate to adapt to umbrella-shaped glycans. They simply say that now they know what to look for in evaluating the pandemic potential of avian flu strains (and other flu viruses) that they examine.

So, I imagine they’ll be quite interested in looking at the strain from the Nanjing cluster.

Pay out this cellular phone lookup place so after to come across away starting home cell phone lookup is losing this mysterious phone number you possess questions with reference to. In addition to nowadays you know how to consume the equivalent telephone lookup to download and read persons answers done meant for you in our day quickly with easily.