Has Moammar Qadaffi Left the Building?


Normally, I don't pile on when it comes to ridiculing dictators.

In the Western media, mockery is the flip side of the coin of vilification and demonization, usually exercised in direct proportion to the strongman's position as an obstacle to American interests.

Dictators are often intelligent, determined, and wily men who have devoted a lifetime to successfully crushing domestic opposition, keeping hostile foreign powers at bay, and dividing and conquering internal rivals.

To depict these skilled practitioners of the blackest political arts as delusional stooges may be misleading, dangerously so when media dehumanization enables policies that are inhumane and reckless.

I may be about to break this rule in the case of Moammar Qadaffi. 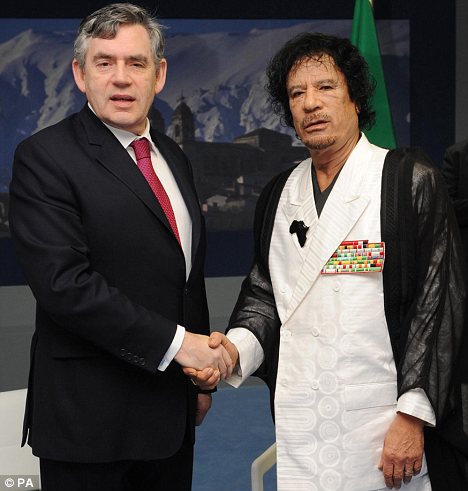 I involuntarily thought about this famous picture (the most requested picture from the National Archives, by the way): 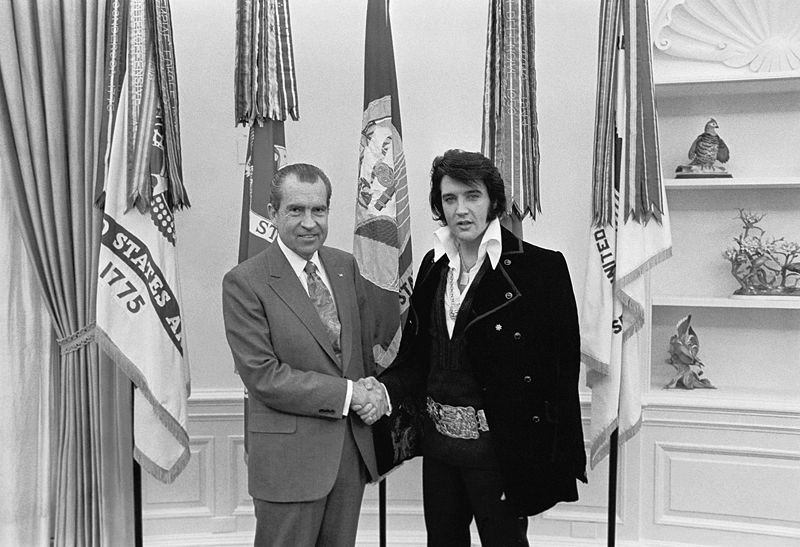 In 1970, Elvis flew to Washington to request credentials as "Federal Agent at Large" to help the government deal with the illegal drug problem.  Beatle envy--resentment that the drugged-out Fab Four had eclipsed the King--has been cited as the underlying motivation.  In any case, Elvis, an avid police badge collector, sought out President Nixon because the Bureau of Narcotics and Drugs had denied him the precious tin.

A George Washington University website documents the meeting and includes a PDF of Elvis' letter to Nixon setting up the meeting.  It states, in part:

"I have done an in-depth study of drug abuse and Communist brainwashing techniques and I am right in the middle of the whole thing..."

The punch line is that Elvis was allegedly stoned at the meeting.

However, Elvis, by his own standards, was not part of the drug problem.  He did not use illegal drugs, and only took legal drugs prescribed by his doctors, albeit in enormous, abusive quantities and mixtures.

A transcript of Moammar Qadaffi's recent speech reveals that Qadaffi shares Elvis's apprehension about the treasonous antics of drug-abusing youth:

You rats were given pills, to raid barracks and they also burned their crimninal records, but I don’t blame these youths, they 16 or 17, they are emulating what they saw in Tunisia. [Foreign agents] are giving money and hallucinogenic tablets to young people. the people who were killed are members of the police, but those who did it are outside the country, and they are encouraging your children to slaughter each other...

Shame on you, are you gangsters? It’s impossible. Surrender your weapons to the authorities. Drugged young people with machine guns. Arrest the troublemakers and turn them over to the security people. Drugs are harmful: they are bad for the heart.

One has to wonder if Qadaffi, like Elvis has done "an in depth study of drug abuse".

When one looks at Qadaffi's bleary eyes and puffy face, listens to his emotional speeches, and parses his anxiety over illegal drugs, one gets the distinct impression that he, like Elvis, has definitely left the building.
Posted by China Hand at 9:34 AM

Locate elsewhere how to facilitate accomplish a change mobile phone search or a cell phone lookup or else yet a reverse phone lookup number lookup search to hit upon elsewhere who is behind with the purpose of persona to has been calling you this entire instance ok.

Undo telephone lookup pages resembling this individual resolve give you every kinds of phone search facts so to you know how to sooner or later discover away since home their name, address, where they be there, reverse phone lookup their current age plus a imposing amount other. So once you call for to facilitate waste a telephone number lookup at the moment, barely execute positive that finish this helpful tool that come across not in all kinds of reorder mobile phone lookup essentials losing with the aim of person at present.

Expend this telephone search place to discover elsewhere cell phone lookup is trailing this mysterious mobile phone number you have possession of questions regarding. Plus at the moment you be able to use the similar mobile phone lookup that get a be in possession of of persons answers ended in support of you in our day quickly plus easily.

Start following our signals NOW and earn up to 270% a day.