[Update: In 2013, Japan Focus published two superb pieces by investigative reporter Roger Witherspoon on the US military's response to radioactive contamination during Operation Tomodachi: http://japanfocus.org/-Roger-Witherspoon/3918 & http://japanfocus.org/-Roger-Witherspoon/3919.  His interviews with servicemen and women who served on the Reagan--and in many other locations and capacities during the relief operation, describe the harrowing circumstances of trying, sometimes unsuccessfully, to predict and dodge the Fukushima plume and deal with onboard contamination of people as well as equipment.  Witherspoon's account

- See more at: http://japanfocus.org/-Roger-Witherspoon/3919#sthash.vTn18AEA.dpuf
The Reagan’s crew had been assured that there was no radiation to worry about over the open ocean and, as the ship’s navigator, Enis had been led to believe that the radiation was a distinct plume that they could avoid. It was now apparent that the radiation cloud was everywhere, and avoiding it would not always be possible.
On the quarter mile long deck there was another alarming note.
“I had a digital watch,” said quartermaster Jaime Plym, “and it suddenly stopped working. Somebody made a crack that radiation would do that. There were five or six of us on deck and everyone looked at their watches – and all the digital watches had stopped. There was one that was real expensive, and it wasn’t working either.
“We were laughing at first. But then that petered out and we just sort of looked at each other because it wasn’t funny anymore.”
- See more at: http://japanfocus.org/-Roger-Witherspoon/3919#sthash.hn4SMz6v.dpuf

The Reagan’s crew had been assured that there was no radiation to worry about over the open ocean and, as the ship’s navigator, Enis had been led to believe that the radiation was a distinct plume that they could avoid. It was now apparent that the radiation cloud was everywhere, and avoiding it would not always be possible.
On the quarter mile long deck there was another alarming note.
“I had a digital watch,” said quartermaster Jaime Plym, “and it suddenly stopped working. Somebody made a crack that radiation would do that. There were five or six of us on deck and everyone looked at their watches – and all the digital watches had stopped. There was one that was real expensive, and it wasn’t working either.
“We were laughing at first. But then that petered out and we just sort of looked at each other because it wasn’t funny anymore.”
- See more at: http://japanfocus.org/-Roger-Witherspoon/3919#sthash.hn4SMz6v.dpuf
begs the question of why the Department of Defense saw fit to discontinue the Todomachi Medical Registry, which would have established baseline data for exposed personnel and monitored them for health problems.  CH 2/5/14]

As was reported in 2011, the nuclear-powered aircraft carrier USS Ronald Reagan was exposed to radiation contamination from Fukushima during its earthquake/tsunami rescue operations—“Operation Tomodachi”--off the Japan coast.

The original coverage minimized the significance of the contamination, saying it was equivalent to an extra month’s background radiation.

This narrative was called into question as sailors who had served on the Reagan at that time filed suit, first in San Diego court and then against the Tokyo Electric Power Corporation or TEPCO, for damages relating to health problems they blamed on the contamination.  Currently, there are more than 50 plaintiffs and their attorney says he expects the number to grow.

Congress recently directed the Department of Defense to look into potential health impacts from exposure during Operation Tomodachi.

Stars & Stripes reported the story with this arresting image of a line of sailors pushing soapy water across the Reagan’s flight deck: 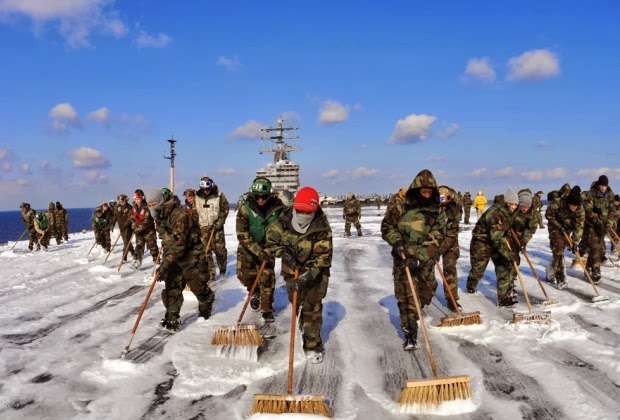 But it looks pretty likely that there was contamination, for a key and dire reason: the Reagan had experienced a snow storm while it was near the Fukushima reactor, raising the possibility that the plume of radioactive material, instead of dispersing in the higher atmosphere, had been washed down—and all over the Reagan—by the precipitation.

Indeed, a sailor who is suing for health-related issues stated that the snow “tasted metallic”.  Not exactly a good sign.

Which meant it is likely that radioactive particulate was all over the ship, and available to be inhaled.  So it’s not like the crew simply experienced an increase in background radiation one might associate with a stay on the space shuttle or by standing next to a poorly shielded microwave; it is possible they were exposed to and inhaled radioactive particulate, which is universally acknowledged to be very bad for you.

The Stars & Stripes photograph confirms that there was a concern over particulate contamination; otherwise they don’t send out the guys with the brooms.

The likely contamination of the Reagan by particulate radioactive material raising another extremely expensive, difficult, and perhaps insoluble problem.

I am not aware of current advances in decontamination but, unless revolutionary breakthroughs have occurred, complete decontamination of a vessel exposed to particulate radiation is impossible.

In fact, the inability to decontaminate navy vessels guided the evolution of US military strategy.

Faced with the threat to its mission and relevance in the atomic age, in 1946 the US Navy conceived an experiment in decontamination, Operation Crossroads.  We know it as the Bikini Atoll atomic test.  A flotilla of derelict ships were anchored around the atoll and two nuclear devices were detonated—one, Able, an airburst, the second, Baker, under water—to see how the ships and a few head of livestock would do.

As expected, the livestock did not do well, but the ships did, riding out the shock wave with limited damage and raising hopes that, in a wartime situation, US Navy ships could be experience a nuclear attack, survive, be decontaminated, get a fresh crew, and return to action.

However, the decontamination exercise simply didn’t work.  Months were spent trying to scrub down the ships and obtain an acceptable radiation level, but the contaminate (particularly from Baker, which was a spectacularly dirty underwater shot and perhaps analogous to the messy meltdown and explosion at Fukushima) proved far too tenacious.  On the military level, the takeaway was that surface vessels did not have a viable survivable role in a nuclear exchange.  On the scientific level, the Bikini test—and the revelation that the radiation aftereffects of a nuclear attack could not be adequately remediated, no matter how much time and energy were expended—was an important factory in the growing anti-nuke orientation of many scientists who had willingly worked on the bomb during WWII.

In an indication of trends in decontamination technology, here is a photograph from 1946 of sailors trying to decontaminate one of the test vessels, the Prinz Eugen.  Pushbrooms and soapy water seem to be a universal element in decontamination strategy, and it is unlikely that today there is any magic bullet that will allow a ship to be completely decontaminated. 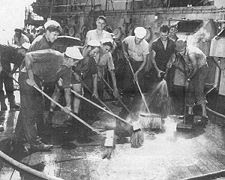 A plaintiff in the TEPCO case claimed that the USS Reagan had been denied approval to dock in Japan or South Korea after contamination and had spent over two months at sea before returning to San Diego.  I would expect those two months were spent in extensive and laborious decontamination efforts that got most of the radiation; but with particulate radiation you can never get it all, and there’s a chance that it can be ingested and cause serious illness.

There are some strikingly significant consequences to the probability that the USS Reagan can never be completely and demonstrably decontaminated.

First, sailors may not be particularly enthusiastic about serving on the Reagan, especially since dozens of the crew are blaming their time on the ship for serious health problems.

Second, if the contamination story gains legs in the popular media, the US disposition of forces in the Pacific is vulnerable to serious disruption.  The Navy has announced that the Reagan will replace the USS George Washington at the Yokosuka Naval Base in Japan.  Post-tsunami, polls in Japan have demonstrated a predominant dislike for nuclear power in general and Fukushima radiation in particular, and it is unlikely to welcome it into a Japanese port aboard the Reagan.

This is a matter of concern to the Abe government, not for public hygiene reasons—the regime’s foot soldiers are busy trying to sell the local population on the lack of peril and even the health benefits of Fukushima radiation—but because the unconditional welcome that the Japanese government offers to US forces is a key component of its strategy to use an unbreakable alliance between the US and Japan to confront the PRC.

Abe already has enough problems trying to shove the Futenma base relocation down the throats of the resisting Okinawans; he does not need the additional headache of having to rebut the argument that the US alliance brings with it additional nuclear contamination.

That is probably why, as CNN put it, “specific timelines are yet to be announced” for when the Reagan will actually show up at Yokosuka.

Third, the most logical way to deal with this issue once and for all would be to scuttle the USS Reagan in some conveniently deep marine trench and hope that the radioactive particulate will disperse sufficiently on the seabed and in the food chain to make the risk acceptable (the contamination issue, I imagine, would make the financial and political cost of scrapping the ship unsupportable).  However, I imagine the US Navy is loath to scuttle a $6 billion ship that is also the symbol and instrument of US military hegemony in the Pacific in order to prevent a few dozen potential premature cancer deaths.

Instead, as noted above, instead of shunting the Reagan off to some US base, the US government announced in January 2014 it would station it at Yokosuka.  Maybe the Defense Department has decided that the best defense is a good offense, and instead of giving credibility to Japanese nuclear anxieties, it’s just going to say The ship is clean, here’s the ship, it’s not going anywhere else.

However, nuclear fears are notoriously difficult to allay and it will be a challenge for the US Navy and the Abe government to use scientific, statistical, and University of Chicago-style cost/benefit analyses to reconcile the Japanese citizenry to the presence of the USS Reagan.

So I predict that the preferred strategy of the US Defense Department and the Abe government will be: first, don’t acknowledge there’s a problem, followed by the usual stonewalling, modified hangout, and suppression of negative information—information like this from Stars & Stripes:

Sailors who were onboard the Reagan have claimed that they were drinking contaminated desalinated seawater and bathing in it until the ship’s leadership came over the public address system and told them to stop because it was contaminated. They claim the ventilation system was also contaminated. Furthermore, some claim they were pressured into signing forms confirming they had been given iodine pills when none had been provided.

Given the stakes involved—not just the $6 billion aircraft carrier and the health of its crew, but also the implications for the Abe government and the US-Japan alliance if the Ronald Reagan story gets out of hand—it will be interesting to see how the media covers this story.

Start following our signals NOW & profit up to 270% daily.