I am pleased to report that in this month of January 2017 Nicholas Wilson was both able to avert foreclosure on his home for back mortgage payments and get the British government to acknowledge the merits of his 13 year campaign as a whistleblower to bring HSBC to book for improper charges on credit card debt.  Details here.  Background here. 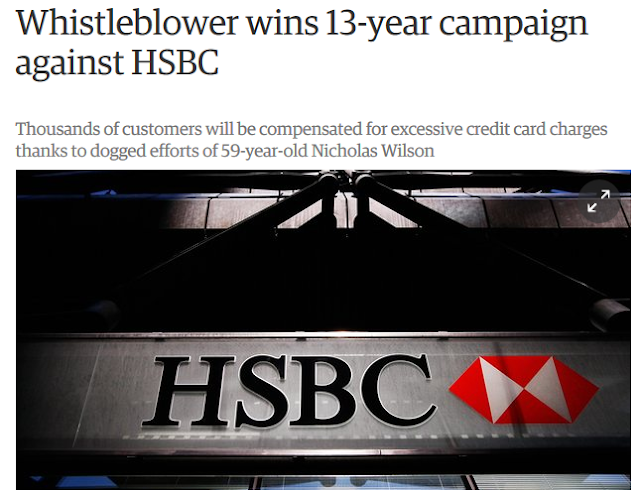 For those of us who participated in Wilson's crowdfunder to save his house, there's a nice shoutout at the end of the piece:

[Wilson] said the proceedings were later dismissed after he paid off all the arrears “thanks to supporters on Twitter”. An online crowdfunding appeal had raised about £3,700.


Once again, I thank everyone who responded to my notice of Wilson's crowdfunder by either contributing or retweeting, with special thanks to Jeffrey St. Clair at CounterPunch and Joanne Leon at Shadowproof for publicizing the effort to their followers.

The actual rates www.sbobetuk.com of interest associated with cars maintain upabout changing which sabung ayam pw leaves 1 along with totally different choices. You simply would like to bring in to consideration your requirements, that cause it to be quicker as well as simpler to obtain top provides. You merely got to discover the actual financial lending options with regard to a sbobet asia chance of receiving top provides. You might also need the prospect associated with investing inside the car financial options simply ayampw

WhatsApp Package. Zong bring something which gives the great value of their money. That's the reason they keep the price low for WhatsApp bundles so the user can enjoy more data volume. To subscribe to free Whatsapp, you simply need to dial *247# and start enjoying all Whatapp features.
Weekly packages, Monthly packages ...

Zong is an international cellular network. Zong won the auction of 3G and 4G. 4G Internet packages are yet to come. Zong will ensure its customer to give quality
Zong 4G is one of the most successful mobile data networks in Pakistan. Zong 4G internet packages are designed carefully in order