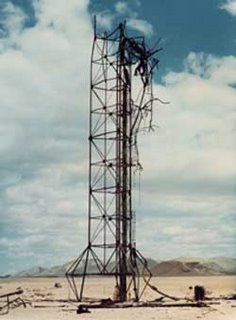 The Democratic People’s Republic of Korea has not done its image as terrifying boogeyman of Asia any favors with its fizzled nuclear test.

Calculating a yield of a few hundred tons from the seismic data, Dr. Jeffrey Lewis pointed out that achieving such a low yield intentionally would be a technical challenge for even the most advanced nuclear powers, so Kim Jung Il’s weapon test on October 8 was almost certainly a failure.

However, the awesome power of the left-leaning blogosphere has been convincingly demonstrated…

...as it brought Dr. Lewis’ site, Arms Control Wonk, to its knees by an onslaught of links from the Washington Monthly, Americablog, Dailykos, and others.

I was only able to catch up with his post labeling the North Korean test a dud only when it was cross-posted on Defense Tech.org.

There is one assertion by Dr. Lewis that perhaps merits a rebuttal:

A plutonium device should produce a yield in the range of the 20 kilotons, like the one we dropped on Nagasaki. No one has ever dudded their first test of a simple fission device.

North Korea cannot even claim a first in the dismal realm of nuclear futility.

The device, Hydride I, weighed 7400 lb, was 56 inches in diameter and was 66 inches long. It was installed on a 300-ft tower, and Laboratory researchers stood back at the outlying observation station with their dark glasses on waiting for the device to go off. When it was fired, all that was visible was a small speck of light on the horizon—no mushroom cloud. Normally during a test, the detonation is seen about a minute before the sound reaches the observation station, and there is an announcement over the loudspeaker system warning to brace for the shock. According to Wally Decker, a young Laboratory engineer involved in his first field test, the shot went “pop.” The predicted yield was 1.5 to 3 kt, while the 200 ton yield was a fraction of that. As the dust cleared, dismayed engineers and scientists peered through their field glasses and saw the tower was still standing. As Decker walked away he passed a guard who asked in all innocence, “When is the sound going to get here?”

While Livermore researchers were trying to find out what went wrong with the shot, Los Alamos personnel were busy taking a picture of the barely damaged tower.

The famous picture—gleefully archived by Teller’s disdainful rivals at Los Alamos—is at the top of the page (the North Koreans lit off their dud today underground).

A few months later the Laboratory prepared for another event with a slightly different design, and chose a 100-foot tower instead of a 300-foot one. Like Ruth, Livermore's second hydride test, Ray, on April 11, 1953, also fizzled. The explosion, however, at least managed to level the bomb's 100-tower. The tower had an open platform and the device was set up on a blustery day around Easter during rain, snow, and a dust storm. To protect the device from the weather, a large canvas tarpaulin was used to cover it. The device was fired with the same dismal results. The guard at the site commented, “Gee, you shouldn’tve put that canvas over it.”

In passing, it’s interesting to note that the uranium hydride bomb was a solution that Oppenheimer had rejected at Los Alamos when he headed the Manhattan Project, but Teller thought he knew better--and also thought Oppenheimer was too quick to disdain this path to the small, usable nukes that Teller adored.

The failure of the uranium hydride bomb vindicated Oppenheimer, and this embarrassing setback perhaps fueled Teller’s paranoia and megalomania.

Subsequently, of course, Teller agitated successfully for the removal of Oppenheimer’s security clearance because, in his view, Oppenheimer had used technical excuses to dissemble a deep philosophical opposition to another cutting edge weapon--the hydrogen bomb.

One can only wonder--and worry--about what effect North Korea's massive fissile dysfunction will have on Kim Jung Il's psyche.

Certainly, it will undercut his swagger when dealing with the other acknowledged and nascent nuclear potentates in Asia.

It is interesting that the North Koreans were unable to master an implosion-type device.

To be fair, the North Koreans might have been trying to push the envelope on their first test—just as Teller did—by cutting back on the amount of fissile material used in an attempt to stretch their reserves of plutonium from the balky Yongbyon reactor to five bombs instead of the predicted four.

Even with a healthy amount of fissile material, implosion bombs are famously a difficult business to bring about, requiring a mastery of chemical explosives, hydrodynamics, metallurgy, detonation hardware, and initiator technology, etc.

By all accounts, the North Koreans have not received any significant help in weaponization (although training of scientists, reactor technology and plutonium extraction, and uranium enrichment are a different story), so they were probably pretty much on their own.

Nevertheless, the Chinese were able to master the weaponization details of an implosion device (the Chinese decided to go straight to implosion instead of gunning their U-235) in 1960-64 by themselves with slide rules, a few hand calculators, people mixing chemical explosives in buckets, and their advanced machining technology for shaping the uranium core: a mechanical lathe and a guy named Yuan.

As happened in other critical dramas during the bomb-design program, this one…drew a crowd of distinguished kibitzers. Vice Minister Yuan Chenglong and leading cadres from the atomic energy complex joined the entire workshop crew…Yuan, temporarily full of confidence, told them: “You can rest assured that we will without question succeed in maching the nuclear component to the required standard.”

All was fine until the uranium ball was put in the vise. Faced with this unfamiliar reality, Yuan lost his poise and became visibly upset. He suddenly appreciated the high risks involved, for he was machining lethal uranium, not ordinary steel. His work would determine the success or failure of a decade of labor by tens of thousands…A colleague, sensing Yuan’s stage fright, reminded him to start machining. That only made matters worse, and his increased trembling caused the uranium ball to slip in the vise. This of course, made Yuan even more panicky…
…Yuan appeared to have completely lost his confidence…

Soothingly, Zhu [Linfang, the head of the facility] told Yuan: “It will be no problem for you…”…He urged Yuan to relax for a few minutes, have a glass of milk, and then return. Even though it was now late at night, Yuan agreed and, back at the lathe, began again…By early morning…the nuclear core for the bomb was ready.

You see, Mr. Kim? Sometimes a kind word and a glass of milk is all that’s needed. Too bad both commodities are in short supply in the DPRK.

Maybe North Korea may have to switch to Plan B: exploiting its domestic uranium reserves, assiduously enriching uranium using the cascade of centrifuges it acquired from A.Q. Khan (I haven’t read anything that gives an idea of how many North Korea has, but the story that Khan used to fly C-130s laden with nuclear hardware to Pyongyang in the 1990s makes one think this is a significant effort), and try again with a gun-type bomb that will place less onerous burdens on its isolated scientists.
Posted by China Hand at 5:03 PM

I feel sorry about all those people belonging to this terrific state. Clenbuterol

Vibram FiveFingers Kso
and Peru free industry agreement (FTA), the contract was implemented, and the US / Colombia Cost-free Trade Agreement, the actual Agreement has not still been approved

Monster Justin Bieber Beats
Of course, the particular rich, these things really are barefoot, perhaps, a few serious injuries Vibram Your five Fingers of CSR activities of a simple and reliable advantage for the paws, which always appears like you're barefoot

Vibram Five Fingers Kso Trek
The idea that our foot without shoes using rubber soles, everyone has evolved over the long term

he actual Florida Assistant involving Talk about web site says Baja Sportfishing's enterprise license has become suspended Benjamin Pineda Gomez explained he'd no title Ed Hardy or information regarding the person exactly who passed on Beach Firm spokesperson Alan Jeffers claimed there were virtually no strong interconnection between all those Discount Burberry Cheap troubles and also the pipeline failingRadiohead's attraction with Tiongkok is obvious from your huge following the weibo swiftly received "We have to incorporate harder nike air jordan clearance safety expectations Other individuals incorporate Tom Luxury cruise, Microsof company president Bill gates as well as Basketball players Ralph Artest along with Kevin Garnett authentic nike air jordan even though the amount of his or her followers path a lot at the rear of Chinese famous people"Is this kind of the real Air Jordan Cheap deal?Inch consumer BrattyB said"We possess each thus looked forward to this present day, in addition to finding a little more about the lovely tropical Cheap Air Max isle,Inch he saidThe particular 20-year-old Silvertip pipe delivered Forty five,000 kegs daily to a refinery inside Billings along any course that will goes by Discount Burberry underneath the lake