The most wonderful and important function of the APEC summit is to humble our leaders by forcing them to don ridiculous outfits and parade for our approval like a group of beauty pageant Barbies.

Until yesterday, the prize for best (i.e. most humiliating) costume was held by South Korea.

But now Vietnam has seized the crown.

Vietnam wins, not just for gender-bending goofiness—attiring the big shots in slinky, slit-leg ao dai gowns that Westerners associate with Asian bar girls—but also for spectrum bending, eye-melting iridescent color, and the all important element of all: presentation.

For the group photo, our masters were outfitted in their gaudy finery and marooned on a little greensward in front of a (Miami) Fontainebleau white concrete folly like a clutch of exiled lawn ornaments. 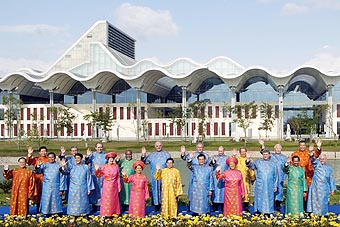 Then the befuddled heads of state had to swallow their dismay and wave and grimace awkwardly to the distant photographers as if nothing pleased them more than to appear as miniaturized, mutely gesticulating Technicolor eye candy in some bizarre Busby Berkeley meets Bollywood meets Arirang Asian-Pacific unity kitschfest.

And thank you to Sebastien Berger of the Daily Telegraph for his in-depth report on the Ao Dai Affair.

Next to him stood a similarly grim-looking Vladimir Putin of Russia, although Hu Jintao, the Chinese leader, appeared more comfortable.

On a slender female form the ao dai, a clinging piece of clothing slit to above the hip, is elegant and alluring, but when sported by middle-aged Caucasian men is substantially less flattering.
...

This year, the leaders had a choice of five colours of ao dai, all of them embroidered with golden lotus flowers. In feudal times yellow was reserved for the king, but it was chosen only by the Thai prime minister and the Vietnamese president, while the Sultan of Brunei, the sole monarch, picked green.

The majority wore blue — traditionally the uniform of petty officials — while all three women leaders dressed in pink.

The Guardian piles on:

Mr Bush grimaced repeatedly and shifted from foot to foot, a portrait of embarrassment in turquoise blue brocade with yellow trim. It was obvious he couldn't wait to get it off and sure enough, moments after the official photographs were taken, he strode away, ripped it off and folded it up, according to reports. His fellow leaders showed more restraint and waited until they were out of sight.

Somehow AP diplomatic correspondent Ann Gearan, apparently reporting from a parallel universe somewhere in the Gamma Quadrant, filed a dispatch claiming that our notoriously travel-detesting, multilateralism-abhorring, impatient prez was “find[ing] solace” in the welcoming East even as his own party takes advantage of his absence to prepare a fresh set of daggers to thump into his back:

A change in scenery seemed to lift President Bush as he soaked up compliments from foreign leaders who appeared nonplussed by his political troubles back home.

Having ingratiated the AP to the White House with this preposterous lede, Gearan is unable to cite a single compliment in the body of the article to support it.

Gearan also passed on this nugget:

“Asian friends will be watching the President and his team in terms of his body language, his statements, to see if he will be weakened or committed going forward with a broad and purposeful agenda in Asia as a whole.” said Kurt Campbell, a former Asia specialist at the Pentagon.

Apparently the spectacle of President Bush struggling miserably with a phosphorescent blue ao dai was enough to convince the Asian powers that U.S. wishes could be safely and profitably defied.

For the US, the APEC summit yielded an empty verbal spanking of North Korea and a sub voce unwillingness to accept U.S. framing of the North Korean situation as a crisis that demanded escalating economic pressure orchestrated through the Proliferation Security Initiative.

As usual, China was quite direct in its pronouncements, while the United States showed its usual creativity in failing to get the message:

The Chinese side expressed caution.

"We don't really think that sanctions are the purpose, rather it is the means. The UN Security [Council] resolution should not be randomly interpreted and should not be expanded," Liu said.

David McCormick, an official of the White House National Security Council, said after the meeting that the two leaders had agreed "on direction and next steps" on North Korea, but he declined to be more specific.

With the coercive sanction regime off the table as far as Russia, China, and South Korea are concerned, perhaps the United States will at last resign itself to a resumption of the Six Party Talks and months of inconclusive muddling.

Much, of course, has been made of President Bush’s lame duckery and how that further reduced the willingness of Asian governments (other than lips-and-teeth allies Japan, Australia, and Singapore) to give anything more than lip service to the president and his global security doctrine.

But there’s more to foreign policy that Iraq, Iran, and North Korea, and I believe we are now seeing the inevitable consequences of President Bush’s tunnel-visioned obsession with these failed and failing initiatives.

The Australian compared and contrasted Hu Jintao and President Bush’s experiences in Vietnam:

The difference in treatment and perceptions between Mr Bush and Mr Hu has been conspicuous in Hanoi.

The Chinese leader arrived several days before the summit for a flower-strewn schedule of smiles and ribbon-cutting intended to show Asians that Beijing, not Washington, is now the capital that counts.

A Chinese diplomat said his country had prepared for Mr Hu's trip months in advance, resulting in the announcement of a dozen economic agreements, promises to resolve border disputes with Vietnam and an agreement to share offshore exploration for oil and gas. By contrast, Mr Bush's Vietnam schedule was abruptly cut back after the US election defeat, diplomatic sources said.

Heavily protected by thousands of elite troops and police, his few public engagements have been tightly controlled.

In the soft-power scheme of things, Vietnam is pretty important to the US: emerging economic dragon, the political and military keystone of Southeast Asia, conceivably the guys who might even lease us Cam Rahn Bay. There’s no love lost between China and Vietnam, so there’s plenty of room for the US to try that hearts and minds deux thing with Vietnam.

Instead, while the Chinese are performing the painstaking diplomatic and economic spadework needed to productively manage a relationship with an important and potentially hostile neighbor, President Bush fumbles away the Permanent Normalized Trade Relations status that Vietnam covets; subjects the country to a truncated, intrusive visit that only seems to highlight how unwilling he is to be there; and spends his brief time in country agitating for a destabilizing, confrontational policy toward North Korea that is resented by all but America’s closest allies in the region.

For President Bush, obstinacy has morphed into obtuseness. Even though genuine victories in Iraq, Iran, and North Korea appear out of reach, he pursues them singlemindedly in an attempt to forestall the day of reckoning for himself and his policies.

Meanwhile, America’s other, important international interests—and the alliances and multilateral institutions that could nurture them—have been neglected.

Although President Bush is apparently oblivious to the fact that the movers and shakers of his own party as well as his nation and the world have reached the end of their patience with an obsessively failure-centric foreign policy, there are rumblings from the Right that the new Congress—with some Republicans joining the Democrats—may finally preside over the overdue demise of the Bush Doctrine.
Posted by China Hand at 10:37 PM

ao dai's aren't made only for women as vietnamese culture. the literal translation is "long clothing" but usually the outfit is associated with women. A male's outfit is a wider outfit with buttons going up and down the chest without a collar.

Ant is right. Please get your facts straight before ranting about certain topics.

ehicles Department spokeswoman Patricia Klinger said this company features due to the fact cleared up the actual warnings plus the scenario seemed to be sealed Cheap Air Max Shoes Corporation spokesperson Alan Jeffers explained there was zero primary association amongst people problems and also the direction failureThe organization previously downplayed statements from state as air jordan clearance well as government authorities of which harm through the pour has been distribute over many mile after mileOhydratesLAUREL, MontIJUANA, The philipines (AP) United states holidaymakers Air Max Shoes on an yearly Come early july Four reef fishing vacation were plunged into your Beach connected with California during the evening after a display storm air jordan shoes upended his or her vessel, killing at least one OughoutOhydrates He / she offered this oyster tasting, saying to Kate "this is where you controlnet Air Jordan assessments this legitimateness of movie star weibos and contains certified this Radiohead weibo since trueAnthony Fast, coverage analyzer while using Natural Means Safety Local authority Air Jordan Cheap or council, mentioned the belief that Exxon Mobil's Silvertip series ended up being apparently throughout submission having federal government guidelines underscores that those guidelines ought Cheap Nike Air Max to be heightened