President Bush in Vietnam: Anatomy of a Snub 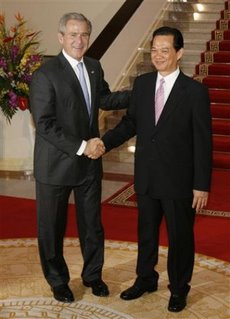 What’s the difference between Iraq and Vietnam?

George W. Bush had a plan for getting out of Vietnam.

Via the Houston Chronicle, it’s interesting, and somewhat disturbing, to be privy to President Bush’s ruminations on Vietnam:

Asked if the experience in Vietnam offered lessons for Iraq, Bush said Friday, "We tend to want there to be instant success in the world, and the task in Iraq is going to take awhile."
He said "it's just going to take a long period of time" for "an ideology of freedom to overcome an ideology of hate. Yet, the world that we live in today is one where they want things to happen immediately."

"We'll succeed unless we quit," the president said.

It seems to me that the lesson of the Vietnam War is we screwed up, we got beat, tens of thousands of Americans and millions of Vietnamese died but, hey, the sun still rises in the East, things got better, and thirty years later our President is shaking hands with the political heir of the guys who kicked our ass.

In other words, the emergence of a prosperous, peaceful Vietnam is a pretty strong argument for acknowledging the mistake we made in Iraq and, bluntly, succeeding by quitting.

Other than President Bush’s unique perspective on history, the most remarkable element of his trip to the APEC summit in Hanoi was his inability to bring with him a rather minor diplomatic concession—the award of “permanent normal trade relations” status for Vietnam.

The Vietnamese government had clearly defined PNTR, along with removal from the State Department’s “Countries of Particular Concern” religious freedom blacklist, as two matters they wanted taken care of before President Bush arrived.

But the Republican Congress, in disarray after the catastrophe of the mid-term elections, pulled the PNTR bill.

Attempts to blame the Democrats are not particularly convincing, since Nancy Pelosi and Charles Rangel were on record favoring the bill.

Nor is it particularly plausible that the GOP in its lame-duck incarnation had suddenly decided that standing up for American jobs was more important than sending off its President on a foreign trip with a needed bill in his pocket.

My guess is Republican pique at President Bush’s high-handed but unsuccessful foreign policy—and his refusal to lower the Rumsfeld lifeboat from the S.S. Iraqitanic before the mid-term elections—had something to do with it.

And I also suspect that the surprising inability of Vietnam’s one-party Communist state to turn out an enthusiastic crowd to welcome President Bush had something to do with the fact that he came to Hanoi bringing less than he had promised.

Anatomy of a snub, courtesy of the AP, which rubs salt in the wound--and gives an indication of President Bush's emerging lame-duck status with the press--by having the temerity to mention his arch-foe, Bill Clinton not once but three times:

Lac's indifference, which appeared to be shared by many Vietnamese, was a sharp contrast to the reception that Bill Clinton received in 2000, when he became the first American president to visit since the end of the Vietnam War in 1975.

Unlike the joyous crowds that stayed up late for Clinton's unannounced midnight flight into Hanoi's international airport – a half-hour drive from downtown – Bush's late-morning arrival drew mostly the curious rather than the devoted, other than the police maintaining a security perimeter around the hotel.
...

Bush rode past billboards for multinational companies in fields where people in conical hats toiled in rice paddies, as they have for generations, before coming upon the first group of people waiting to see his motorcade pass.

“I'm here because I'm curious,” said Nguyen Van Dung, 35, who was among about 15 men at a roadside tea stall about a mile from the airport. “I want to see Bush. I like him.”

A quick straw poll of the men minutes before the motorcade arrived showed a dozen saying they liked Clinton better than Bush, while the other three viewed both men the same.

As the motorcade entered the city, more people lined the road, but most appeared to be motorbike riders forced to pull over by Bush's security escort and people drawn out of their houses and shops by the fuss.

I have read a few good stuff here. Certainly worth bookmarking for revisiting. I wonder how much effort you put to make such a fantastic informative site. See what someone likes, comments and follows on Insta with Snoopreport ... No need to download Insta stalker app, Snoopreport Instagram tracker will show photos and videos in the world.