[Update: It is possible that AP’s visit to Liu Xia was facilitated by the regime.  For a possible precedent see Blind guy evades 100 captors and gets to Beijing just in time to give Hillary Clinton a headache.  However, the timing doesn’t seem right to me, as the reportage on Liu Xia detracted from the hoopla surrounding Mo Yan.  If this were a CCP strategem, I would think the more effective strategy would have been for Mo Yan and the PRC to claim their moment in the Nobel sun, then a few days later allow the focus to shift to Liu Xiaobo’s incarceration and what the new, ostensibly more hip and liberal regime of Xi Jinping might do about it.  Instead we get the framing of “posturing of pro-regime hack undercut by image of Nobely/nobly suffering spouse”.  If you want to tie yourself into conspiratorial knots, you could speculate that hardliners secretly orchestrated the visit to embarrass and anger the new leadership, thereby creating conditions for Liu’s continued detention.]


Judging by tweets and retweets, Mo Yan is in the bad books of Western journalists for failing to recognize that with the great privilege of the Nobel Prize comes great responsibility, at least the responsibility to demonstrate fealty to Western attitudes concerning intellectual freedom and to demonstrate solidarity with other winners who are not in a position to enjoy their prizes to the fullest…like Liu Xiaobo.

But read the AP piece and see if you can spot the possible flaw in this bold effort in compare and contrast:

Stunned that reporters were able to visit her, Liu Xia trembled uncontrollably and cried as she described how absurd and emotionally draining her confinement under house arrest has been in the two years since her jailed activist husband, Liu Xiaobo, was named a Nobel Peace laureate. 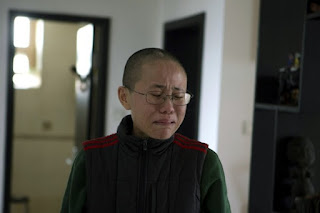 In her first interview in 26 months, Liu Xia spoke briefly with journalists from The Associated Press who managed to visit her apartment Thursday while the guards who watch it apparently stepped away for lunch. Her voice shook and she was breathless from disbelief at receiving unexpected visitors.

…
Liu, dressed in a track suit and slippers, was shaken to find several AP journalists at her door. Her first reaction was to put her hands to her head and ask several times, "How did you manage to come up? How did you manage?"

Around midday, the guards who keep a 24-hour watch on the main entrance of Liu's building had left their station — a cot with blankets where they sit and sleep.

It is unlikely that the PRC regime decided to allow covert access to Mdme. Liu at this particular instance, thereby letting the international media rain on the parade of its preferred Nobelist, Mo Yan.  The AP's journalistic derring-do is unlikely to please Mdme. Liu’s jailers.

If the reporting concerning Mdme. Liu’s shock and surprise is accurate, she is very likely terrified that the AP reporters’ visit will lead to some retaliation against her: curtailment of the monthly visits to her husband, or possible removal to even less endurable detention outside Beijing.

Maybe Mo Yan is not the only one who is learning that a Nobel Prize brings with it unexpected and possibly unwanted responsibilities.

Maybe we’ll find out what kind of retaliation Liu Xia suffers…the next time there’s another Chinese Nobel Prize…whenever that happens.

Packers and Movers Bangalore as a Services providing company can make all the difference to your ###Home Relocation experience. Bangalore based Company which offers versatile solutions, Right team that easily reduce the stress associated with a ???Household Shifting, ***Vehicle Transportation. we help things run smoothly and reduce breakages and offer you seamless, Affordable, Reliable Shifting Services, Compare Shifting Charges. @ Packers And Movers Bangalore