Is AP and/or the Japanese Government Really Confused About the Difference Between a Fighter Jet and a Surveillance Turboprop?

After raking the Irish Times over the coals for screwing up the headline it tacked onto the Reuters story about the alleged intrusion of a Chinese military aircraft into Japanese airspace by calling a Y-8 turboprop a “fighter plane”, I was…interested? bemused? incensed? to see AP run its story with the fighter plane characterization in the body of the text.  As in:

Tokyo expressed unease Thursday over Chinese military and maritime activity near disputed islands that Japan controls, as China defended a flight by one of its fighter jets near Japanese airspace.

I think it was a flub by AP, though I would be interested to find out if the reporter was simply passing on an incorrect? misleading? dishonest? characterization by a Japanese government official.

Was it a fighter plane to begin with, and initial Japanese government statements got it wrong?  Or was it a turboprop, which is now turning into a “fighter jet” in order to give the story some more legs?  Inquiring minds want to know.

For military aviation enthusiasts, Wikipedia tells us that the Y-8 turboprop, when converted to an airborne early warning aircraft, is called the KJ-200 Balance Beam.  Why “balance beam”?  Ask a gymnast.  Here is a picture I found on the Internet of this fearsome armament: 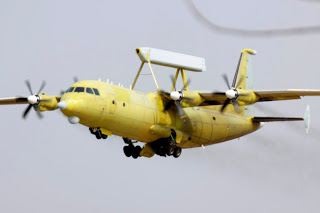 Anybody get a picture of the Chinese intruder?  The great thing about maritime confrontations is that there’s nobody out there except the Japanese Self Defence Forces, so the Japanese government has near total control of the stories that come out.

As I reflect on the ongoing Senkaku/maritime saga, I am increasingly of the opinion that Prime Minister Abe welcomes tensions with China because it gives him a pretext to expand? exceed? the boundaries of the pacifist constitution with new missions and capabilities for the Japanese military without the need to make difficult explanations to the U.S. government and Japan’s neighbors about his manifest desire to transform the Japanese military into a strategic asset: one that not only intimidates and deters Japan’s neighbors and gives Japan the necessary capability and credibility to construct and lead alliances of lesser regional states, but also turns Japan into a self-sufficient and independent actor in the Asian security game: one that can dare ignore or defy the United States, and perhaps even use its unilateral capabilities to force the U.S. to either endorse its actions, follow them…or get out of the way.

So aggressive Japanese government spin about Chinese intentions and actions that push the boundaries of plausibility and truth are to be expected.

As to whether Japan would actively foment or misrepresent confrontations with China, well, for now I leave that interesting question to the intrepid journos of the leading media outlets.

There is lot of information and they are very innovative and informative. I have read the article very well and it seems to me awesome. agen bola, agen sbobet, judi bola, agen ibcbet

ISO tanks can transport up to 60% to 70% more liquid cargo than drums on dry box containers. Furthermore, loading & discharge is safer, faster, and often cheaper than drums and flexibags. Tanks are manufactured from stainless steel, which offers high corrosion resistance and can withstand extreme forces vis-à-vis drums or flexibags. These factors are driving the ISO tank container market growth.

Adam Lee said...
This comment has been removed by the author.
3:46 AM

Thank you for sharing this useful content. The information you describe here would be useful. I want to share with you all a useful source Netflix Customer Support Number 1800-383-368, which may be interesting for you as well.

Thank you for sharing this useful content. The information you describe here would be useful. I want to share with you all a useful source Netflix Customer Support Number 1800-383-368, which may be interesting for you as well.

Thank you for sharing this useful material. The information you have mentioned here will be useful. I would like to share with you all one useful source How to visit Statue of Liberty.

This report is a must-read for entrepreneurs, investors, researchers, consultants, business strategists, and all those who are planning to foray into the PET Container Market industry.

Your work is very good and I appreciate you and hopping for some more informative posts.
I recommend you to read my article on Tips to Fix Common Typing Errors. and eliminate your typing errors, spelling, and typing mistakes.

The report explores the dynamics that have a strong influence on the Paper and Paperboard Container and Packaging market and can also impact its future growth.

I am Alice Addy, a Corporate Sales Specialist operating in the Latin American region. We are experts in Market Research (Mercado Latinoamericano de Arilamina). We provide market reports across various industry verticals and also help with procurement and supply chain intelligence. By giving you better insights, we help you make informed business decisions.

I am Alice Addy, a Corporate Sales Specialist operating in the Latin American region. We are experts in Market Research (Mercado Latinoamericano de Pectina). We provide market reports across various industry verticals and also help with procurement and supply chain intelligence. By giving you better insights, we help you make informed business decisions.

The global Polydextrose Market size was valued at USD 225 million in 2015 and is anticipated to grow at a CAGR of 5.6% over the forecast period. Increasing health awareness and growing consumption of functional and nutritional foods is expected to drive the market growth. It promotes the usage in weight management, fat reduction, rising satiety, and prebiotics.

The Global Pet Tech Market is expected to grow at a high CAGR of 24.7% during the forecasting period (2020-2027). A Pet is an animal kept mainly for a person’s company or entertainment rather than as a working animal. Pet owners are seeing pets as family members and are willing to spend on their pets’ health, fitness, and well-being.

Across the globe, Pet Humanization is on the peak. In Japan, rising Humanization, isolation factor, the ageing Japanese population are driving the Japan Pet Food market. These trends have led to a greater focus on pet health, nutrition, Pet obesity, and overall wellness. This focus on specificity is increasing the unit price of the product thereby countering the reduced volumes sales and Products recalls that may hinder the growth of this market. Japan Pet Food Market is expected to be more than US$ 4 Billion by the year 2025.

My name is Timpaine from New York, US. I have good exposure in writing creative content about printers and their features. On my website, I provide instructions for printer setup, driver download, and troubleshooting issues. If interested, visit my site.

Thanks for sharing.Are you tired up how to scan on hp envy printer ? We assist the scan setup, driver download, and wireless setup.

Great information. I always love to read and spread this kind of information that is unique and informative. Keep up the good work.
We deal with bulk SMS service if you want to know more visit the given site
smssquad

If you are interested in the blogging industry, check out the latest posts on the great site. Post-related mouse click counter. Read the article click counter online and have a good reading experience.

Bonafide Research is one of the fastest growing market research and consulting company. We are expert in syndicated research reports & custom research solutions across the domains.