On the occasion of the Supreme Court’s legal mainstreaming of gay marriage, and the decision by US corporate, political, and media arbiters that yes, maybe, the official presentation of the Confederate flag by the State of South Carolina and its symbolism in the institutionalization and celebration of racism and rebellion against the federal government (as well as good ol’ regional pride!) should no longer be condoned or overlooked, I was reminded how malleable opinions can be.

Stuff that used to be OK is now abhorrent.  And vice versa.

If you’re as old as I am, you might remember this riddle:

“A boy is injured in a car accident.  His father rushes him to the hospital.  The doctor comes into the emergency room and says, “I can’t operate on him.  He’s my son.”

Today, I imagine the reaction is WTF? What’s the riddle?  It’s his mom, right?

Well, back in the 1970s, when we rode dinosaurs to school, that was a real puzzler for me and my teen peers.  The idea that “doctors” were “men” was deeply ingrained, so that the “it’s his mother” reveal was a blinding insight that converted me into a committed feminist!

Well, anyway, it convinced me my conscious and subconscious were a grab-bag of tangled prejudices and received opinions.

And it’s made me more careful about regarding stuff that jars me as “wrong”, “abnormal”, “ridiculous”, etc.

And more careful about regarding stuff that pleases me as “right”, “normal”, “reasonable”, etc.

We all live in a world of manufactured attitudes, people.

Another example is attitudes toward female beauty, as I was reminded by On With the Show: The First Century of Show Business in America, by Robert C. Toll (New York, Oxford University Press, 1976) and its chapter on the evolution of American burlesque.  (I've already written about Toll's documentation of the 150-year run of minstrel shows as acceptable and indeed paradigmatic American entertainment).

“The first burlesque star to be crowned a “Queen,” May Howard [headed her own revue in the 1880s which was] “a leg show pure and simple,” explained the chunky star, who boasted that she would employ no woman who weighed less than one hundred fifty pounds.  The stocky woman with large thighs—some performers were even charged with wearing hip and thigh padding under their tights—continued to be the ideal until the turn of the century. 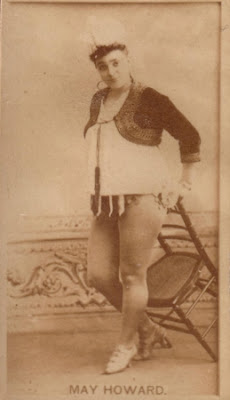 A sea change in popular attitudes was marked by the rage for the “Floradora” girls in the early 1900s.

“Floradora” was a popular piece of musical comedy piffle that racked up lengthy runs in London and New York.  It featured a sextette of beauties dubbed “the Floradora girls”, who had their own weight—and height—requirements, as Toll tells us:

…Whereas May Howard in the 1880s featured short, hefty women, the six Floradora Girls, who created a public sensation in 1901 as ideal women, were each 5’4” and 130 pounds…” 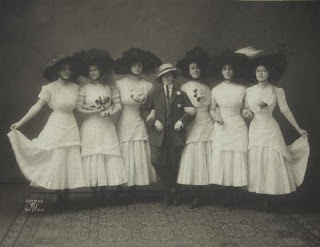 The Floradora girls, it should be said, were charged with looking fetching while fully clothed in a demure musical number, and didn’t have to do any burlesque-related heavy lifting.  Supposedly every one of the original Floradora girls married a millionaire, back when a million meant something.

Their type of lithe silhouette presented in various stages of dress and undress became a staple of the American musical theater, thanks largely to Florenz Ziegfeld & his “Ziegfeld Girls”, as documented in the public and secret work of Ziegfeld’s contracted photographer, Alfred Cheney Johnston. 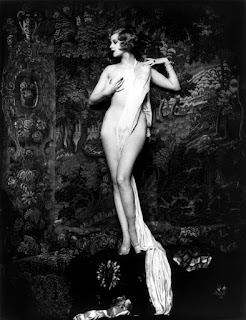 I suppose you can analyze American aesthetic choices in aggregate and say “As the focus of work shifted from rural to urban, the sturdy farm girl was supplanted by the [malnourished] seamstress”.

On the issue of “chunky” women, Ohio State University had an exhibit on burlesque and the curators had this to say about “beauty”:

The popular image of the burlesque performer was a large, tall woman, so powerfully-built that she was practically Amazonian.  Publicity for burlesque shows took advantage of this association, with posters depicting voluptuous, statuesque performers in the roles of military officers, charioteers, or even literal Amazon warriors.  This dominant female figure was fascinating and tantalizing, but like most aspects of burlesque, also a bit threatening.  Men loved to watch burlesque performers, but at the same time, they were afraid that her feminine power was too dynamic to stay safely confined to the stage.   In an era when women all over America were actively agitating for increased freedoms and legal rights, this was a very relevant concern.

Again, for Americans of a certain age, references to Amazonian women automatically elicit images of the women depicted by R. Crumb, the celebrated graphic artist and “underground comic” auteur:

R. Crumb’s sexual inclinations, indeed anybody’s, is too unique to generalize about.  But I don’t think he’s alone in his preferences.  As a matter of personal practice and artistic necessity, he’s just more up front about them.

So I would say that there is a broad spectrum of preferences and prejudices are innate both within individuals and society, and they are mutable and malleable, indeed more malleable than we would care to acknowledge.  They are shaped, expressed, and can apparently be changed permanently both by personal circumstance, and as a result of what society and state characterize as “good” and “bad” and “acceptable” and “unacceptable”.  And that’s a good thing…sometimes…and a bad thing…sometimes.

Just for the record, I think it's a good thing that the US population is apparently becoming more tolerant of gay marriage and less enamored of the Confederate flag.   But...

...as to whether any attitudes are intrinsically “bad” or “good”, I guess I’ll leave that subject to the moral philosophers.  As a matter of human behavior, I think I’ve learned enough to be cautious about how and why I—and society—choose to label things…

Johnston's archive is on deposit at the Library of Congress.  Portrait of Hazel Forbes.

Perceptions change. Culture can make us do strange things.

But nature is what it is.

Chinese used to bind women's feet, and that was deemed normal. But it went against the natural development of women's feet. Good thing that is gone forever.

Now, Americans are under the delusion that a homo man's fecal hole or anus is the sexual equivalent of a woman's vagina that produces life. Americans are under the illusion that if a man has his penis cut off and replaced with a fake vagina, it as good as real vagina. Real sexuality produced all the life in the world, whereas homosexuality never produced a single life form, but we are now to believe that they are equally valid. Even when homosexuals opt to have sex to produce kids, they must practice real sex than homo 'sex'. Even all the homosexuals were produced through real sex. Not a single life was created through homo 'sex'. Yet, homos want to fool us that there are such things as 'two daddies' or 'two mommies'.

So, if you go to a flower shop and order dozen roses, don't complain if they give you plastic roses. Why, that would be plastic-rose-phobic.

And if a tranny wants go to on a dating site and claim to be a woman to attract men, he should have every right to do so. (Eyes rolling).

Though culture can warp our perceptions and even though fashions change over time, there are certain constants in nature, and true morality must be honest about the way of biology. After all, we can pretend that someone's finger is a penis and another person's belly button is a vagina. And if the finger is pushed into the belly button, we can pretend that 'sex' happened. But it didn't. It's just fake 'sex'.

I was confused to comment, if I exaggerated when I said it was a remarkable article. I was amazed by the contents and it would like to continue reading even if the eyes are tired. really good article anyway. may I share articles like this penyebab kemandulan cara mengobati obat tendonitis/radang tendon gejala cara menyembuhkan usus buntu gejala stroke pengobatan The article discusses health treatment. The next article also discusses the same thing cara menyembuhkan katarak cara mengobati kista ukuran 8cm 7cm these articles I created to share information that might be useful for everyone cara mengobati kista ukuran 5cm 6cm cara mengatasi pengapuran tulang I'd love sharing goodness as with this article, hopefully it can benefit others.

There's a chance you are eligible to receive a $1,000 Amazon Gift Card.

Professional trading signals sent to your cell phone every day.

It’s no secret that most men only want one thing, right?

Well it turns out that’s not only wrong, but may actually be the root of many failed relationships.

In fact, the one thing men are universally obsessed with...

Is actually a feeling he’s been chasing his whole life.

It’s an elusive combination of emotion and biological drive that’s rarely satisfied in life or love.

And when you know how to satisfy this life long obsession...

He will make it his life long mission to cherish and please you...

And he will pursue your love to the ends of the earth.

Here’s a video you won’t want to miss that shows you how to become your man’s deepest obsession:

If you are in the transport business and complaining about the quality of your Tata Spare Parts whenever you hand it over for maintenance, you need to change your place of purchasing spares.