A Revolution in Strategy: US Shifts to Pre-emptive Posture for Asia 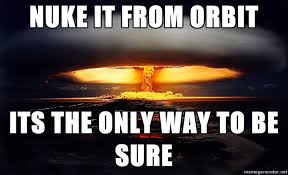 I have a piece up at Asia Times—only at Asia Times! Exclusive!—‘Beheading’ Kim: Pre-emptive Strikes are Back and Headed for China, on the implications of the leaked US decapitation strategy for North Korea.

In my opinion a) the US is testdriving an eventual pre-emption posture for the PRC in North Korea and b) it locks the US and its adversaries into an escalating threat dynamic that, for the United States is more feature than bug.

It’s a revolutionary development in U.S. strategy, in my opinion, reflecting an awareness that the PRC has been successful in evading U.S. deterrent posturing, so something bigger, dumber, and more dangerous is needed.

An article at by William Arkin at Vice News provides some more details on the North Korea contingency plans and, in the process, reveals a certain amount of confusion about the pre-emptive character of the decapitation strategy and what it means:

Since 2005, according to an intelligence source who spoke on background, the number of indication and warning reports on North Korea has increased from 60 a day to 600. "There isn't a mouse that scurries in the DMZ without note," the analyst claims. The end product, US military insiders think, is 100 percent alert capability in the event of a North Korean attack — a somewhat confusing concept considering an alert would demand action before an attack.

In other words, “decapitate on alert”, with the U.S. military claiming the ability to predict “100%” that the North Koreans are going to attack, and establishing the justification for launching a pre-emptive “decapitation” strike on that basis.

Wonder if there’s an algorithm covering Aggressive Mouse Movements in the DMZ.  Attack!

It should be pointed out how additional surveillance factors provide more reasons for attack.  Something to think about when considering the motivations and significance for the US push to deploy THAAD—with its 1000 mile look-in into PRC airspace—into South Korea.  How much if at all does the algo use an absence of detected threat activity to discount the overall threat calculus?  Or does it only factor in detected activities construed as threats, i..e. more data = more threat?  Inquiring minds want to know.

Anybody who believes that the U.S. military genuinely possesses 100% omniscience and, indeed, would never launch a pre-emptive attack as a matter of convenience and with less than 100% assurance an attack was actually coming, please form a line to the left for our presentation on our revolutionary Brooklyn Bridge timeshare.

The rest of us, please reflect on the fact that William Arkin, who was privileged with a backgrounder on the strategy, finds it “somewhat confusing” i.e. apparently has some difficulty in wrapping his mind around the fact that the United States has declared the ability to unilaterally and secretly define an imminent threat and launch a pre-emptive attack on that basis.

Arkin does, at least, have an awareness of what the pre-emptive doctrine implies for “use it or lose it” military planners:

As irrational as the North is portrayed in the West, its actions aren't totally without reason. Its military statement in response to this year's exercises accused the US and the South of rehearsing a "decapitation operation" that would produce the "collapse of the [North Korean] system."

Pyongyang warns that North Korea will strike out if the regime detects the "slightest" effort to target what it called "the supreme nerve center." And yet that targeting is already going on, the insane tyranny of sensible but self-defeating actions on both sides to preserve the peace. The South is threatened, the North is threatened, and the two sides, convinced they are right, ratchet up preparedness to a point where conflict becomes more and more likely.

One might draw the implication that an officially endorsed pre-emption strategy is stupid, escalating, and destabilizing.

Maybe it is, but “stupid, escalating, and destabilizing” is how the U.S. military likes it, in my opinion.  The U.S. military is supremely confident of its ability to dish it out and not take it in, especially with the US homeland a few thousand miles out of harm’s way.

The U.S. military (and, I expect, much of the government and almost all of thinktankistan) wants the PRC to start thinking about a pre-emption threat, especially as the geniuses in Washington struggle to come to terms with the fact that the spectacularly misconceived South China Sea gambit is floundering as the PRC dodges confrontation with the US Navy and US deterrent forces while solidifying its strategic position in the SCS.

Time to fail upward a.k.a. escalate, in other words.  If the PRC won’t challenge US military force directly, then it’s time to switch to a pre-emption narrative and freely impute PRC threats wherever and whenever we want to see them and put the PRC under threat of a pre-emptive strike no matter what they do or don’t do.

It would behoove readers with an interest in World War III and what it means to them to start looking critically at the drumbeat of US reports about PRC "escalating" & "increasing tensions" & "militarizing" in light of a US search for pretexts to strengthen justification for a pre-emptive doctrine.

Here's a good example of the hypothetical threat boondoggle.

Civilian resistance to living under the cloud of a looming pre-emptive strike threat might complicate this strategy, but thanks to the efforts of Western journos, look forward to this issue getting obscured, misexplained, or just plain lied about, so that a massive destabilizing military doctrine can be implemented in plain sight without its implications being adequately understood.
Posted by China Hand at 2:01 PM

Meanwhile the Presidentials look like a Ladder Match between China hating Trump and trigger happy Hilary.
What could possibly go wrong?

Wow this is awesome, very interesting article. I can imagine the energy and inspiration you have invested on this powerful combination of words. Many articles I come across these days do not really dive this deep to make it clear to their audience as you did. But believe me the way you interact is literally 100% perfect. I will instantly grab your rss feed to stay informed of any updates you make on your blog and as well take the advantage to demonstrate
5 WAYS TO SPOT A FAKE DRIVERS LICENSE WITH NO DMV RECORD which many people are ignorant of when ordering fake documents online. Not over demanding I will also take the advantage to ask for your permission to join our 179.3k members TELEGRAM GROUP
to share with us your ideas or any latest update on your blog.
Thanks I am Scott from Globex, we are expecting you on our platform.