Just to cheer everybody up:

Thereafter, would that I were not among the men of the fifth generation, but either had died before or been born afterwards. For now truly is a race of iron, and men never rest from labour and sorrow by day, and from perishing by night; and the gods shall lay sore trouble upon them. But, notwithstanding, even these shall have some good mingled with their evils. And Zeus will destroy this race of mortal men also when they come to have grey hair on the temples at their birth. The father will not agree with his children, nor the children with their father, nor guest with his host, nor comrade with comrade; nor will brother be dear to brother as aforetime. Men will dishonour their parents as they grow quickly old, and will carp at them, chiding them with bitter words, hard-hearted they, not knowing the fear of the gods. They will not repay their aged parents the cost their nurture, for might shall be their right: and one man will sack another's city. There will be no favour for the man who keeps his oath or for the just or for the good; but rather men will praise the evil-doer and his violent dealing. Strength will be right and reverence will cease to be; and the wicked will hurt the worthy man, speaking false words against him, and will swear an oath upon them. Envy, foul-mouthed, delighting in evil, with scowling face, will go along with wretched men one and all. And then Aidos and Nemesis, with their sweet forms wrapped in white robes, will go from the wide-pathed earth and forsake mankind to join the company of the deathless gods: and bitter sorrows will be left for mortal men, and there will be no help against evil.

Actually, my contention is that times are not particularly bad, and I believe the US political and social system is robust enough to weather the current storm.

What I do think is that the United States is facing a transitional crisis exacerbated by incompetent leadership.  Not Obama.  His successors.  We'll need an FDR.  Instead we’re gonna get Fala.  Woof. 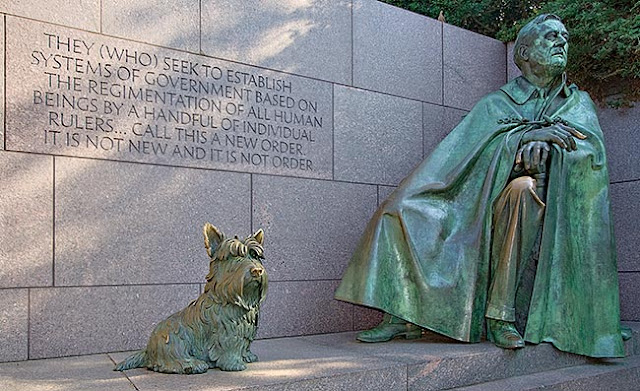 US elite opinion is pretty flummoxed about the whole Donald Trump phenomenon, even though the core of his appeal seem pretty clear to me.

His campaign draws its energy from a lot of white Americans who perceive the erosion of their economic and social advantages thanks to the perennial “rich get richer” dynamic and inflection-point demographic changes, symbolized by a two-term black president.  In the past, many whites expected they would have first claim on entry into the Valhalla of middle-class comfort if and when the gates were flung open.  Not so much, today.

The GOP leadership’s anxiety over this demographic phenomenon and its faltering attempts to move beyond its white base--symbolized by its quixotic promotion of certified Hispanobozo Marco Rubio—has, I expect, soured GOP white voters on their erstwhile political champion.

So, I feel pretty comfortable associating Trump with white anxiety shading on panic.   And, since my definition of fascism is pretty strict, if idiosyncratic, I don’t worry too much about a Trump or post-Trump overtly white--nationalist movement seizing state power.   Horses simply aren’t there, demographically speaking.  Here’s hoping I’m right.

Interestingly, Bernie Sanders is discretely trolling this reservoir of white discontent in search of supporters interested in a more overtly economic explanation of their unhappiness, one that relies more on current economic anxiety and analysis of social inequities than nostalgia for past glories.

What particularly interests me is what this ruckus is that many middle class and lower middle class voters are interested in racism-and-socialism tinged political and economic solutions.

What does this say about the prevailing US doctrine of race-blind politics and free market economics?

Well, what I think it points to is the inherent flaws of an elite-based economic, social, and political order, flaws that are getting put under more of a microscope as the US system creeps into crisis.

Funny thing is, by conventional metrics, the US system isn’t doing so bad, jobs and economy-wise.

And American elites, for whom the economy is always unfair in their favor, seem to have a little trouble figuring out why the American system has declined into such a clattery condition of dysfunction.

The Democratic and Republican leadership, in my opinion, drank the Kool Aid.  Their rather self-serving assumption was that electoral/free market system was self-regulating and would control and channel populist dissatisfaction while the elites got on with governing the country and profiting—as their abilities and energies unambiguously merited!—from its economic opportunities.

And they’re surprised that the clockwork mechanism might need a little cleaning and winding.

Maybe it’s because they inherited this world, instead of building it.

Pro Tip: It takes more than good intentions, it takes hard ugly work to keep a nation—specifically its elites--on top.

US populism of the “savory” and “unsavory” kinds, both of which interfere with elite governance, were kept in check by a few undemocratic/non-free market factors in the last few decades.

First of all, the US got a disproportionate share of global economic growth when three major economic powers—Germany, Japan, and the Soviet Union—were devastated by World War II.

Secondly, US political and economic populism were checked both by the inherent “divide and rule” racial dynamics of a post-slavery society, and by a concerted Federal attack on Communism, socialism, and radical trade unionism, black nationalism and white nationalism.

In my opinion, J. Edgar Hoover had as much to do with the making of the American Century as FDR and Eisenhower.

American “exceptionalism” is born of exceptional circumstances, opportunities, choices, and actions, not because God decided to put His/Her hand up the Masonicly-inclined asses of our Founding Fathers to employ them as divine sock puppets.

I am always astounded when the United States is characterized as a “democracy”.  It is a republic, openly and avowedly anti-democratic by design to forestall the populist excesses symbolized by the French Revolution.  Blacks not only didn’t get the vote in the beginning; they were counted as only 3/5 of a person to balance the political power of northern and southern states.  Women didn’t get the vote until the 20th century.  Even today, with a near universal adult franchise (not counting those 5.85 convicted felons disenfranchised in 2015, including an estimated 1 in 13 African American adults), the state structure, Electoral College, gerrymandering, constitutional protections etc. guarantee that the “democratic will” has to make several passes through the “republican” meatgrinder before its gooey remains emerge to become law.

The American political and social system is designed to keep elites in charge, and divide and disaggregate populist political movements.  But it’s still effective control by a minority, and it takes prosperity, exceptional leaders and, I’m afraid, frequent recourse to the discourse of domestic threats and overseas wars to make the majority forget they surrendered control of their futures to “the best and brightest”.

When people are feeling unhappy, scared, poor, and pushed around, believe their futures at risk, and the elite class is propping up obvious clowns, opportunists, and incompetents as their purported political leaders, they begin to remember that.

Elites seem to have forgotten.  And by diverting, marginalizing, discounting, dismissing, and demonizing populism over the years, elites pretty much guaranteed that when it arose, it would be alien and unsettling and they wouldn’t do a very good job of understanding it, coping with it, or co-opting it.

President Obama, whom I believe possessed the highest personal caliber of any president in the last century, barely kept populist agitation in check.  The bunch running for president this year doesn't seem at all up to the task.

Which is why both the Democratic and Republican parties are both under stress from two populist movements led by two personalities whose abilities to channel that populism responsibly and govern competently and effectively are, to be generous, questionable.

Elite incomprehension in the face of racist and socialist agitation—strains that have always been nascent in US society and are now resurgent—is, to me, pretty damning proof that our second-and-third generation elites are moving into the Iron Age of decline and decadence.

The Panglossian “best of all possible worlds” “set and forget” assertion that the Constitution and electoral mechanisms reliably ensured a perpetually smoothly functioning US society is still the governing dogma of US elites.  They've lost the plot.

This profound cluelessness is typified by the child-like faith that, if Trump is simply shown to be a nasty man, his support will just melt away.

But now it’s going to take more money, effort, PR, and, maybe violence to convince everybody else.

What comes after the Iron Age?

Hi admin please visit discounthotelsdubai.com get special discount with the best rates from all hotels in Dubai

The US runs the table. When called they can raise the stakes above the reach of the other players. That's why the US economy seems to do well.

Start following our signals NOW & gain up to 270% per day.

Start following our signals today and profit up to 270% a day.

Your site content is great and I love it very much.
چت
چت روم
نازچت
چت ناز

This is good article
https://sabunlicin.com/

Hello.
Your site has a lot of good and interesting content.
Thanks for all this useful and comprehensive content


inspiring posts.
I really like what you share.
I will come back again to see your next post.
please also visit the article that I made.situs poker online terbaru

Totally loved your article. Looking forward to see more more from you. Meanwhile feel free to surf through my website while i give your blog a read.
welcome to Newsome frenchies
where to buy french bulldog puppies
frenchies bulldog puppies
in Australia