No, the CCP Has Not Forgotten How the US Bombed the Chinese Embassy in 1999


I’ve got an article up on Asia Times , Chinese embassy bombing: Xi sends message by honoring martyrs in Belgrade.  It uses Xi Jinping’s attendance at a wreath-laying ceremony in Belgrade and the appearance of US electronic warfare planes in the Philippines to weave together a story of the technological competition between the US and PRC concerning stealth aircraft in an unexpected and interesting way.

My article unpacks the ins and outs of the stealthwars between the PRC & US, and the fact that, judging by US activities, pure stealth now only lives in the realm of myth and legend.  Real-world stealth needs some help.

The story is a bit trolly, in that it’s going up just before the UNCLOS Arbitration Tribunal announces its decision on the Philippines Nine-Dash-Line case.

SCS hawks are much enamored of a victim narrative in which everything was going so well until nasty old China decided to mess with the South China Sea in 2010.

Actually, US-PRC contention starts more than ten years before that, when the US bombed the PRC Embassy in Belgrade during the Yugoslav War, supposedly by accident, killing at least three PRC citizens (announced; more fatalities have been rumored) and occasioning the wreath-laying ceremony that Xi attended.

In 1999, the U.S. was still basking in the 1989 democracy movement afterglow and believed it enjoyed the special trust and confidence of the Chinese people.  When Chinese blowback from the embassy bombing instead turned out to be a measure of popular anger, the US blamed it on the fact that the CCP had withheld news of President Clinton’s apology from the Chinese people.  This does not seem to have been the case, but it did not stop displays of US resentment at the PRC’s churlish inability to accept our explanation and expressions of remorse.

Via a paper by researcher, Peter Gries, I came on a report on the response of Tom DeLay, the Republican whip in the House of Representatives, to what he considered to be self-interested CCP carping by the PRC ambassador to the US, Li Zhaoxing:

I was on Meet the Press…right after the bombing of the Chinese Embassy in Kosovo [he meant Belgrade], and the [Chinese] ambassador was on before me.  And if you remember, he’s kind of an obnoxious fellow and he’s screaming and yelling about how bad the Americans were, and I had had it up to about here.  So he’s coming off the stage and I’m going onto the stage and I intentionally walked up to him and blocked his way…I grabbed [his] hand and squeezed it as hard as I could and pulled him a kind of little jerk like this and I said: “Don’t take the weakness of this president as the weakness of the American people”.  And he looked at me kind of funny, so I pulled him real close, nose to nose, and I repeated it very slowly, and said, “Do-not-take-the-weakness-of  this president as the weakness of the American people”.

Li Zhaoxing, by the way, went on to become the PRC’s Minister of Foreign Affairs.  And the legacy of the embassy bombing, which occurred under “President Weakness”, probably contributes to shaping PRC attitudes toward the widely anticipated incoming president, Hillary Clinton, and her own attitudes toward China.

It’s a matter of self-interest for pivoteers to poo-poo the idea that we started it, and dismiss the possibility that friction in the South China Sea is perhaps a consequence of a US air raid on a Chinese embassy way back when.  But the record makes for awkward reading.

It should be noted that references, such as one by CCTV to a “NATO” bombing in the embedded video, are incorrect.  It was not a NATO mission, though the air war was supposedly a NATO project.  The operation that produced the embassy bombing was one of a small number of activities run by the US outside of NATO channels.

A U.S. show all the way from Whiteman Air Force Base in Kansas, in other words.

The evidence supporting the case that the bombing was an intentional US attack on the PRC is rather robust, including a clutch of investigative reporting carried out at the time by the Sunday Observer & Denmark’s Politiken.

And one thing that really didn't help was the US admission that the CIA only packaged one mission in the Yugoslavia war—the one that happened to gut the Chinese embassy.

"It was the only target we nominated," the director, George Tenet, said at a rare public hearing of the House Intelligence Committee.

After the strike on May 7, which killed three Chinese and wounded at least 20 others, the CIA decided it better go back to its usual business of spying, a U.S. official said Thursday. Reeling from its error, the agency almost immediately suspended other preparations it was making to forward additional targets to help NATO.

The incident was a tremendous shock/wakeup call for the CCP, and triggered a crash PRC program to counter and if possible match the US in key military technology, not just stealth but also infowar, command & control, etc.  “Etc.” also includes GPS—the US used GPS-guided bombs in the mission that hit the PRC embassy--and it’s fitting that this week also saw the announcement that the PRC launched its 23rd GPS satellite in its drive for a global system, eventually to include 35 satellites, scheduled for completion in 2020.

As to speculated motives for the bombing, well it gets pretty interesting.  Read the AT story for an overview.  (Teaser!)

Well, here's a hint.  It's got to do with the tremendous shock/wakeup that America got when one of its stealth aircraft got shot down during the Yugoslav war. 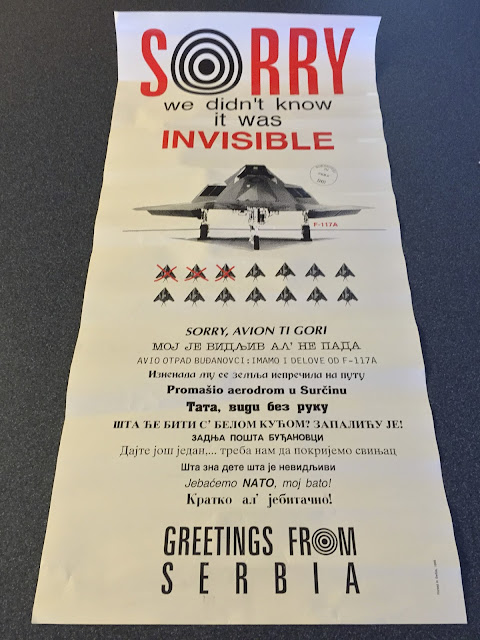 Retailing the Belgrade bombing story has become something of a cottage industry for me.  I’ve covered the event in four lengthy, facty posts on China Matters…

Did you know that you can create short urls with Shortest and receive money for every click on your shortened links.