News flash: war is hell, even when it’s a humanitarian intervention.

It’s pretty clear, listening to today’s NPR report on Libya, that the “no fly zone” is pretty much past the “protect civilian” stage and well into the “kill Libyan soldiers” phase.

Pictures of dead Libyan soldiers seem to be relatively rare, but here’s one, courtesy of KQED: 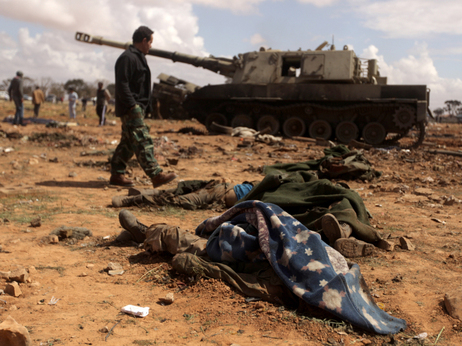 The caption for the photo reads:

The bodies of pro-government forces littered the ground in al-Wayfiyah, 35 km West of Benghazi, after reportedly being hit by French warplanes on Sunday.

NPR’s Eric Westerveldt mentioned passing blown up Libyan army tanks, heavy equipment, and other vehicles as he followed rebel troops westward along the coast towards Sirte.

Sirte is Colonel Gaddafi’s pampered hometown.  It has not experienced significant anti-regime unrest, so it is presumably not a rebel stronghold craving humanitarian intervention.  Instead, the attack represents the first, baby step of the rebels toward NATO-assisted conquest of western Libya.

Westerveldt also reported that Libyan troops had abandoned their uniforms and army vehicles and fled.

Sometimes, when an overextended army does this, it’s because individual soldiers are trying to retreat through hostile territory disguised as civilians to escape opposing ground troops chasing them and revenge-minded partisans behind them.

This doesn’t seem to be the case in Libya.  The threat to the soldiers from partisans—and even the ragtag rebel army in front of them—appears to be minimal.

The most likely explanation is that the soldiers realize that British, French, and possibly American warplanes are targeting Libyan army forces in order to destroy them, regardless of whether they are in ceasefire mode or trying to retreat, withdraw, regroup or whatever.

For the West, it is a race against time—to mete out as much destruction as possible before it is clear that Gaddafi is trying to conform to the UN resolution by moving to a non-aggressive posture, thereby preserving his military and political forces, and creating awkwardness for the coalition with difficult-to-spin demonstrations of (at least temporary) reasonableness, and eliciting unwelcome international calls for cease-fire and mediation.

The aggressive air campaign against the Libyan military seems to go beyond paving the rebel’s path to Tripoli.  It also implies that Western confidence in the fighting mettle of the rebels is limited, and the hope is that Gaddafi’s army will respond to its imminent destruction by turning on Gaddafi and deposing him, thus allowing the West to declare Mission Accomplished! and withdraw.

That seems to me to be an invitation to partition in the short term and reconquest of the east—by whatever neo-Gaddafi finds himself on time of the military pile in Tripoli in the coming weeks--in the long term.

Since we’re being told nothing about the actual objectives or ambitions for the operation—beyond the increasingly threadbare insistence that Libyan “civilians” have to be protected--I suppose my guess is as good as anybody’s.

As cognitive dissonance between the stated aim of “protecting civilians” and the actual practice of  “bombing a retreating army” and “providing air support for a rebel force in its campaign of conquest” sets in, our dedicated and talented reporters and analysts will have their work cut out for them.

My prediction is more rape horror stories like the assault on Iman al-Obeidi, the Libyan woman in Tripoli, and less pictures of dead Libyan soldiers, in order to keep the moral balance firmly tipped in favor of the West and away from Gadaffi.

Well, here’s another rape story, via al Jazeera (which appears to be in 100% lockstep with the aggressive anti-Libya policy of its owner, the Emirate of Qatar):

Several doctors [in the city of Ajdabiya] say they have found Viagra tablets and condoms in the pockets of dead pro-Gaddafi fighters, alleging that they were using rape as a weapon of war.

I don’t doubt that the rape of Iman al-Obeidi actually occurred, by the way.  Many terrible things happen during war, even if it’s called a “humanitarian intervention”.  Rape is one of them.  But accusations of rape are the most useful in dehumanizing an opponent, delegitimizing a regime, and taking the moral sting out of blowing up young men in and out of uniform.

The Guardian got a report from doctors on the other side that will probably gain little traction:

In an obvious journalistic oversight, no report on whether the dead, injured, and demoralized soldiers had Viagra, condoms, or boners in their pockets.

The events along the coast road in Libya put me in mind of another series of turkey shoots—the massacre of Saddam Hussein’s forces in 1991 along Highway 8 and 80 (a.k.a. Highway of Death) after Saddam had accepted the UN resolution and agreed to withdraw from Kuwait, and the slaughter on a causeway in southern Iraq (Battle of Rumaila) after the ceasefire had been declared.

Apparently, prior to a ceasefire, enemy forces are only protected from attack if they are surrendering, stated compliance with a UN resolution notwithstanding.  It was therefore possible to construe Saddam’s withdrawal from Kuwait along Highways 8 and 80 as a “regrouping” for purposes of ordering the assault, something the Libyan military might remember.

There was a concerted U.S, effort to minimize the reported human cost of the attacks on Highways 8 and 80, making the claim that most Iraqi troops abandoned their equipment and were able to flee for their lives in the desert.

Anyway, those rapists had it—“it” being a continuous ten hour attack by US aircraft—coming, according to Stormin’ Norman Schwarzkopf:

The first reason why we bombed the highway coming north out of Kuwait is because there was a great deal of military equipment on that highway, and I had given orders to all my commanders that I wanted every piece of Iraqi equipment that we possibly could destroy. Secondly, this was not a bunch of innocent people just trying to make their way back across the border to Iraq. This was a bunch of rapists, murderers and thugs who had raped and pillaged downtown Kuwait City and now were trying to get out of the country before they were caught.

If, as the official version states, only 800 to 1000 people were killed on the two roads, then photojournalist Peter Turnley was able to photograph an awful lot of them. 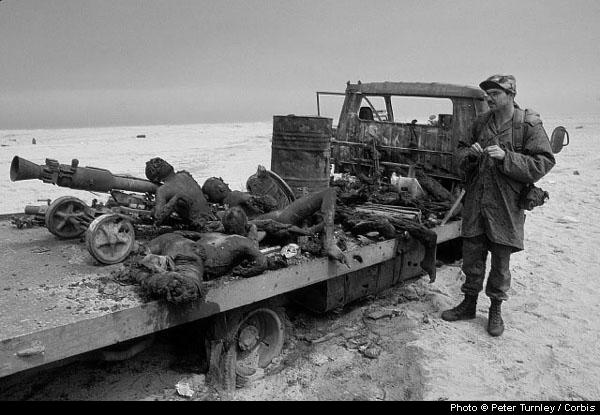 The so-called Battle of Rumaila, which occurred under the command of Major General Barry McCaffrey after the ceasefire and was reported by Seymour Hersh in the New Yorker  is harder to justify and perhaps for that reason is little discussed today.

Also, there apparently aren’t any pictures.

General McCaffrey led the 24th Infantry Division into Iraq in the first Gulf War.  It was a short war without a lot of fighting and of limited value in burnishing the military resume (McCaffrey's division reported 8 deaths in the conflict, perhaps half of which were friendly fire).  The implication that I drew from Hersh’s article is that McCaffrey wanted to have something to show for the deployment of his highly-trained division in Iraq: action, trophies, and renown.

McCaffrey, by the way, came out of the war reasonably well (despite an investigation of his conduct at Rumaila), served as Clinton’s drug czar, and is visible on the teevee today as a military affairs analyst for NBC and MSNBC laboring to make sure that no political capital accrues to President Obama through his Libyan display of militant manliness.

Wikipedia provides some detail on Rumaila:

Iraqi Republican Guards were engaged while attempting to reach and cross the Lake Hammar causeway and escape northward toward Baghdad. Most of the five-mile-long Iraqi caravan of more than 600 vehicles was first boxed into a "kill zone" and then in the course of the next five hours systematically devastated by Hellfire missiles from AH-64 Apache  attack helicopters, indirect artillery fire, and eventually direct fire from arriving armored ground forces, which met no meaningful resistance   The attack continued until the trapped vehicles were destroyed, including at least 39 tanks and 52 other armored vehicles from the elite 1st Armored Division "Hammurabi". McCaffrey reported the elimination of 187 armored vehicles, 43 artillery systems and over 400 trucks. ... A bus with women and children was also reportedly destroyed by a missile, which later troubled many U.S. soldiers.  The battle was one-sided and desperate attempts by some Iraqis to return fire were almost completely ineffective, as during the engagement only one U.S. soldier was injured and two U.S. armored vehicles were lost (an M2 Bradley fighting vehicle and an M1 Abrams tank). A number of Iraqi survivors were taken prisoner, many others fled on foot and swam to safety.

One would speculate that, on one level, the Iraq massacres were perpetrated to prevent Saddam from extracting his army from Kuwait in a relatively intact state so he could fight another day; also, to shake the loyalty of his army and people and make a coup more possible.

The third reason is one that is more difficult to accept.

Soldiers—at least officers--like to fight because it gives them a chance to kill people, “blood” their less experienced troops and commanders with a baptism of fire, and advance their careers.

Advocates of humanitarian intervention might do well to recall that next time they promote one of these adventures.
Posted by China Hand at 1:00 PM

War is the most pornographic thing we humans have ever created. Just another damn fool war of choice to feed the obscene profits of the was industries and the "too big to fail" bankster crooks.

A question - so letting Gaddafi's soldiers into Benghazi to perpetrate an even greater massacre would have been - what, not hell? Or not so much, because we wouldn't have photos of it?

Soldiers and mercenaries for Gaddafi have a choice. They can dump their weapons and choose not to fight for a dictator.

the *ic* [aka the anglophone] had a choice between war n peace.
they rejected the mediation of chavez, ignore kadaffi's plea for an international panel of observers in to find out at first hand whats really going on. the african union's peace delegation was refused entry outright.

see, its not kadaffi who chose violence n it seems that he isnt the one who had something to hide either.

Hellow!
I love your site, it is a pleasure to visit.
I have added your site to my site.
Please link my site to your site.
Thank you!

Spot on article. Fantastic. Only shame it doesn't say who is the author but I've read for a while so will read more from this site.

You're such a gifted article writer, I've read several articles written about this subject and none came close to yours. Keep them coming!
Fish Mox

It's quite interesting, I've ever quite understand this matter but now thanks to you I do. I can't wait to read more articles from you.
lawsuits against zoloft

I thought I would leave my first comment. I don’t know what to say except that I have enjoyed reading.