Update:  Japan announced its acceptance of the South Korean ADIZ.  The Japanese government statement involved some complicated parsing to reconcile its acceptance of the ROK zone with its rejection of the PRC zone.  Japan stated that the ROK zone does not impinge on airspace over territories effectively controlled by Japan, and Japan does not assert ADIZ over airspace of territories of which it does not exercise administrative control (like the islands north of Hokkaido).  But Japan is apparently still maintaining its ADIZ over Ieodo since it is an underwater reef and not a territorial feature.  As for the ROK, its ADIZ extends over territory it does not control i.e. North Korea for very good reasons of national security that reflect the baseline intention of the ADIZ: early warning in case of attack.  So the PRC, if somewhat discombobulated by the ROK initiative, can push back against Japan's attempt to redefine the appropriate scope of an ADIZ in order to leverage its administrative control of the Senkakus.  And, by not pulling back from Ieodo, Japan did not provide any incentive or pressure for the PRC to reconsider the inclusion of Ieodo in its ADIZ.  CH--12/9/13

As is well known, South Korea responded to the PRC's declaration of its ADIZ by expanding its own.  As is less known, the PRC had consulted with the ROK prior to declaring its ADIZ, presumably with the expectation that South Korea would not create issues of its own as the PRC girded for the firestorm of opposition it could expect from the Japan and US. 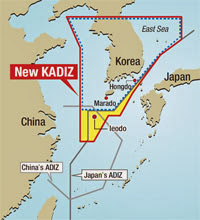 And I think the PRC was blindsided--and a little put out--by the ROK's decision.  Maybe Japan was, too.

South Korea cautiously justified the expansion with the pretext of bringing its ADIZ in conformance with its FIR.

The FIR--or Flight Information Region, for those of you not besotted by acronyms--is a zone defined by the International Civil Aviation Organization.  Inside that zone, a certain facility is designated to supply radio contact, meteorological information, etc. for the convenience and safety of civilian air traffic through the region.

Like the ADIZ, the FIR doesn't involve any declarations of sovereignty. 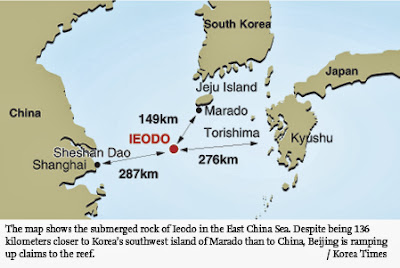 South Korea's new ADIZ--called the KADIZ--overlaps with the PRC ADIZ--now called the CADIZ--and the Japanese ADIZ--I don't know if it's called the JADIZ yet, but I wouldn't be surprised-- over the airspace of a contested underwater reef (Ieodo to the ROK, Suyan to the PRC, Socotra Rock to its legion of admirers in the West).

It should be said that the newly-minted PRC ADIZ can be spun plausibly as an air defense zone addressing the not unreasonable expection of hostile Japanese action.  On the other hand, South Korea's expansion of its existing ADIZ, which had apparently served it adequately since the Korean War, clearly has no purpose other than to make a statement about Ieodo.

According to Korea Times, the Ieodo issue had come up during defense talks between the PRC and ROK two weeks ago and the Chinese side had declined to heed ROK objections to extension of the ADIZ over the reef area.  So I guess after the Japanese objection, the ROK felt it had enough cover to put the boot in itself.

Korea Times' coverage included this interesting tidbit, implying that the ROK was also taking advantage of the Chinese move to execute its own long-desired expansion of its KADIZ--opposed by Japan since 1963!  (Interestingly, the ROK had declined to exercise its right to unilaterally extend its ADIZ til now; maybe it thought the Chinese brouhaha provided a distraction and opportunity to finesse the extension past the Japanese that was too good to pass up.  Wonder what the US military had to say about this.)  It will be interesting to see how this plays out:

As for Japan, it has also turned down Korea’s adjustment requests since 1963, and last week, the lower house of the Diet adopted a resolution urging China to rescind its CADIZ. A similar reaction is expected to come regarding Korea’s new air zone.


The fact that the KADIZ, like the CADIZ, covers disputed islands caused, I think, a certain amount of brainhurt to the Western punditocracy.  Two virtually identical moves.  But one must be vociferously condemned.  The other must be praised.

Reuters reported that the PRC had expressed "regret" over the ROK's announcement of the KADIZ.

This, to me, would be something of a big and interesting deal, since the whole Chinese "nothing to see here" insouciance concerning the CADIZ would seem to mandate that it could not gripe about somebody else expanding its ADIZ to cover airspace over contested areas.

Question: According to reports, the ROK Ministry of Defense announced on Dec. 8 its plan to expand the KADIZ.  The scope of the zone would be extended to include the airspace above the Suyan Reef...

As to the Suyan Islands, from the beginning we have emphasized, the ADIZ is not territorial airspace.  It is an identification and early warning zone set up by a party outside its territorial airspace, and is unrelated to sea or air administrative authority.  The Suyan Reef is a free-standing underwater reef, it is not territory.  There is no territorial dispute between China and the ROK on this matter.  This is the mutual understanding of the Chinese and Korean sides.  The Suyan Reef is located at the overlap of the PRC and ROK Exclusive Economic Zones, and the relevant matters can only be decided through delineation of maritime areas.

Reading between the lines, when the PRC showed the ROK the boundaries of the proposed CADIZ, the South Koreans objected because it covered Ieodo.  The Chinese blandly blew them off with the excuse that the zone had nothing to do with sovereignty.

But maybe the Koreans were disgruntled, thinking, if that's the case, then does the zone just happen to extend over Ieodo and the Senkakus?  What about using this opening to slip their long-standing desire to expand their KADIZ past Japan?  So they rethought their previous acquiescence and went tit for tat, thereby bringing the contested island issue to the fore and providing some aid and comfort to the Japanese position that the Chinese move was worthy of heightened concern and response--something I think the PRC had expected to avoid by previewing the zone to the ROK.

So I interpret the PRC's "regret" as to the fact that it understood that the ROK--perhaps constrained by long standing Japanese opposition--would be passive about the CADIZ and not muddy the airspace issue with any fiddling on the KADIZ.  But the Korean side saw an opportunity to upgrade their own KADIZ, changed their minds and decided to get into the PRC's face.   Hong Lei's statement is perhaps an oblique rebuke to the ROK for creating problems on an issue the PRC thought was safely side-pocketed.


According to this useful backgrounder from Korea Times, the Ieodo/Suyan Reef is contested by Japan as well as the ROK and PRC, but it seems the focus of negotiations are between China and South Korea.  The ROK has sought to buttress its claim by building a observation station on the submerged reef.

I should say that, based on my understanding, the Korean position that China hopes that administration of an EEZ confers the right to exclude foreign naval vessels may be off-base.  The United States has made it clear, in the strongest possible terms and with convincing legal jaw-jaw, that naval operations, even those that might be construed as impacting the security of the EEZ owner (such as the survey missions of the USN Impeccable tracking PLAN subs in the PRC EEZ), are not barred by the Law of the Sea Treaty.  Given the thicket of Japanese, Korean, Philippine, and Vietnamese EEZs circling China, I think that position is more useful to China in its maritime ambitions than the converse.

So if the ROK believes that it will gain security leverage over the PRC if it holds on to the reef, I think it will be disappointed.


All illustrations from Korea Times