Should the US Play Solomon and Split the Senkakus?


I have grown pretty tired of hearing about the Senkakus.  I have a feeling I’m not alone.

As far as I can see, Taiwan has the strongest claim to the Senkakus, by geography, geology,  history, and propinquity.  Japan grabbed the Senkakus in 1895, lost them in World War II, then got them back from the U.S. Occupation as a sloppily-executed, legally dubious afterthought.  But it’s got ‘em.  The PRC, by speaking for Taiwan under the one-China policy, is in OK shape as a matter of logic and equity, but hampered by the fact that nobody wants to see big, bad China get a win at Japan’s expense.

The Senkakus have turned into an American headache.

Japan makes an issue of the Senkakus to goad the PRC and use the ensuing uproar to justify Japan’s emergence as a full-fledged regional military power.

So the United States is on a cleft stick as far as the Senkakus are concerned.

I don’t think the Obama administration, as suggested by Shisaku’s Michael Cucek, is interested in coming down on Japan’s side and confirming Japanese sovereignty over the Senkakus at China’s expense.  Beyond the unpleasant prospect of having the PRC really, really mad at us, the PRC will make the United States pay for its decision, probably by punishing Japan in ways that reveal the limits of American power to protect it—like the anti-Japanese economic warfare of 2012—and marginalizes the US in Asia.

My suggestion:  the United States, as the responsible hyperpower always sedulously concerned with regional peace and stability, should propose that the Senkakus be split between Japan and the PRC.

There are, to my understanding five uninhabited islands and three barren rocks.  Total eight things.  I suggest each side get four things on opposite sides of a line.  That gives the United States the ability to unambiguously support Japanese sovereignty over here, and Chinese sovereignty over there.  Here's one possibility. 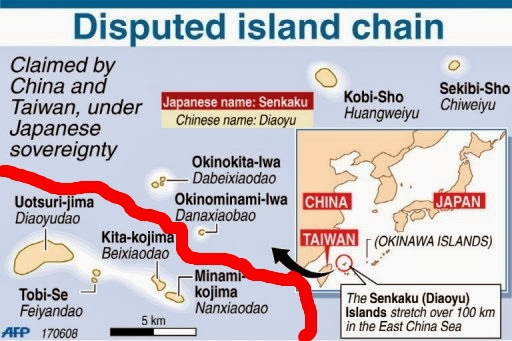 Like that red line?  Took me less than two minutes.

Bear in mind that the Japanese government is contemplating a similar 50/50 split in an effort to resolve its endless dispute with Russia over the Northern Islands.

The Japanese would be angry with us, but so would the Chinese.  But it’s better to be hated as high-handed imperial lawgivers than resented as handwringing bystanders.

As to the immense fishery and energy resources supposedly contained in the sea surrounding the islands, forget about efficient joint development.  What’s on this side of the line is yours, on that side mine.  Let each side plunder the resources until the fish are gone, the basins are exhausted, and there is no reason to pretend to be interested in these ridiculous rocks.

I think this initiative is not for the ostentatiously cerebral President Obama.  It’s a job for diplomatic blunderbuss Joe Biden or gaffe-guru John Kerry, maybe pontificating at some confab at the Center for a New American Security, standing in front of a big map of the Senkakus and making a sweeping gesture.

Little does he realize he is holding an uncapped marker in his hand, creating a bold and highly suggestive line splitting the eight islets and rocks.  The assembled politicians, pundits, and diplomats step back with an involuntary gasp of astonished awe…