Japanese Prime Minister Shinzo Abe said, in remarks published Sunday, that he expected his country to be playing a more assertive security role throughout "the entire world" -- and have a new constitution to back this ambition.

…Punch line is, this AFP article (including the headline used as the title of this post) is datelined April 22, 2007, during Abe’s brief, first prime ministership.

In 2007 PRC "assertiveness" was not on the table.  In fact, at that time the George W. Bush administration was looking forlornly for the PRC’s help on the intractable North Korean issue.  The problem, in other words, was not that China wasn’t being “assertive”; it was that the PRC was being insufficiently “assertive” in stepping up on the world stage and shouldering its “responsible stakeholder” obligations, a phrase that has rather ironically evaporated from the State Department’s China-bashing lexicon in recent years.

Without an easily exploitable China menace, Prime Minister Abe, in order to peddle his constitutional revision nostrums and enable the projection of Japanese power beyond the nation’s boundaries, had to lean on the relatively slender reeds of the a) the North Korean menace b) global terrorism.

Meanwhile this year, Japan converted its defense agency into a formal ministry of defense, a move that was interpreted by many as a clear indication of the Abe government's intent to free itself from some of the shackles of the post-war, US-authored constitution.

When asked about his plans, the prime minister said there were provisions in the constitution "that no longer suit the times."

"The security environment surrounding Japan and the entire world has undergone major change," he explained. "There has been proliferation of weapons of mass destruction, the fight against terrorism and regional conflicts arising here and there."


Certainly, the Abe of 2007, like the Abe of 2013-14, always had rising China at the back of his mind.  In 2007, Abe was very much in step with the China-containment preoccupations of Vice President Dick Cheney, who went rogue and, with Abe’s support, attempted to cobble together an informal alliance of India, Australia, Japan, and the United States to confront the Chicom menace.

However, it should be remembered (and I find it just a touch frustrating that it isn’t) that the first “assertive” power in East Asia was Japan, not the PRC.  In fact, a lot of what went on in the South China Sea and the Senkakus--especially the ruckus surrounding the inflammatory decision to detain and try Captain Zhan in Japan, and the nationalization of three of the Senkakus--could be construed as Chinese reaction to a more assertive Japanese posture.  That makes recent headlines like these look less like reporting and more like ahistorical special pleading on behalf of the Japanese defense buildup:

Japan to beef up defense due to assertive China, review arms embargo

First, Japan is “assertive”.  It has been at least since 2007.  After Abe left office and Seiji Maehara was running the foreign affairs show, Japan was assertive.  Now with Abe back, Japan is still assertive.

Second, Japan’s determination to revolutionize its military posture--convert its Self Defense Forces into a conventional military, conduct a sizable military buildup, underwrite the security posture of several Pacific countries, return to arms exports for the first time in fifty years, allow pre-emptive strikes against North Korea and, if and when the pacifist constitution is revised, conclude collective security agreements with key Asian allies--is considerably more destabilizing than the PRC’s intransigence on the various inconsequential and long-standing border disputes with its neighbors.

I should say that I am, perhaps remarkably, not opposed to Japan’s determination to restore its full national sovereignty in matters of what is euphemistically called “defense” or “security” or, in Abe’s magnificent formulation, “active pacifism” and what I call "blowing things up and killing people" a.k.a. “overseas warmaking capabilities”.  This is an ineluctable process, indeed spurred by Japan’s unwillingness to exist as a second-class citizen in East Asia in China’s shadow relying on PRC sufferance for its economic and national security.

However, the return of the world’s fifth largest military to an explicit warfighting role creates major security stresses for the region and the world, and I am honestly baffled by the idea that the United States and the rest of the region, including China, do not have a legitimate interest in explicitly mediating Japan’s military transition.

The idea that Japan, by virtue of the fact that it is a democracy and key U.S. ally, should be exempt from such concerns and, instead, the “assertive China threat” should be mindlessly peddled as an excuse for a Japanese policy that is fundamentally active, not reactive, is to me, extremely questionable.

For one thing, the idea that democracies are inherently more peaceful than authoritarian regimes is a canard that I think is ready for retirement.  Democracies are politically and socially more robust than authoritarian regimes and can handle the stresses of war much better, especially since the current recipe calls for fewer boots on the ground and a healthy dose of stand-off munitions and death a la drone instead.  Saddam Hussein was a serial warmonger, but when was the last time Kim Jung Un, Vladimir Putin*, Muammar Qaddafi—or for that matter, the PRC leadership—started a war?  And who has a pretty good track record for starting wars over the last fifteen years?  I think you get my point.

For that matter, PM Abe’s inclinations tend toward the LDP oligarch end of the spectrum, with a strong dash of nationalism and a streak of authoritarianism.  The LDP’s current good fortune in holding veto-proof majorities in both legislative branches and competing with opposition parties that are in complete disarray imply that democratic checks will not be decisive over the next couple years.

Finally, I’ve argued repeatedly and I think persuasively that Japan’s ambitions toward security independence undercut the argument that Japan will serve as a tractable ally.  Instead, I see Japan enlarging its capacity to advance its own national goals by leveraging U.S. diplomatic and military support—and by using and cultivating tensions with the PRC to smooth the way.  The United States, by hyping the China threat, particularly under Secretary Clinton, has brought this problem on itself to a certain extent.

“Assertive” Japan exists.  Get used to it and, if possible, deal with it.

[*]  No, Russia did not start the Russia-Georgia War in 2007.  The other guy did.  I find it amusing that the West, led by the US, immediately pledged $4.5 billion—including $2 billion in grants, not loans-- to Georgia to help it rebuild after losing the war it had itself started.  In fact, the World Bank had estimated that only $3.2 billion was needed since the bulk of the destruction occurred in the breakaway region of Ossetia, which bore the brunt of the Georgian attack.

So I guess that the extra $1.3 billion in pledges were meant to reward Georgia for its otherwise unproductive loyalty to the EU, the Western bloc, and the United States.  “Assertiveness” has its privileges, for some countries, anyway. 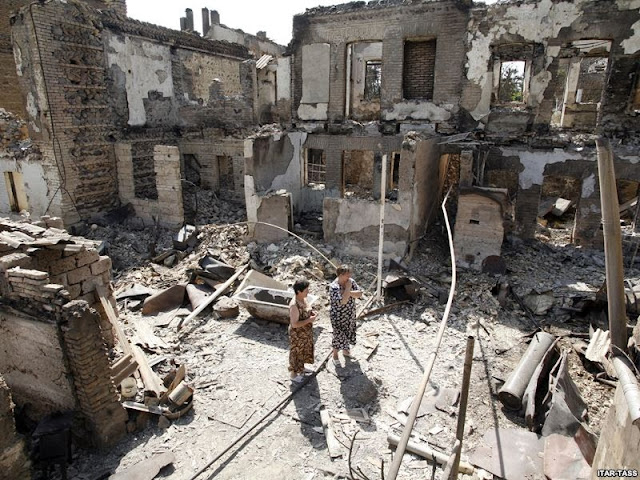 The Russians got the job of rebuilding Tskhinval, the town in breakaway Ossetia that the Georgians had largely leveled during the attack; that cost somewhere around 8 billion rubles.

Photo of post-war Tskhinval from ITAR-TASS