Amy Chua has attracted a lot of Internet heat for her chronicle of her drive for achievement at almost any cost in the child-rearing department in Battle Hymn of the Tiger Mom (famously refusing her daughter bathroom or water breaks until she mastered a tricky piano exercise).

certain "cultural" (they avoid the words "racial" or "ethnic") groups succeed in the US. The list includes Jews, Cubans, Nigerians, Mormons, Indians, Iranians and Lebanese-Americans and the three traits they share, (the "triple package") are, apparently, "superiority complex, insecurity and impulse control".

Hmmm.  Chua's theories came to mind as I was reading Joseph Mitchell’s New Yorker nonfiction pieces collected in Up In the Old Hotel.  In “Evening with a Gifted Child,” written in 1940, Mitchell describes a visit with a beautiful nine year old child, Philippa Duke Schuyler.  Philippa had an IQ of 185, played the piano superbly, and in Mitchell’s eyes appeared perfect in every way.

Her father, George Schuyler, was African-American and journalist of note; her mother a white woman from Texas, Josephine Cogdell.  It appears that the mother believed that hybrid vigor—the exceptional performance of the offspring of diverse genetic lines—might apply to children as well as corn. This seems to have played a significant role in her determination to cross color lines and marry George Schuyler.  She also believed that Philippa should eat only raw foods—raw meat, raw fish, nuts—and no sugar.  Under her tutelage, Philippa maintained an exhaustive, not to say exhausting, curriculum of study, self-improvement, and achievement.

Josephine Schuyler took pains to disassociate herself from what we today might term “Tiger Mom” behavior, telling Mitchell: “Women often tell me, ‘You mustn’t push her!’  Their sympathy is misplaced.  If there’s any pushing done, she’s the one that does it.”

Philippa Schuyler enjoyed considerable success as a concert pianist and composer, and became an admired symbol of black achievement around the world.  She is remembered today by the Philippa Schuyler public school in Brooklyn, New York.

However, her career plateaued and she appears to have entered a period of emotional and sexual turmoil and racial ambivalence.  In a 1995 New York Times review of a biography of Schuyler, Composition in Black and White, by Kathryn Talalay, Phyllis Rose wrote:

[S]he came in the end to play the role of the tragic mulatto, at home nowhere, yearning to be "accepted as a person, not as a strange curiosity." She started passing for white in 1959, at first so she could travel in South Africa, later thinking that she might have a better career as a white performer. She invented another persona, Felipa Monterro y Schuyler, who was white, and as Miss Monterro played well-reviewed concerts in Europe and gave a lecture tour in America. Unsurprisingly, this deception proved too difficult to sustain.

And Philippa Schuyler also harbored, together with her affection, a resentment of her mother, the kind that Tiger Moms, deep in their hearts, perhaps dread more than anything else.

Having reinvented herself with some success as a journalist and advocate for conservative religious and social causes (her father became a resolute John Bircher, I daresay one of the few African-Americans in the organization) Philippa Schuyler died in a helicopter crash in Vietnam in 1967 at the age of 35. Devastated by her loss and in declining health, Josephine Schuyler committed suicide two years later.

Philippa Schuyler is the subject of a detailed and extensively illustrated appreciation at the music blog Overgrown Path.  The Internets also tell me that Alicia Keyes has been ruminating on a Philippa Schuyler biopic.

George Schuyler is the subject of a full length biography by Oscar Renal Williams.  Josephine Cogdell Schuyler’s story receives a sympathetic account in a recent book by Carla Kaplan on the “White Women of the Black Renaissance”. 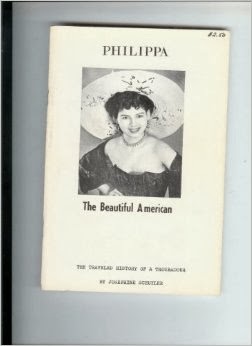 On Amazon I found a memorial volume of Philippa Schuyler’s life written by her mother: Philippa, the beautiful American.

Josephine Schuyler's tribute to her prodigal daughter, published several years after Philippa's tragic death. … A musical prodigy, a journalist, an author, a world traveller, Philippa's life is American history, her last 10 years American legend. But, leaving a contrarian legacy too harsh to harness to any conventional narrative (she was a fundamentalist Catholic, her father hated Martin Luther King), her death left her father (journalism giant George Schuyler) and mother devastated and herself forgotten. Josephine committed suicide the month this was published. From a limited edition of 1000 copies. Large pamphlet of poetry and photographs. May 1969. With respect for her faith and beliefs, and in absolute awe of her achievements, Amen.


One can’t generalize about stories like this; nor should one trivialize them.  I’ll remember that—and Philippa Schuyler and Josephine and George Schuyler—the next time the Amy Chua tornado touches down.

You could be eligible for a complimentary $1,000 Amazon Gift Card.

Get daily suggestions and instructions for making THOUSANDS OF DOLLARS per day ONLINE totally FREE.
GET FREE ACCESS INSTANLY

Professional trading signals sent to your mobile phone every day.

Hello, my fellow students! Stuck on the titling stage while writing an essay? Check out this great list of essay titles and pick one for yourself!