The Key to Arctic Survival: Improvised Implements of Excrement

In recent days the Internet has been justifiably besotted by this magnificent 1947 photo (by Irving Penn) of Peter Freuchen and his wife. 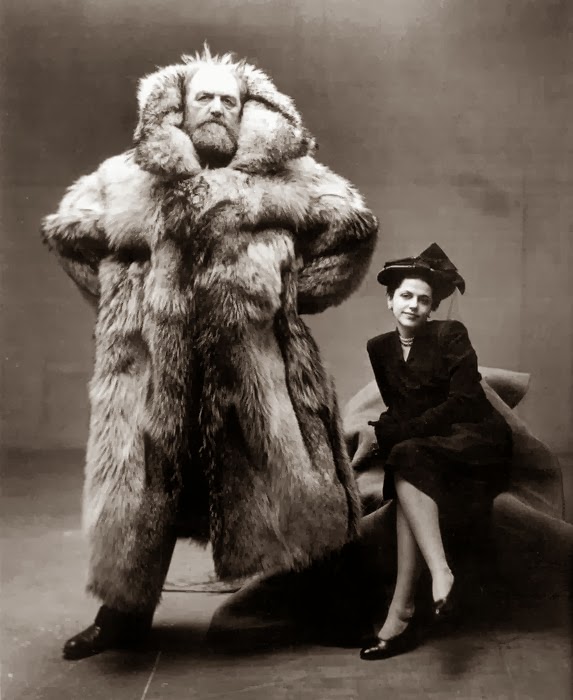 Freuchen was one of the great Arctic explorers, celebrity adventurers, and authors of the pre-World War II period.  Among his many other achievements, in 1910 he helped found--and named--the outpost at Thule in northern Greenland, now site of the immense US military base. 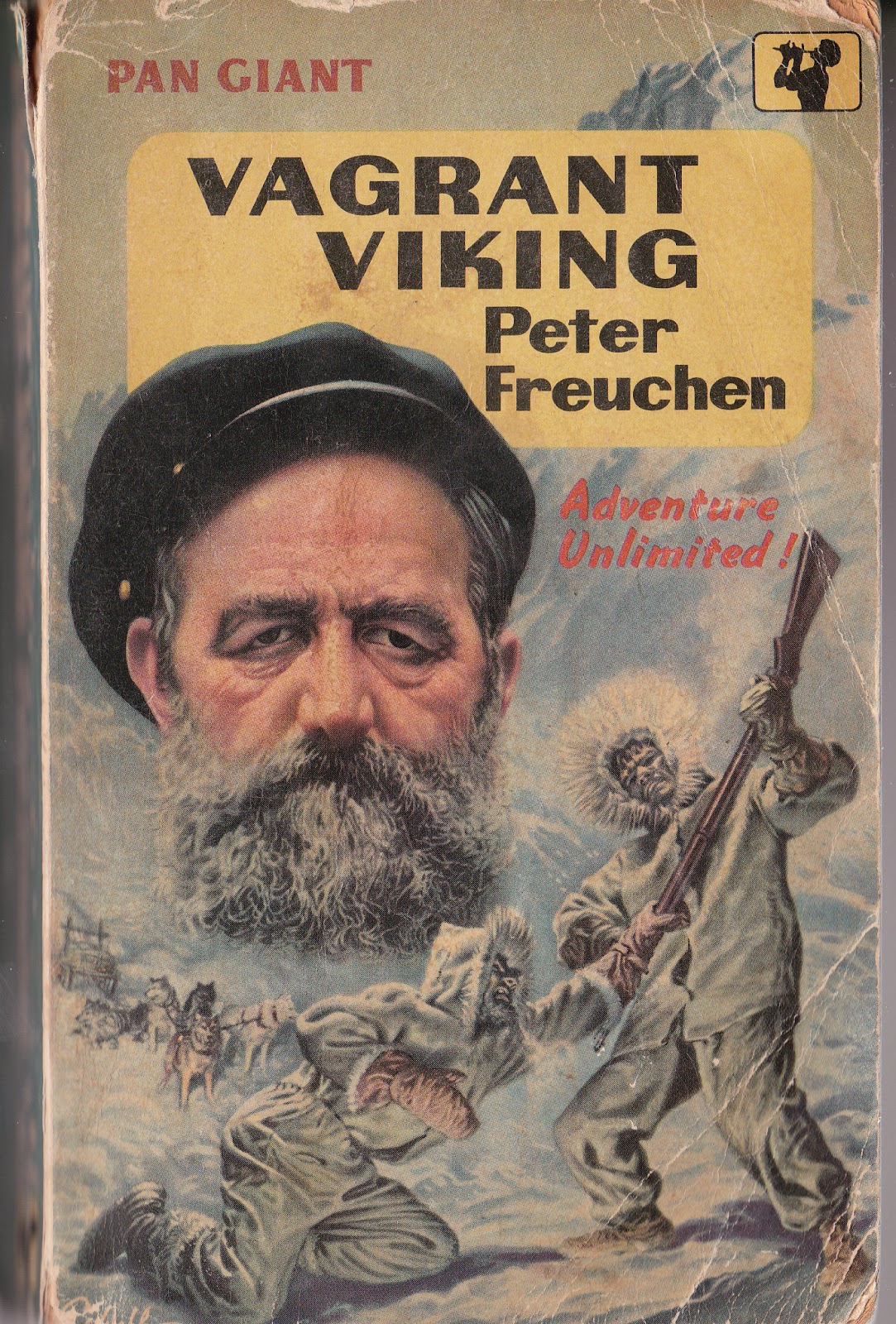 Freuchen’s autobiography, Vagrant Viking (full text available on-line here but without the magnificent cover art of my 3/6 Pan paperback), vividly describes his life, starting when he was a restless, unhappy youth driven to get out of the ordinary world into the wide open spaces of the north.  Perhaps the most memorable anecdote in the book concerns his harrowing escape from a coffin-sized tomb of ice and snow that had immobilized him as he sheltered in a snowbank to wait out a storm.

After hours of struggle, which included Freuchen’s futile attempts to claw his way out with his bare hands and with a frozen bearskin, and tearing out much of his beard as it froze to the runners of the sled that formed the roof of his prison…

What a way to die…I gave up once more and let the hours pass without another move.  But I recovered my strength while I rested and my morale improved.  I was alive after all.  I had not eaten for hours, but my digestion felt all right.  I got a new idea!

I had often seen dog’s dung in the sled track and had noticed that it would freeze as solid as a rock.  Would not the cold have the same effect on human discharge?  Repulsive as the thought was, I decided to try the experiment.  I moved my bowels and from the excrement I managed to fashion a chisel-like instrument which I left to freeze…I was patient.  I did not want to risk breaking my new tool by using it too soon…At last I decided to try my chisel and it worked!

Long story short, Freuchen extricates himself with the help of his improvised chisel after about thirty hours of confinement, and crawls three hours back to camp.  Crawling, because his feet are frostbitten.  After he gets back to camp, gangrene sets in on one foot.  The standard Eskimo remedy—a poultice of bloody lemming skin—stops the gangrene by peeling all the flesh and muscle off his toes.  Freuchen is understandably dismayed by the skeletal appearance of his ravaged foot.  Less understandably, he decides to do something about it, amputating his toes himself with a big pair of pincers and a hammer.  Freuchen was a teetotaler, so no anesthetic was apparently involved.

The episode is a perfect illustration of the impulsiveness, determination, and McGyveresque ingenuity that drove Freuchen to adventure and survive in Greenland. 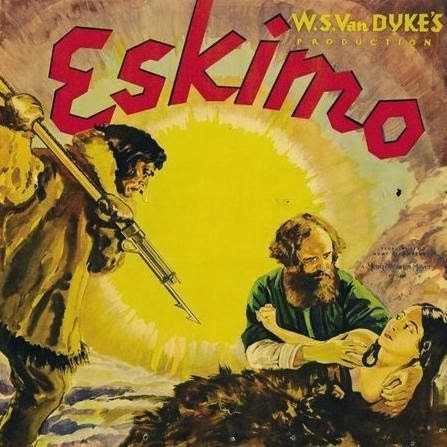 Hollywood came calling in the early 1930s and Freuchen served as advisor and castmember for Eskimo, which was shot on location over two years in the native Inuit language (thankfully supplemented by English-language intertitles) spoken by a largely indigenous cast.  This colorful but rather clumsy poster does not clearly convey the fact that the solicitous-looking Freuchen is the designated villain of the piece.

The movie failed to find an audience, even when salaciously repackaged as “Eskimo Wife Traders”, and put paid to Freuchen’s brief screenwriting career.  The charismatic Freuchen made his mark in Hollywood, however, befriending Jean Harlow and, on one memorable occasion, lifting the Platinum Bombshell up over his head in a two-arm press and twirling her over a Hollywood party to the delight of Harlow herself, and guests and photographers.  The following Monday, Louis Mayer personally called Freuchen on the carpet to castigate him for imperiling Harlow’s reputation and career.  Freuchen is too much of a gentleman to mention it, but apparently the photographs on Mayer’s desk persuasively documented Harlow’s lifelong disinterest in wearing underwear.

Lifting attractive women over his head was part of the 6’7” Freuchen’s modus operandi.  He incensed Leni Reifenstahl’s Nazi minder by giving Hitler’s favorite filmmaker a toss for a photo op at Eskimo’s Berlin premier.  (Parenthetically, Freuchen, a resolute anti-Nazi, distinguished himself in the Danish resistance during WWII.)

Here’s a nice post on Freuchen, the photo, and the woman he’s with (his third wife, Dagmar Freuchen-Gale, a noted artist) at kottke.org  It includes a clip documenting part of Freuchen’s successful run on the $64,000 Question.

The plausibility of Freuchen’s story (about the chisel, not Jean Harlow) is bolstered by an interview which Wade Davis, the anthropologist of The Serpent and the Rainbow fame, gave to Discover Magazine in 2008. Davis recounted:

During the 1950s the Canadian government forced the Inuit into settlements. A family from Arctic Bay told me this fantastic story of their grandfather who refused to go. The family, fearful for his life, took away all of his tools and all of his implements, thinking that would force him into the settlement. But instead, he just slipped out of an igloo on a cold Arctic night, pulled down his caribou and sealskin trousers, and defecated into his hand. As the feces began to freeze, he shaped it into the form of an implement. And when the blade started to take shape, he put a spray of saliva along the leading edge to sharpen it. That’s when what they call the “shit knife” took form. He used it to butcher a dog. Skinned the dog with it. Improvised a sled with the dog’s rib cage, and then, using the skin, he harnessed up an adjacent living dog. He put the shit knife in his belt and disappeared into the night.  Then he built a boat of poo and sailed to Hawaii.  Almost.


OK, I made up the last part about the boat.  But the rest is verbatim from Davis.

I suppose the moral is, Where there’s crap…there’s hope!

If you need your ex-girlfriend or ex-boyfriend to come crawling back to you on their knees (no matter why you broke up) you must watch this video
right away...