South China Sea: How Many Battalions Does the Passive Voice Have?

Claims disputes pervade maritime Asia. All parties must be prevented from use force/threat thereof to alter status quo.

To paraphrase Napoleon on the Pope, how many battalions does the frickin’ passive voice have?

“Must be prevented”.  That’s the problem with the pivot.

The pivot expresses the hope that the PRC will mistake a US preference for an national doctrine, construe the US desire to make mischief for the PRC in its near beyond as a matter of existential resolve, and do the United States the courtesy of dignifying Washington’s expressions of disapproval as a deterrent.

The PRC, on the other hand, has a genuine doctrine: its territorial integrity is an existential issue.  And it has openly applied it to the South China Sea.

I might point out that the PRC tried to make its South China Sea priorities a matter of engagement with the United States (remember the “core interest” kerfuffle?), but Hillary Clinton instead, oh so cleverly, turned the issue on its head as a matter of Chinese aggression, and made support for the PRC’s South China Sea adversaries into the keystone of the pivot.

So those chickens have come home to roost.  As the United States committed fully to the pivot architecture, the PRC has decided to flout the US deterrent by moving the HYSY 981 into Vietnam’s claimed EEZ and so far the US response has been…extremely muted.

I expect that President Obama is loath to pile a PRC crisis on top of his Russian crisis.

I also suspect that the United States did not have a riposte ready in its well-financed, exhaustively think-tanked China strategy for a PRC provocation like this.

Perhaps the US was lazily assuming that the PRC, its military completely overmatched by the United States’, would never have the gumption to test the US deterrent.

In any case, there it is.

Undoubtedly, the US foreign policy apparatus is working up a portfolio of appropriately muscular options for President Obama, all the way from blasting the HYSY 981 out of the water to sailing the USSN Ronald Reagan et. al. through the Chinese flotilla, to joint patrols with the Philippine navy/coast guard, to drawing a red line in the waters of the South China Sea…

Anyway, I think the PRC is determined to show that its determination and staying power exceed that of the United States in South China Sea jostling up to the point of military confrontation.

And maybe even including war, if a feisty op-ed in Global Times is taken at face value:

It's a demanding and risky job to let other countries get used to China's rise and treat China as a major power. Vietnam and the Philippines, which haven't updated their knowledge about China, still cherish the illusion that China can simply be forced back by pressure.

China's interests are beyond the South China Sea. It must strike a balance between securing its territorial waters and maintaining a vibrant growth trend.

China faces a dilemma with its growing power. On the one hand, it will be confronted by neighbors like Vietnam, the Philippines and Japan, and other stakeholders like the US if it makes use of its power.

On the other, if China conceals its power, its determination to safeguard territorial integrity will be underestimated, which would further foster the unscrupulousness of countries like Vietnam, the Philippines and Japan.
…
China has taken the first assertive step in securing its territorial integrity in the South China Sea, and in the meantime faces strong protests from Hanoi and Manila, and obvious bias from the US. China's diplomatic risks are rising, but these are the costs that have to be borne as China becomes more powerful.

The South China Sea disputes should be settled in a peaceful manner, but that doesn't mean China can't resort to non-peaceful measures in the face of provocation from Vietnam and the Philippines. Many people believe that a forced war would convince some countries of China's sincerely peaceful intentions, but it is also highly likely that China's strategy would face more uncertainties.

There are some off ramps for the current crisis short of a direct mano-a-mano confrontation between the US and the PRC.

Vietnam, the United States, et. al. might simply suck it up and limit themselves to verbal castigation of the PRC until August 15, when the HYSY 981-zilla is due to lumber off.

Or Vietnam will decide that capitulation is the better part of valor, heed PRC calls for bilateral talks and, in bad news for the Philippines, contribute to the further fracturing of the shaky South China Sea anti-PRC United Front.

I suspect that the PRC has put an attractive pile of economic carrots on the table together with the HSYS 981 stick, and Vietnam is currently weighing the psychic benefits of partnership in an anti-Chinese alliance with the economic benefits that might accrue from expanded PRC trade and investment.

I think in the medium term, Vietnam will come to the conclusion that existential, war-worthy interests for the United States are not identical with those of any other nation in Asia, including Japan, and the most credible deterrent is one that it is in the control of Vietnam.

I’m sure France would be interested in obliging Vietnam with the sale of a few ship (and platform)-killing missiles that might make the PRC think twice before it engages in tomfoolery in Vietnam’s offshore near beyond.

And that, I think, is how the PRC’s leadership sees the endgame playing out.  Asian powers become richer, stronger, and more independent of the United States.  And the United States, anxious for regional influence, eventually comes back to the PRC…

Anyway, moving from the general to the particular, there’s an apparent PRC building program on Johnson South Reef, a formation that the Philippines considers inside its 200 nm EEZ.

The Philippines released photos that appear to show a dredge pumping up sand to expand the above surface area of the reef.  The Philippine foreign ministry accused the PRC of violating the stand-still agreement negotiated with ASEAN.  According to AFP, the PRC for its part acknowledged work was going on but it was just “renovation” of facilities for Chinese troops stationed on the reef, presumably claiming that its work therefore doesn’t violate the standstill agreement.

Interestingly, the PRC had actually established itself at Johnson South Reef after a skirmish with Vietnam, not the Philippines, in 1988, at a time when both Vietnam and PRC were both racing to occupy the reef.  Vietnam, thanks to its “flying rectangle”—an EEZ claim only slightly less risible than the Chinese “cow tongue”—claims many of the islands that are also subject to PRC-Philippine wrangling.

As a reminder to readers of the folly of turning the South China Sea into an internationalized issue, here is the map of what I call the “salad bowl” of Spratly sovereignty claims, courtesy of Wikipedia.  Remember, EEZs can’t be defined until sovereignty is agreed—and there is no accepted multi-lateral mechanism for determining sovereignty. As to the motive for the Chinese jiggery-pokery on Johnson Second Reef, the Philippines raised the specter of airfield construction and, by implication, enhancement of the PRC military threat to adjacent Philippine claims.

It is apparently unlikely that an airfield that could contribute significantly to the PRC military presence in the islands could be constructed on the reef.

For a more likely explanation of PRC intentions, let us turn to…Okinotorishima Island!

Long story short, Okoritorishima Island was the occasion for an exercise of EEZ aggrandizement by Japan, abetted for some reason by the complaisant solons of the UNCLOS Commission on the Limits of the Continental Shelf.

The PRC has cast a stern and disapproving eye on the Okinotorishima exercise.  The information and illustrations below, unless otherwise acknowledged, are from a presentation by Julia Xue of Qingdao Ocean University at a conference in Washington, D.C. in 2010.

The two Okinotorishima islands, 1700 km SSW from Tokyo and a good 700 km from the nearest inhabited Japanese territory, were not impressive in their original form.  One lump was 4.7 meters across, the other 2.6 meters across.  And they were clearly eroding and not long for the above-surface world unless steps were taken: 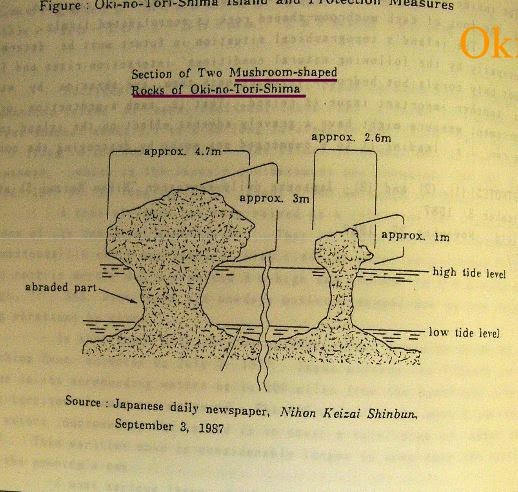 Through an intensive application of resources i.e. $600 million dollars to build a protective cofferdam around the islands, sheath the islands itself, and construct a platform, the rocks were transformed into this: 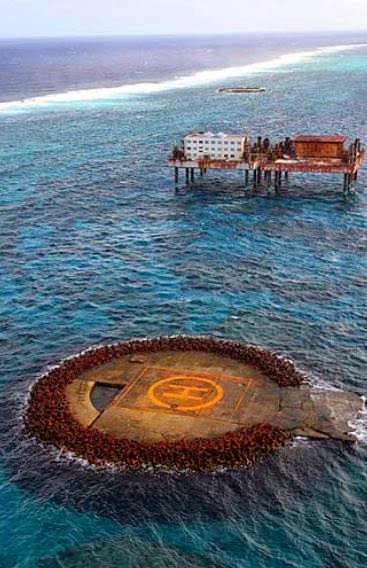 Here is Shintaro Ishihara, everybody’s favorite advocate of island restraint, standing on one of the islands of Okinotorishima. 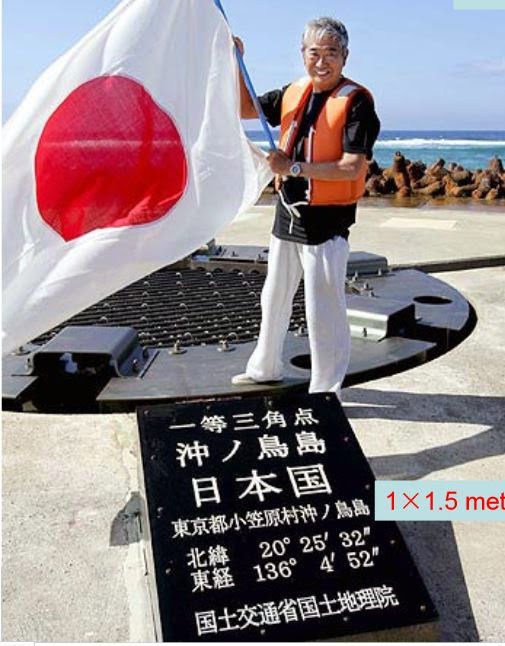 And kneeling on the island to kiss the sacred territory: 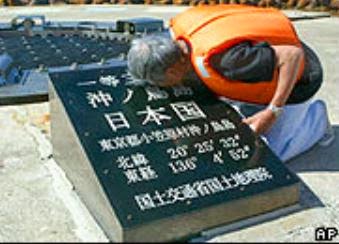 Except he’s not standing/kneeling/kissing the rocks themselves.  He’s standing on an erosion-prevention cap over the rocks.

Here’s the rocks, under the cap: 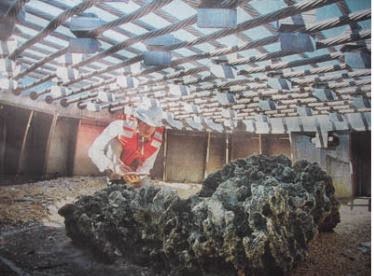 Anyway, Japan took this less-than-impressive, less-than-natural feature to UNCLOS and was able to get an extension of the Japanese continental shelf to Okinotorishima Island.  (Thanks to the creation of the Okinotorishima EEZ, the “Shikoku Basin Region” was a non-EEZ zone surrounded on all sides by Japanese EEZs, so I imagine that UNCLOS committee was relatively cavalier in assigning it to Japan). 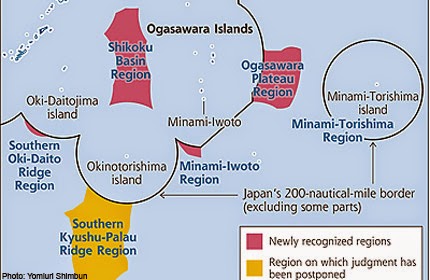 And Japan further used Okinotorishima to apply to UNCLOS for another southward extension of its continental shelf to the boundaries of Palau (the application is pending).

An article for a Japanese think tank, the Ocean Policy Research Council, by an admiral in the JMSDF declared that Japan’s EEZ grab was related to security: that it wanted to be able to “constrain” Chinese military vessels.   If this was indeed the intent, that dog may no longer hunt.  The United States has strongly asserted its right to send military vessels through the PRC EEZ to track PLAN submarines, and the PRC has apparently grudgingly accepted that point, so it would be difficult to exclude PRC military vessels from the Okinotorishima EEZ.  On the other hand, if PRC decides to get chesty again about US military vessels operating inside its EEZ, Japan’s massive EEZ holdings could be used to bottle up the Chinese inside the oft-invoked “first island chain”.

As to where this all leads, it appears that UNCLOS has been rather feckless in alienating ocean areas on the basis of dubious exercises in “islandisation”.  It is difficult—though of course not impossible—for China’s adversaries to criticize the PRC for adopting the Japanese precedent of jacking up an island and claiming an EEZ.

Perhaps at Johnson Second Reef, the PRC is cloning the Japanese “lilypad” approach displayed at Okinotorishima, not for military purposes but to assert rights to an EEZ.

As to the motive for doing this in the cluttered confines of the South China Sea, I would speculate that the PRC is looking forward to the day when it finally retreats from the anachronistic and ahistoric “nine dash line” (which has never even been surveyed; it’s literally just lines drawn on a map), turns on a dime, and presents a portfolio of territorial sovereignty and EEZ claims…that pretty much cover the same area.
Posted by China Hand at 12:58 PM

Follow our trades NOW and gain up to 270% daily.