The Obama Doctrine: Death By a Thousand Cuts


I was rather beguiled at first by President Obama’s commencement speech at West Point.

Not just because everybody else dumped all over it, and I wanted to exercise my contrarian’s prerogative to defend the indefensible.

It’s because the central premise—what I call the Obama Doctrine—is rather attractive to me:

Here’s my bottom line: America must always lead on the world stage. If we don’t, no one else will. The military that you have joined is, and always will be, the backbone of that leadership. But U.S. military action cannot be the only -- or even primary -- component of our leadership in every instance. Just because we have the best hammer does not mean that every problem is a nail.

President Obama’s unwillingness to employ military action against Syria or in the Ukraine is, I think, a reflection of his bedrock principle, his aversion to committing US military power unless it is absolutely necessary, a conviction that he has maintained at some cost against determined pushback by hawks within his administration, in Washington, and internationally.  No more Vietnams or Iraqs.

Unfortunately, the flip side of the Obama doctrine is that the United States remains committed to a forward counterterrorism posture and US“leadership” i.e. the ability to shape events overseas even without using military power.

Even when holding back on military power, there are plenty of ways for the United States to cripple a designated adversary.  There’s economic sanctions; financial warfare through the international banking, economic, and trade system; there’s subversion, through the Internet, through support of dissident parties and insurrectionists; there’s proxy wars. There’s JSOC. And of course, there’s drones.

And the most terrifying of all, the non-stop yammering of neo-liberal pundits advocating and excusing the latest US exercise in humanitarian intervention.

In other words, the United States still reserves the right to cruelly and counterproductively f*ck up any country with any and all means short of the direct commitment of US military forces.

Even if the Assad regime assiduously astro-turfed the massive turnout of refuge Syrians to vote at the Syrian embassy in Lebanon, I found it sad, moving, and pathetic that these people who had been driven from their homes were trying to show the world that they desperately wanted to live in a safer place where that election mattered…and at the exact same time the Obama administration was discussing plans to funnel more support to the insurgents in order to forestall their military defeat and a political settlement on terms that the United States deems undesirable. 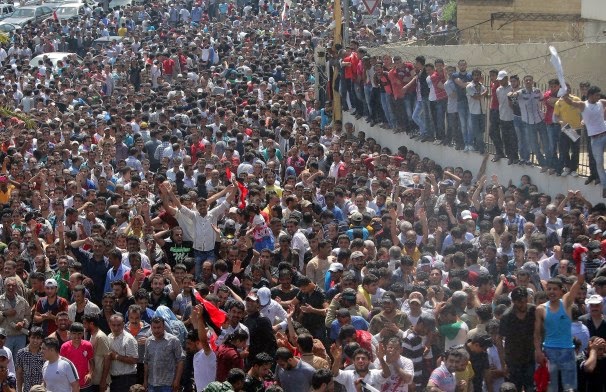 From an ethical point of view, is it a better, more humane policy to eviscerate a country slowly through sadistic proxies than simply to send in the troops and brutalize the locals briskly and efficiently and with some hope of genuine international oversight?

Looking at Syria, I don’t think so.
\
As a practical matter, I’m afraid the Obama Doctrine won’t fly as a matter of realist geopolitic.

Taking the possibility of US military action off the table in the case of lower-priority objectives undercuts the deterrent character of the US military machine.

I expect that the People’s Republic of China was interested and relieved at President Obama’s speech and its implications for the PRC’s aggressive moves in the South China Sea.

President Obama had a lot to say about “counterterrorism” and very little to say about “salami slicing” by a certain regional power.

He did obliquely compare China’s moves in the SCS to alleged Russian activity in Ukraine:

Regional aggression that goes unchecked, whether in southern Ukraine or the South China Sea or anywhere else in the world, will ultimately impact our allies, and could draw in our military.

In other words, I’m not doing sh*t in the South China Sea?  Blame the Senate.

If that remains the full extent of President Obama’s succor to Vietnam and the Philippines in their attempts to check the onslaught of HYSY 981 a.k.a. Rigzilla a.k.a. the PRC’s intrusive, EEZ occupying drilling rig and its sizable flotilla of ships, there are going to be some long faces in Hanoi and Manila.

Perhaps President Obama has decided that it will take some time to work up a systemic riposte to the PRC in the South China Sea, and he’s not going to rush ahead with some half-assed measure that “reassures” our allies + Vietnam, but risks being exposed by the PRC as another unenforceable “red line”.

It may be that President Obama has decided that if he can extract most US troops from Iraq and Afghanistan, that’s enough foreign policy legacy for his presidency and he doesn’t need to add a China war.  So he’s kicking the can down the road to the next administration.

The fully-formed China plan will, I think, come from a Hillary Clinton presidency.  The pivot is her baby, and she has convinced herself and her army of eager advisers that the key to US success in Asia is an aggressive China-containment policy underpinned by the idea of a credible US deterrent to undesirable PRC actions.

Well, judging by the PRC’s calculated defiance in the South China Sea, it might take more than US signing on the UNCLOS and pushing for the ASEAN Code of Conduct to deter the dragon.

So I don’t think President Clinton will be happy with the “Obama Doctrine” and the way it takes US military action off the table in non-existential situations.

A Hillary Clinton presidency might, I suggest, resurrect the Nixon “madman” posture, by which Nixon used the threat of extreme, non-proportionate force to try to get North Vietnam to forget that he had already committed to withdraw US troops and all they had to do was wait him out.

Maybe a “Hillary Clinton Doctrine” will look like “The United States will use all measures up to and including military force to ensure its economic and national security”.  We’ll see.

As Bob and Barbara Dreyfuss point out at The Nation, Hillary is a bottom-line hawk, and she wants all her coercive resources available for any situation:

[Robert] Gates took note of the fact that Clinton, as senator from New York, “had made friends with a number of high-level flag officers—three- and four-star generals and admirals—during her time on Armed Services.” She was, Gates noted, “an ardent advocate of a strong military” and “believed in all forms of American power, including force.”
…
[T]he Times adds that, after countless interviews, it is clear that Clinton was the administration’s hawk:

But in recent interviews, two dozen current and former administration officials, foreign diplomats, friends and outside analysts described Mrs. Clinton as almost always the advocate of the most aggressive actions considered by Mr. Obama’s national security team—and not just in well-documented cases, like the debate over how many additional American troops to send to Afghanistan or the NATO airstrikes in Libya.
Mrs. Clinton’s advocates—a swelling number in Washington, where people are already looking to the next administration—are quick to cite other cases in which she took more hawkish positions than the White House: arguing for funneling weapons to Syrian rebels and for leaving more troops behind in postwar Iraq, and criticizing the results of a 2011 parliamentary election in Russia.
And the Times quotes Dennis Ross, the pro-Israel advocate who worked for both Clinton and for the White House on Iran: “It’s not that she’s quick to use force, but her basic instincts are governed more by the uses of hard power.”

Either way, Obama or Clinton, it looks like American foreign policy will remain a meatgrinder for its enemies for the foreseeable future.

Did you think about trading with the #1 Bitcoin exchange service: YoBit.

Did you know you can create short urls with LinkShrink and make dollars from every visit to your shortened urls.

Claim free satoshis from CLAIM BTC Faucet. Up to 57 satoshis every 20 mins.

Ever try to automate your free satoshi claims by using a BITCOIN FAUCET ROTATOR?

If you're looking to buy bitcoins online, Paxful is the ultimate source for bitcoins as it allows buying bitcoins by 100's of different payment methods, such as MoneyGram, Western Union, PayPal, Visa, MasterCard, American Express and they even allow exchanging your gift cards for bitcoins.