I wonder when there will be a Global Truth & Reconciliation Commission to deal with the ruinous decision of the United States to partner with Saudi Arabia and the Gulf nations to cultivate, employ, exploit and/or unleash jihadism and religious sectarianism to destroy unfriendly or unhelpful secular/socialist regimes in Afghanistan, Iraq, Libya, and Syria.

Butcher’s bill so far: maybe 300,000 dead in Afpak & Iraq, another 200,000 dead in Syria.  Using a conservative wounded to killed ratio of 3:1, at least 1.5 million lives shortened or physically shattered.  Add another 8 million or so refugees for whom the social and economic fabric of their lives has been torn apart.

Judging by first impressions—that the United States will seek to contain and manage IS as an asset in its effort to unseat Assad in Syria, just as it used the IS threat to shoulder Maliki out of power in Iraq—America is unable to shake its jihadi addiction as it seeks to wield influence in the Middle East without putting “boots on the ground”.

Instead of demanding that Turkey attack IS on its vulnerable northern flank, or Saudi Arabia devote its sizable ground and air forces to the task of hunting IS down, it looks like the US is contenting itself with limited objectives, making limited demands on its regional allies (who are allowed to limit themselves to lip service concerning the horrors of the jihadi menace), and trying to put limits on IS’ threat to allies and assets without trying to organize any meaningful effort to restore the security and order it helped destroy in the Middle East.

My prediction: a “jihadi archipelago” in the Sunni regions of Iraq and Syria, maybe not the IS caliphate, maybe something post-IS, sustained by the cupidity, opportunism, and cowardice of the United States, Saudi Arabia, and their proxies and allies.

Hope I’m wrong, as they say, but until I am I’m going to continue to re-up this post concerning the prophecy of the president of the Soviet-backed Republic of Afghanistan, Muhammad Najibullah.

Excerpted from a longer piece I wrote in September 2009. 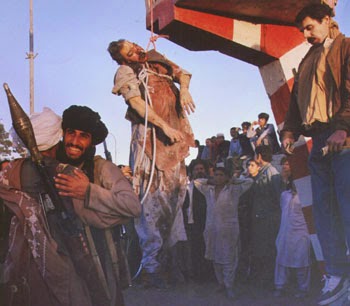 When the Taliban entered Kabul in 1996, they dragged Muhammad Najibullah from UNICEF compound where he had taken refuge three years before when a deal to extract him from Kabul collapsed, tortured him for hours with the special ingenuity that Afghani warlords apparently can always bring to bear on such situations, and hung his castrated corpse from a lamppost.

Sad they can't find his translation of the book!

Searching for the Best Dating Site? Create an account and find your perfect date.

eToro is the best forex broker for rookie and pro traders.