Nicholas Wilson and the HSBC Blues


I have a piece in CounterPunch magazine about the constellation of whistleblowers surrounding HSBC Bank, HSBC and the Five Whistleblowers.  Buy it!

HSBC has yet to be brought to book in any serious way for a litany of transgressions in multiple jurisdictions.

When I say “not in a serious way” while cognizant of the fact that HSBC got dinged with a $1.9 billion fine by the US government in 2012, it’s clear that I consider HSBC to be a dirty bank of impressive scope.

Again, my opinion, I think HSBC USA should have been shut down for the money laundering, sanctions avoiding, and garden variety fraud disclosed in the 2010 Levin report and by the contributions of at least two US whistleblowers.

It’s a pleasure to see my conclusions shared by the working level grunts in the Department of Justice.  The Republican side of the House Financial Services Committee issued a damning report on the handling of the HSBC case by Eric Holder, who overruled his prosecutors on the major legal sanctions they proposed and gave HSBC its pretty sweet deal instead.

David Dayen ran the story at The Intercept.  Good for him!  Haven’t seen anybody else pick it up.

The smoking gun, reproduced in the committee report, was a Dear Ben (Bernanke) letter written by the UK Treasury Secretary, George Osborne.  Osborne's declaration that hammering HSBC might cause global financial collapse was the justification for the decision to go easy on HSBC.

Funny thing is, couple years later, the US government pounded BNP-Paribas with an $8.9 billion fine and cut them off from US dollar transactions for a year.  The bank--and the world--survived.

So you have to wonder if shutting down HSBC’s US operation (which I characterized in my piece as a “dumpster fire of a bank” built on the less than heroic foundations of the acquisition of Marine Midland Bank ) would really have brought the world to its knees.

More likely, the UK just begged the US to do it a solid as America's bestie ally, and the US obliged.

It was also alleged but not confirmed that David Cameron flew to Washington and personally lobbied Barack Obama to go easy on HSBC when it looked like some serious, serious penalties were being bruited about.

HSBC is clearly a big, resourceful outfit that fights back when it’s threatened by regulators.  In addition to lawyering up, HSBC is allegedly not shy about wielding political influence.

The most detailed record of HSBC’s alleged employment of influence to block unfavorable coverage and inconvenient investigations is provided by the English whistleblower in my piece, Nicholas Wilson.

Which means, apparently, that he must be determinedly ignored and, when necessary, dismissed as a crank.

The fiddle that Wilson objected to and attempted to bring to the attention of the authorities relates to HSBC’s disastrous foray into the downmarket world of consumer finance.  During the pre Great Recession go-go years, HSBC bought the U.S. Household Finance Corp. (which was down on its financial and regulatory luck thanks to extensive predatory lending litigation) and looked to fix it up to become a player in the profitable world of lending money to poor people at high interest in the UK as well as North America.

The adventure ended in disaster, but its consequences live on.

One wrinkle HSBC brought to the business in the UK was, when it came time to collect from tardy borrowers, having the solicitors handling the work add a 16.4% charge to the outstanding amount and deduct their expenses from the recovery.  This contingency arrangement is not supposed to be done, since it creates an improper incentive for the solicitors to get aggressive and cut corners to get their money.  The client—HSBC—is supposed to pay the solicitor for its services whether or not recovery happens.

Wilson, one of the lawyers involved, advised his firm and HSBC that the arrangement was illegal in 2003.  As a result, he became a pariah (his web handle, “Mr. Ethical”, was a term of mockery employed by one of his colleagues) and exited his firm in 2006 for a life of frustration and severely straitened circumstances as a whistleblower.  Thirteen years after the original incident, Mr. Wilson is near the end of a long and rather frayed rope.

HSBC’s solicitors continued to impose the contingency fees until 2010 when the UK government’s Office of Fair Trading confirmed Wilson’s original finding against HSBC that the charges were improper.

Redress for customers and vindication for Mr. Wilson have not been forthcoming.

The finding that the charges were improper simply instructed HSBC and its solicitors to cease applying them.  The ruling did not address the fact that HSBC, thanks to Mr. Wilson, had been aware of the illegality of the charges seven years prior, and provided no mandate for HSBC to clear up its past mess—or, indeed its ongoing mess.

Needless to say, refund of previously collected charges was not on the agenda.

Wilson tried to change that, bringing the case before a multitude of government agencies.

It appears the bank is not interested in opening this can of worms, which would involve refunds of payments and interest to injured customers of up to £1 billion by Wilson’s estimate.  It is helped by the rather Swiss-cheesy/loophole ridden nature of the British laws relating to business conduct, and the fact that the British regulatory and criminal authorities evidently have no interest in pursuing this case.

The determined, perhaps even malicious buckpassing between the Serious Fraud Office, Financial Conduct Authority, and City of London Police (City of London, not Metropolitan London; the City of London is the bankers’ own little corner of heaven and has its own police force) as to who should pursue Wilson’s allegations (answer: not me; somebody else) are darkly amusing, if you don’t happen to be Nicholas Wilson.  If you are Nicholas Wilson, it’s an excruciating hegira of frustration and futility
.
“Regulatory capture” i.e. the enthusiasm of government departments for doing the bidding of the corporations they are expected to watchdog, is an old story in the United States, as is the immense policy influence wielded by the executives of the “Too Big To Fail” banks.

Same in the UK, apparently.

In one documented instance the British government responded to an inquiry concerning Wilson’s allegations by cut-and-pasting HSBC’s own Public Relations Department boilerplate into its email reply.

Mr. Wilson’s as yet unsuccessful efforts to bring HSBC to book has made him a close observer of what is apparently an unprecedented symbiosis between David Cameron’s government and HSBC, one that ensures that HSBC receives VIP treatment both from government agencies and the British media.

The intimate relationship between HSBC and the Tory government is pretty well documented by the elevation of HSBC’s chairman, Stephen Green to a Lordship and Cabinet post by Cameron, and by HSBC taking on Jonathan Evans, the head of MI5, as a director when he left his government job.

The most irregular HSBC-related move by the Cameron administration involves the appointment of Rona Fairhead as Chair of the BBC Trust.  Fairhead was a HSBC US director at the time of the $1.9 billion unpleasantness.  Subsequently, she was parachuted into the job of Chair of the BBC Trust by some high-level jiggery-pokery (it’s a civil service post with a mandated open search; Fairhead was never shortlisted for the job but somehow got it).

This appears to be an exercise in elite charity.  Well, maybe a coverup.  Fairhead, as the HSBC director who had headed HSBC’s audit and risks committees, had to take the fall for the massive tax evasion scheme run (apparently without the inconvenience of an audit) out of HSBC Switzerland and revealed by yet another whistleblower, Herve Falciani.

One can imagine that it was a matter of some interest that Fairhead a) leave quietly and b) end up in a comfortable berth, thereby sidestepping the imputation that she was being purged for culpable involvement in a catastrophic, systemic shareholder-suit-worthy failure originating not only at the very top of the enterprise but in the directorate charged with protecting the interests of the stock-owning punters.

The continuation of her directorship (and its £334,000 in compensation) while she did her BBC job (her official departure from the HSBC board finally occurred at the 2016 annual meeting) no doubt contributed to her sense of satisfaction with HSBC’s treatment.  As did the additional £110,000 per annum she received for working a three-day week at the Beeb while winding down her career at HSBC.

According to Wilson’s observation, negative coverage of HSBC has essentially vanished from the BBC since Fairhead came on board.

As he points out, one fallout of the American unpleasantness was a lawsuit by survivors of victims slaughtered by the Mexican narcos who were laundering money through HSBC (the favored branch, by the way, installed special enlarged teller windows to accommodate the standard-sized boxes of cash delivered by the gangs for deposit).

Everybody else reported it.   Everybody but the BBC, that is, judging by Google.

It pays to be a close observer to document the atrocities.  For the Internet impaired, BBC Radio 4 describes the front pages of the various British papers on its nightly radio show.  On July 25, 2015 it told listeners that The Sun was leading with an exciting story on how British shops might be allowed to stay open 24/7, “the biggest High Street shakeup in a generation”.

According to Wilson, the actual front page was this: 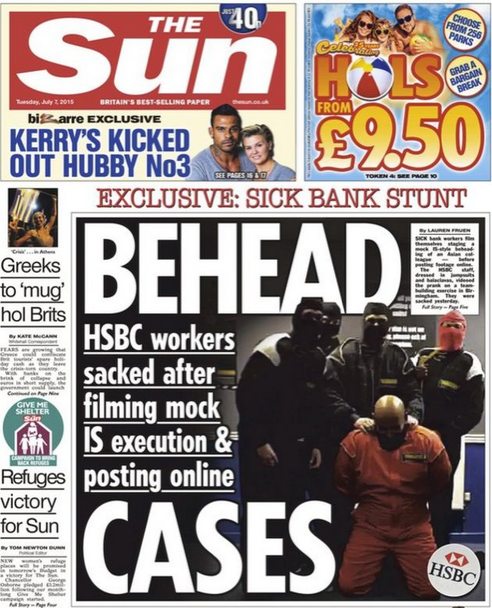 Not just the BBC.  Coverage of Wilson’s allegations are virtually non-existent in the UK, not necessarily for lack of interest.  According to Wilson, both Private Eye and the Sunday Times completed investigatory projects that never saw the light of day.

One possible upside to the Brexit cataclysm is that, maybe, in a few months the UK, or what’s left of it, will have a Labour government under Jeremy Corbyn, and regulators interested in using their powers to investigate the dealings of HSBC.

That’s a hearing that Nicholas Wilson and the victims of the HSBC scheme, who’ve been waiting—and paying—for over a decade, deserve.

It also would provide another window onto the dark world of HSBC, one that I think the world could use.

You can view Wilson’s extensive dossier on his case at his website, Mr. Ethical.  And you can support his work with a contribution.


An excellent overview of the whole sordid business. For wider academic report on British decline read "How Corrupt is Britain" from Liverpool University.

Excellent piece. Nicholas Wilson has done an amazing job and is still fighting for what is right with no support from mainstream media. The BBC news coverage is a disgrace now.

BlueHost is ultimately one of the best website hosting company for any hosting services you might need.