I have a piece up at Asia Times, China has right to declare ADIZ in the South China Sea.  A bit more in your face than my proposed title but a) essentially true and b) not a bad idea improving coordination in zones abuzz with contentious military presences and missions and c) decent clickbait.

And here at China Matters you get the maps. Here's a close-up of the US ADIZ in Alaska.  Note it pretty much abuts Russia's 12 mile territorial limit in a few places. Take that! 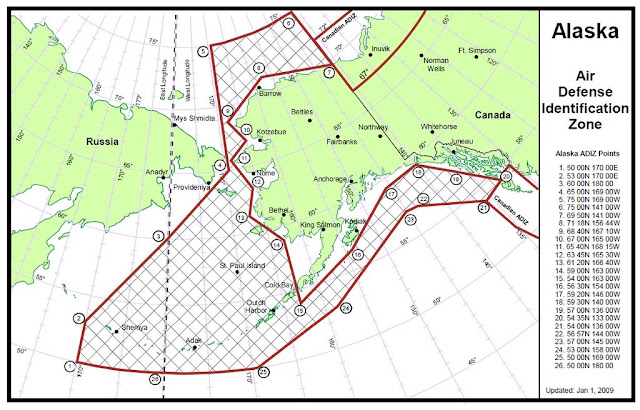 The North Atlantic ADIZ, until recently enforced by a US interceptor group out of Iceland (now NATO's job): 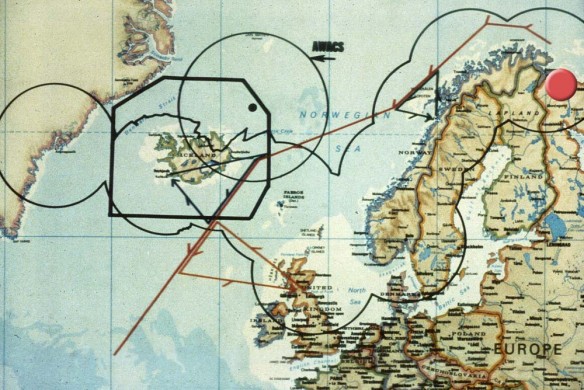 The East China Sea China ADIZ/Japan ADIZ/Korea ADIZ mash-up.  Note in 2013 South Korea took advantage of the manufactured uproar over the China ECS ADIZ to stealthily enlarge its KADIZ to overlap with the JADIZ (see the dotted green line for the enlarged zone).  In fact, part of the KADIZ extension is a triple overlap with the PRC and Japanese ADIZs.  Overlaps are OK! 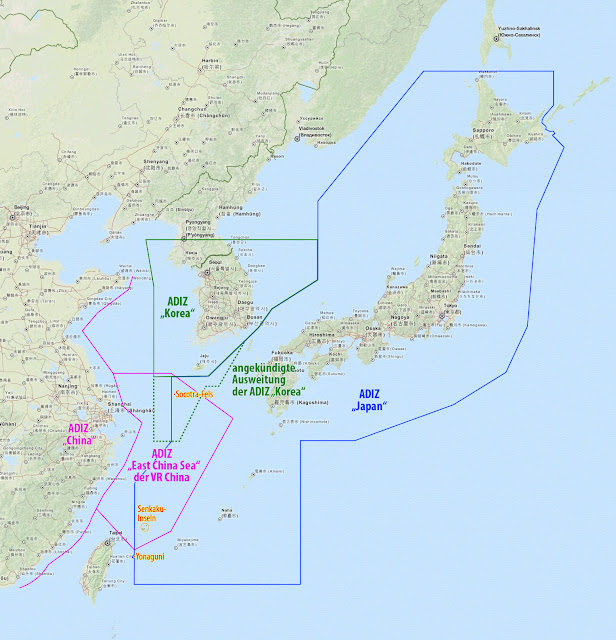 So OK, Japan did it in 2010, when it unilaterally and with no prior consultation extended its ADIZ to overlap with Taiwan's (yes, Taiwan has an ADIZ, too!) to provide cover for its new military installation on Yonaguni Island (and express its disapproval of the incoming Ma Ying-jeou administration's pro-mainland tilt): 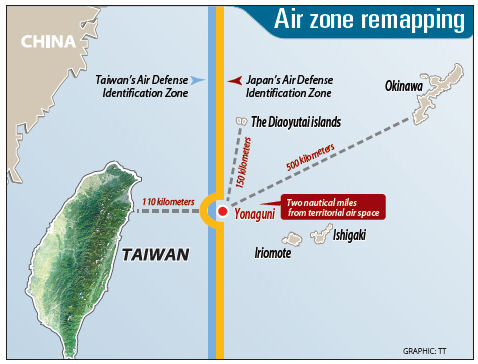 Here's the "hope is not a plan" Taiwan ADIZ extending over the Chinese mainland.  This image, courtesy of the CSIS AMTI, has all the updated ECS boundaries.  I found CSIS discretion in not highlighting the absurd Taiwan ADIZ...refreshing. 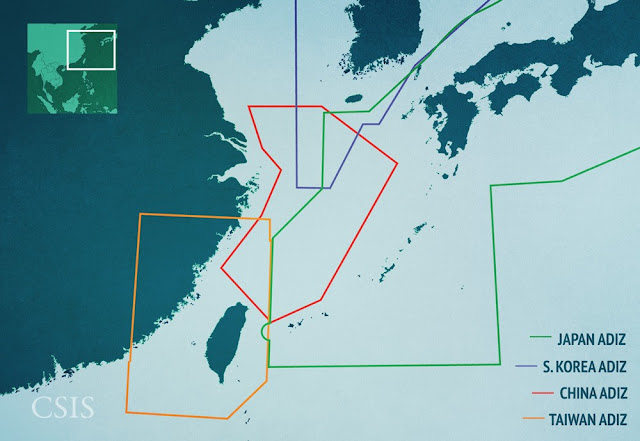 And, as a revelation to me, the Philippines has its own ADIZ in the SCS: 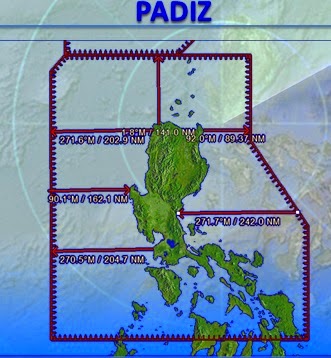 And as a further revelation, Vietnam's got one too!  No map I could find, unfortunately.  Just a general statement in the Financial Times circa 2013:

But Gary Li, a senior analyst at IHS Maritime, said a Chinese ADIZ in the northern South China Sea would be “very, very sensitive”. He said it would almost certainly overlap with Vietnam’s ADIZ, which reaches north to about 100km from Hainan Island, and includes the disputed Paracel Islands.

Many, if not all of these ADIZs have roots in US flight controls (the original Japanese ADIZ, for instance, was set up and administered by the US until 1973, then the Japanese government took it over and expanded it; the Philippine and Taiwan ADIZs seem to have their antecedents in the US onetime "military assistance" operations; finally, today it's little remembered that the South China Sea was an American lake for surface, sub, & air operations during the Vietnam War, and I wouldn't be too surprised if that tradition carried on to the "VADIZ").

So maybe the Pentagon sees ADIZing as a uniquely US prerogative not available to presumptuous adversaries.

And, just maybe, the US would find it awkward from a pivot optics point of view if the PRC declared an ADIZ, everybody else revived or declared their ADIZs, and USAF was in the awkward position practicing its ironclad policy of "flying wherever it wants to whenever it wants to" outside of territorial airspace holdings , thereby telling not just the PRC but much of ASEAN to go f*ck itself.

In any case, I fail to find any strong legal justifications for denying the PRC an ADIZ in the SCS.  On the contrary, per my AT piece, my feeling is "the more communication the better".

In unfinished business, I was unable to find a map displaying the Greenland section of the ADIZ picket line between the North Atlantic section run out of Iceland and the ADIZ covering the continental US.

I would think there would have to be something, because the US went to great expense and effort to build the air base at Thule in northwest Greenland in the 1950s to host US strategic bombers that, at that time, could not reach their targets in the Soviet Union from North America.  And presumably vice versa was true, and the US had some ADIZ like protocols to control and intercept Soviet aircraft that might have an interest in taking out Thule.

However, US security relations with Denmark (which administers Greenland today as a county) are fairly murky/hinky and I wouldn't be surprised if there was some protocol turning over administration of a Greenland regional ADIZ protecting Thule to the US.

Thule's strategic importance survived the decline of the strategic bomber leg of the triad.  It operates big, big radars pointed Russia (and I guess maybe China?) way.  When the job was to pick up Soviet missiles, the radar was an analog monster as big as a football field turned on its side.  The system was directly wired into NORAD's main computers in Colorado and maintaining that link, by airborne relay if necessary, in the face of weather and fear of Soviet interdiction was a major obsession. 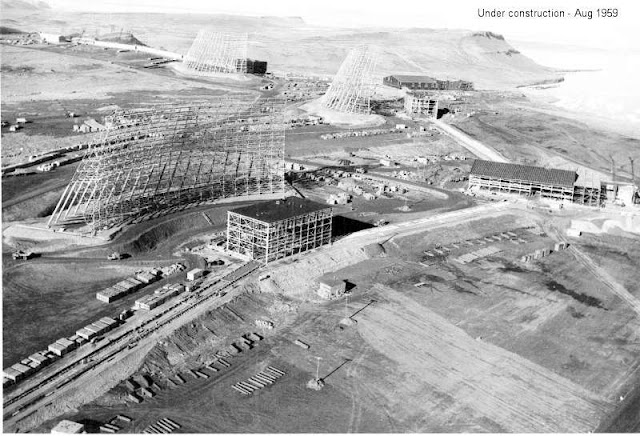 Tube amp aficionados will love this description of the 1960s vintage BMEWS ("Ballistic Missile Early Warning System") and the fun anecdote of the day the moon rose in the wrong place, the ultra-high energy radar painted it, and the huge return crashed the NORAD system and caused the great doors at Cheyenne Mountain to be closed for several hours "while analysts tried to determine the cause of the fiasco".

Nowadays the radars are solid state and watch the skies to track satellites and serve the Star Wars missile defense boondoggle. 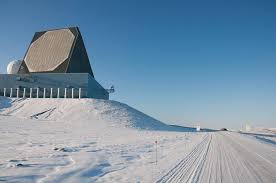 A final note: in the first version of the AT piece, I incorrectly declared, with maximum dudgeon, that Okinotorishima Island, the stain of the West Pacific, even had its own ADIZ.  Wrong!  I misread the shadings on this map. 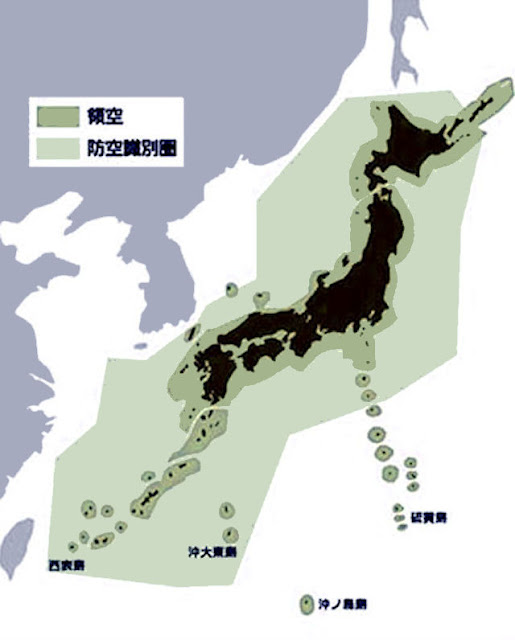 Oki's got its own territorial airspace per its 12-mile limit but no additional ADIZ.  The ADIZ is the lightest-green shading; Oki (the blob at the very bottom) is surrounded only by the darker "territorial airspace" green.  Apologies!  The reference was deleted a few hours after the original post went up.

Many thanks for that legwork. Most informative. Expect to see the NYT pick it up and run it on tomorrow's front page.